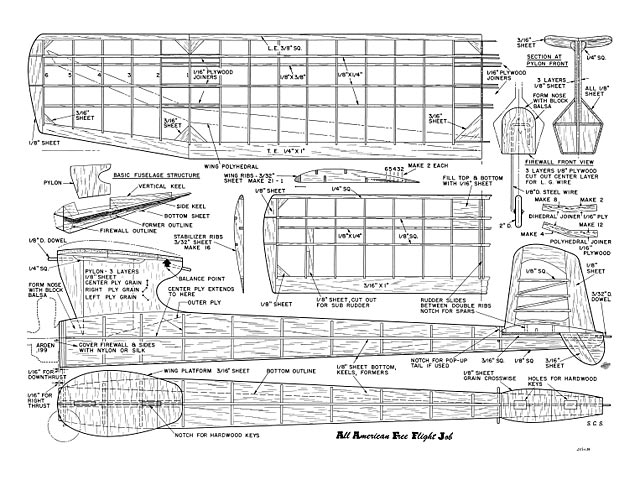 This is a Bill Winter design, drawn up by Cal Smith. Appeared on Air Trails Pictorial, June 1950.

Quote: "Editor's Note: One of the greatest comebacks ever staged in model aviation has been the return of free flight. Actually, it never went very far away, but the tremendous growth of control line activity directly after the war resulted in the free fighters being forced to take a back seat at contests. Now a better balance seems to have been struck with the result that all phases of aeromodeling have advanced tremendously during the past two years. The hobby-sport offers diversification as one of its main attractions - when one section overbalances the entire field as U-control did in 1945 and 1946, activity suffers. Here, then, is a round-up of national trends in free flight jelled into one model. The All American, by Bill Winter.

Free flight, about the last frontier for the rugged individualist modeler, is the one competition category where overall dimensions, loadings, and shapes can be varied to suit a fellow's ideas. Speed jobs have come down to finless, helmet-cowled, clipped-wing bullets, as similar as peas in a pod. Stunters have grown bigger, lighter, and stumpier. Indoor jobs, at least the ones that in, look generally the same as they did in the days before U-control. To win, you must conform - except in free flight!

Yet you can't go at free flight willy-nilly, for certain schools of thoughts have proved effective trophy winners. Charlie Folk's Climax (oz8071), for example, is an extremely short-coupled, big-tailed, high pylon. Paul Gilliam's designs are long and thin. Dennie Davis' 'middle-of-the-road' models come between the two. And there are others. Now the remarkable thing about many of these standout airplanes is that a designer may state that his approach is the best, if not the only, way to win contests consistently. Each is right, given his typical sectional weather. In Eastern winds, try to beat a Climax bouncing and turning on a dime. On a genuine sunny California day try to better a Civy Boy (oz5500). For average weather those 'middle-of-the-road' airplanes should consistently outpace the others. A lot depends on where you expect to compete. And there are other factors.

An analysis of all free flight winners of both the Nationals and the Plymouth meets, and of standout designs over the past year, tells a highly interesting story. Not only are certain types at an advantage in certain sections of the country, but concrete facts on loadings, aspect ratios, and other pertinent features add up to very definite combinations when these facts are substituted for hearsay.

Most disputed point in free flight is wing loading. In other words, you'd expect the greatest variations in wingspans and areas. Yet, an average of dozens of airplanes reveals that a solid eight ounces wing loading per square foot is winning the most trophies. Nor is this average the result of extremes, such as four ounces and twelve ounces; a cluster of big-name ships comes in at from seven to nine ounces and most of these hover around eight.

Such statistics could fill a book. But what do they add up to? To find that answer, five designs were worked up, four of them shown in three-view and 'model-of-a-model' form, and the fifth was completely worked out, built, and test flown. This ship most nearly illustrates the average contest winner re-gardless of section. It is most interesting to note that this machine very closely approximates the out-line and weights of Dennis Davis' San De Hogan (oz5350), both being powered by a .199.

Plane #1: let's call this the Easterner. It is a near composite of Folk's Climax and Carl Wheeley's Senator (oz8377) and would be a sterling windy-weather machine. Its stabilizer area is about 50% of the wing, and its tail moment arm on the average is but 40% of the span. The pylon is quite high and the leading edge of the wing forward of the engine. The single-wheel gear shown might be made retractable, or can be replaced by a two-wheel gear if preferred. While no particular type of fuselage is standard, it does seem that the diamond cross section is used most often.

In order to make all these 'models of models' directly comparable, aspect ratios of six to one are used in every case. The builder can vary these to suit his own ideas, but it would be well to keep in mind that the great majority of winners have aspect ratios of six or seven to one.

Plane #2: the Californian (with apologies to dissenters!). This is the long moment-arm flat-gliding, moderate pylon job representative of the Gilliam school of thought. A 50% stab is set on a 50-60% moment-arm fuselage. These ships actually follow the long fuse indoor gliders and under proper conditions have an ideal glide. Yet they are not too lightly loaded - or oversized - to handicap climb. One wheel is favored.

Plane #3: the Shoulder Wing. Generally frowned upon as inferior to the pylon as a means of handling power, the shoulder wing has, nevertheless, been proved by such builders as Don Foote and Jerry Brofman. It is a type of model thoroughly acceptable in the larger sizes, as indicated by Brofman's consistent winning at the Nationals. Foote has proved it acceptable in all sizes, his latest being a .19 job (now flying on a Forster 29) of fairly high aspect ratio, wing loading, but with fairly small moment-arm and tail area. Usually fitted with two wheels.

Plane # 4: the Hatchet. You can't count this one out, for it is a type that has given birth to many of our best airplanes through the years. Examples: Banshee (oz1192), Zomby (oz68), Pacer (oz8073), Cumulus (oz5368), and so on. Actually, it is a form of low pylon layout, with the pylon being stretched out as part of the fuselage. It offers the advantage of fully enclosed engine without excessive cross-sectional area. Both one and two wheels are popular.

Plane #5: let's call this one the All-American (see construction plans). It is a composite of famous pylons and, for the average, includes the ideal aspect ratio, moment arms, areas, and weights. This is an A job with a big engine in its class.

The American's span is 54 inches, its wing area 384 square inches. The stabilizer area is 38-1/2% of the wing area and the tail moment arm is 39% when figured from midchord of wing to midchord of stab. Glow ignition is used but if the ship is built as shown with light covering it will be underweight, permitting the addition of any timers and gadgets without penalty. And it won't be at a disadvantage if you prefer spark ignition. While the fuselage was built up of both vertical and hori-zontal sheet balsa keels and bottom, with sheet siding, a built-up 'box' could be substituted. Although a flat-bottomed, fairly thin airfoil was used (many builders believe this is the best means of getting maximum altitude) glide is exceptionally good. It would be difficult to achieve more of a floating glide without making the ship impractical for even a moderate wind.

If you look for rule-of-thumb clues for your next model, these five ships cover the ground fairly well. But, if you are a real individualist you can at least use them to hit upon something different, for these are the machines you have to duck to be different! While the pylon is the king it is not necessarily fatal to try something else..." 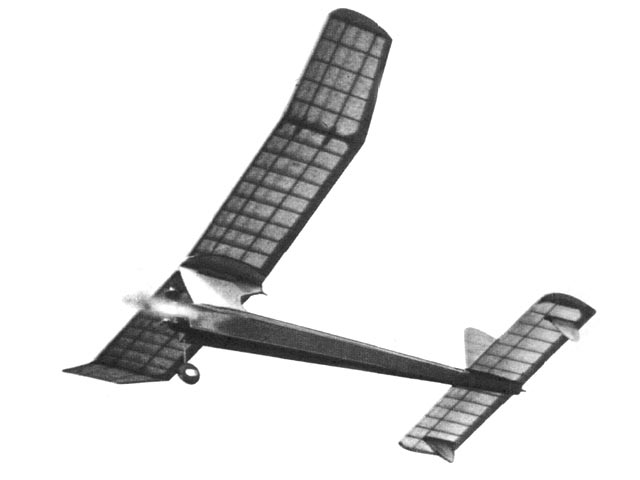