Quote: "Graduate with top honours after building this popular design from the heyday of controline. Sized for a .25 size 2-stroke

A little history: The Testor Chemical Company of Rockford, IL has been providing quality products to the model building market for nearly 60 years. In the early 1940's Testors cement (notice there is no grammatically correct apostrophe in the trademark) was the preferred brand by many of us, mostly because the tubes were thicker and less prone to rupturing than other brands. An embarrassing amount of clothing was permanently scarred with Testors cement back then.

In checking old magazines the first ads I could find for the cement were in Air Trails 1942, but I dis-tinctly recall using it much earlier. In 1943 Testors added dope in multiple colors which, of course, were nitrate based, which would become a considerable problem when the glow plug was introduced in 1948.

Testors introduced a series of solid scale models in 1944. What made these memorable was the B-17 and later B-29 models which were all pre-shaped (router-cut?) pine. They were pre-fabbed to the point of needing only sanding, assembly, and painting. These solid models were the earliest truly prefabricated models this writer can recall. They sold very well from retailers such as JC Penney and Sears, and were in many ways the precursors of the injection molded plastic display models of today.

Control line flying simply exploded in popularity after WW II: suddenly there were flying circles, as well as hobby shops, in nearly every town. Contests and get-to-gethers were held within a few hours drive every week-end of the flying season and often with duplication. The local and national press covered modeling extensively, and sales of kits and engines were at all time record highs. Numerous factors combined to perpetrate this explosion of interest in control line, not the least of which were the returning GIs with lots of spendable cash, renewed availability of consumer items of all kinds, and perhaps the most inportant of all: the introduction of the glow plug by Ray Arden in 1948. No longer was itecessary to stuff an ignition coil, condenser and batteries in a relatively small model.

Testors jumped onto this marketing bonanza in a big way starting in 1949. In that year they introduced two sizes of TC-2 trainers in April..."

Note if anyone out there can submit a scan of the original Senior 29 plan from circa 1950, then we'll split this into 2 listings. 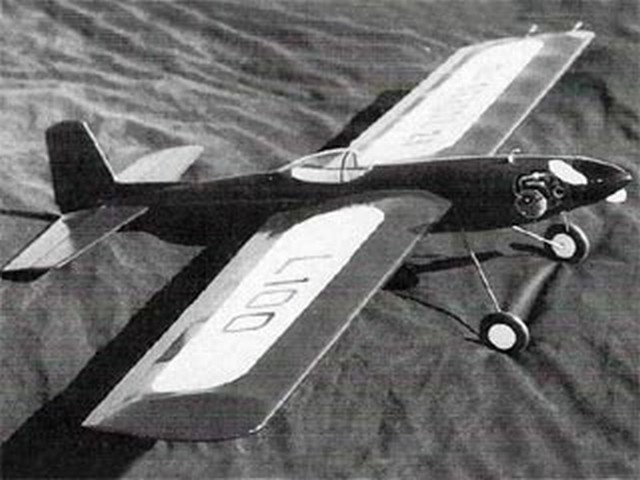