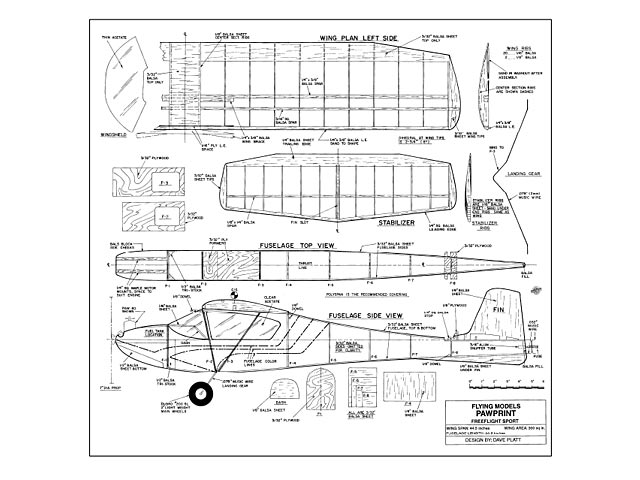 Quote: "Back in another lifetime, modeling-wise, there was a magazine named Air Trails. This was in the Golden Decade of aeromodeling, the years from 1945 to 1955. Air Trails featured two full-size pull-out plans each month, and in one issue (1/49 for those interested) there appeared a little sport F/F model called Pleasair (oz8999). Designed for CO2 power, the model was necessarily lightly built and perhaps a shade fragile for the sport purpose. Nevertheless, several friends and I built multiple Pleasairs and enjoyed them greatly.

Our Pawprint (the name is a wordplay derived from its first powerplant, a PAW diesel) doesn't resemble the Pleasair in the least, either in appearance or structure, but the intent is the same. This time, however, a few key changes have been made to enhance durability and reduce or eliminate hazards during trimming.

Construction is simple and rugged. A sport model must survive all manner of abuse, so wood sizes are generous. I recall a friend of mine in England remarking: I have noticed that a slightly heavier model will always fly better than a lighter, broken one.

Ease of trimming. I feel that a sport model's initial flights need to be kept to a very moderate pace. While this isn't true for contest pylon models, where full-power-and-a-short-run are the safest, the sport model's first flight ought to be scarcely more than an extended hand-glide. Until now, the typical .049 sport F/F model has ranged from 32 to 36 inch span. At this size, it is vastly over-powered for its purpose. To make matters worse, the cabin shapes that modelers like in a sport model are not as inherently stable and forgiving as the pylon layout. The result is that trimming becomes a sweaty process and dangerous to the model, with disaster never far away. Rapid rate of climb is not desirable in a model of this type. On the contrary, slow altitude gain gives more time to appreciate the plane in flight and allows longer engine runs.

The remedy is simple: make the model bigger. The Pawprint is 44 inch span. Suitable power can range from a .5cc (Dart or PAW 03) through a Mills .75, and on up to a .049; even a lcc if it's "elderly". But take care, not all engines are created equal. An ED Bee from 1947 has probably half, or less, of the power of a modern MP Jet of the same type and size. Some of today's very powerful glow .049s will require patient trimming since they don't readily throttle back. Often, a good answer to this is to put the prop on backwards at first. An even better answer might be to install a diesel.

Diesels have long been favored for sport F/F models (and F/F scale) due to their willingness to run at slow speeds and on large props. This helps enormously on those first flights. Then later, a PAW 80 or similar unit, chugging away on an 8-4 prop that a typical .049 glow won't look at, will give hours of fun..." 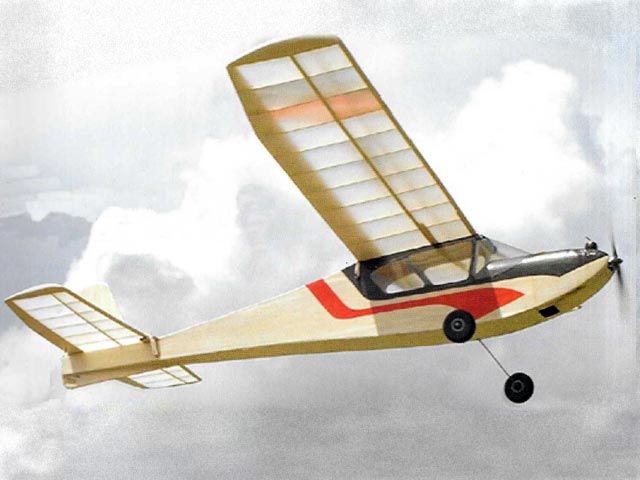