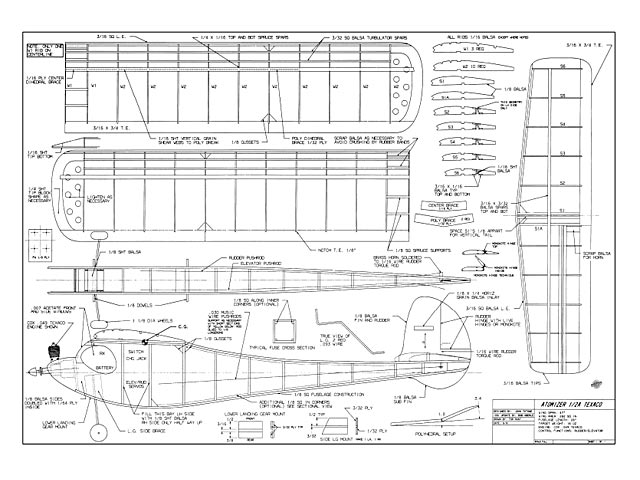 Atomizer 1/2A Texaco. The original FF Atomizer model was designed by John Tatone in 1941. This here is a later RC version for 1/2A Texaco by Bob Aberle. Wingspan 47in, wing area 282 sq in.

One of the most popular old timer events to surface in recent years at Society of Antique Modeler (SAM) competitions, is 1/2A Texaco. The reason for this popularity is the basic simplic-ity of the event itself. It centers around the use of an inexpensive, off-the-shelf, Cox .049 reed valve engine, a two channel radio system, and a relatively small size, easy-to-build, and easy-to-transport model. The small size and slow flying speed of these models make it attractive for even the rank beginner to fly in competitions. In many respects, the element of luck equally offsets skill and experience.

SAM 1/2A Texaco Rules. The rules are simple, but it is always nice to start with a reference point. As stated in the Society of Antique Modeler Rule Book, the model itself must have been designed, kitted or had plans published prior to Decem-ber 31, 1942. The actual 112A Texaco model of your choice can be scaled up or down from the original design. The internal structure may be changed at the modeler's discretion, but the outline, moment arms, airfoils, etc, must maintain a direct scaling from the original. A minimum wing loading of 8 ounces per square foot is specified. The maximum propeller diameter is 8 inches. You are limited to a Cox .049 reed valve type engine with an integral fuel tank of not over 8 cc capacity. This primarily limits you to the Cox Texaco engine, the Golden Bee, or the Black Widow models. Diesel conversions or throttles of any sort are prohibited. The only modifications allowed are as follows: moving the fuel pick-up tube from the middle to the bottom of the tank, addition of a muffler, and or, addition of a needle valve extension. You also must use a commercially available glow fuel.

Basically you run the tank dry. The longer the motor run you obtain, the better off you will be. Maximum total flight time is 15 minutes (sum of engine run and glide). Three attempts are allowed to make two scored official flights. In other words, a perfect score would be 30 minutes.

Some practical facts. Your favorite 'garden variety' 1/2A Texaco model over the years has evolved into a model with an average wing area of 300 square inches. That's reasonably large when you get right down to it. To be competitive you will have to build to the 8 ounce/square foot minimum wing loading, which works out to 16.7 ounces (for 300 square inches of wing area). Most flyers use the maximum 8-inch diameter prop, to keep the speed down on the little Cox engines to around 7,000 rpm.

At that speed, you should be able to obtain a motor run in excess of five minutes. The idea is to keep the motor running as long as possible and at the same time to gain enough altitude to catch a thermal for the remainder of the flight. One of the biggest problems with these little models is losing sight of them at high altitudes. Because of that fact most modelers try to use a bright and highly visible color scheme. The element of luck mentioned earlier involves: 1. keeping that Cox engine running properly for as long as you can, and 2. finding a thermal.

Choice of model. There are quite a few kits on the market designed expressly for 1/2A Texaco competition flying. There has also been a number of 1/2A Texaco designs published in the model press over the past few years. But the fact of the matter is that several designs have emerged as the popular ones, like the Anderson Pylon (oz3164) and the Lanzo Bomber (oz6799), to the exclusion of almost everything else. These two designs are consistent winners and hence the reason for being so widely copied.

But, as you must know, I like to always do the different thing. I like to set the pace, rather than be a follower. Reading through a Model Builder magazine last year (September 1990, page 31) I came upon a photo of a John Tatone design, called the Atomizer. The photo caption included the comment: A seldom seen 1941 design.

At first glance the model looked something like a cabin version of John's Frisco Kid (oz8998) which he flew at the 1954 International FAI free-flight competition, held at Westhampton, Long Island. I revisited that particular Tatone design in the August 1989 Flying Modesl. Since John is a long time friend, I called him and got a chance to talk about his little Atomizer. He did design it in 1941 for the then new and very small Atom .09 ignition engine. The design also included a set of floats to be used for ROW flying... " 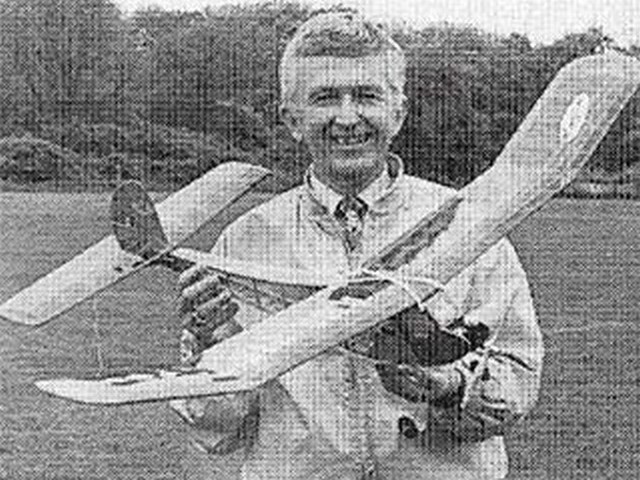