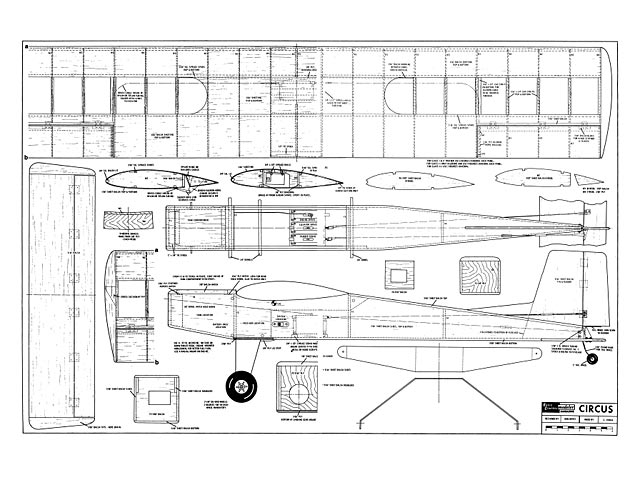 Quote: "CONSIDERING today's trend toward sleek, streamlined, jet-like designs, as well as the technically excellent series of articles on the aerodynamics of Class III aircraft currently appearing in RCM, the Circus seems strangely out of place.

At this point in most construction articles, the author tells you the why's and wherefore's of his particular design. In a great majority of the twenty or thirty designs submitted to RCM each month, the individual writers have some sound reasoning behind their particular configuration. Being exposed to all of this engineering and aerodynamic data each month, you would naturally assume that the editor of this rag would be a veritable font of information. Just so you won't be disappointed, here is the scientific substantiation behind this radical new design.

A few months ago, Whitey Pritchard submitted a design called the Praying Mantis (oz7703). As you may recall, this was an all sheet-canard, resembling the XB-70. After accepting the article and plans, I turned them over to Dick Kidd, our Technical Art Editor, then rushed out and bought all of the 3/16 sheet in town. When Dick finished the plans and brought over a blueline so that I could finally build Whitey's creation, I found the whole thing was built out of 1/4 sheet! At this memorable point in history, Chuck Cunningham called from Texas and remarked that he would give $2 to anyone that could design an uglier airplane than my Royal Coachman (oz1302). With such an incentive, and a rather larger pile of choice 3/16 sheet on hand, the Circus began to evolve.

The first step, of course, was to design the all-important wing. After all, airfoils have been the subject of a great deal of discussion, and it certainly wouldn't do to have anything less than the sum total of all that was known about airfoils. With this prerequisite in mind, I called Jack Doty at Foamcrafts and asked him what type of foam cores he had laying around in a shoulder wing configuration. After giving him the design criteria of a span between 50 and 72 inches with a-little-but-not-too-much dihedral, between 10-20% thick, and with either a symmetrical or semi-symmetrical section, Jack cried for a short while, then shipped down what looked suspiciously like a deBolt Jenny core with half the dihedral taken out. The shipping box, however, was marked Dewey Special, so my ego was satisfied.

The next step was to trace the airfoil section on a piece of paper and design a fuselage around it..."

Update 05/08/2017: Doh. Thanks Rudy. Replaced this plan with the correctly scaled version at 57in wingspan. 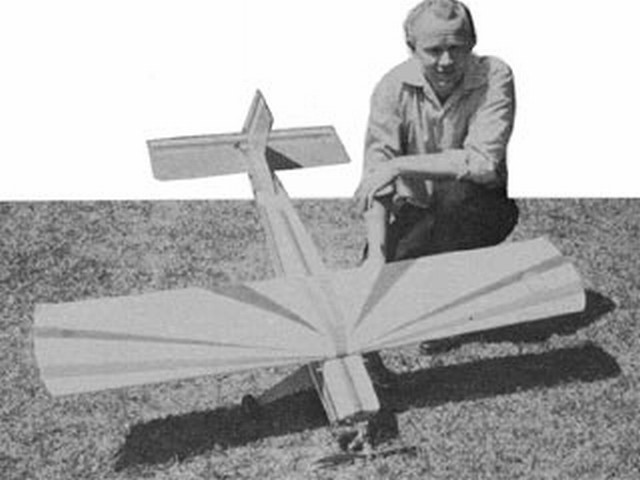