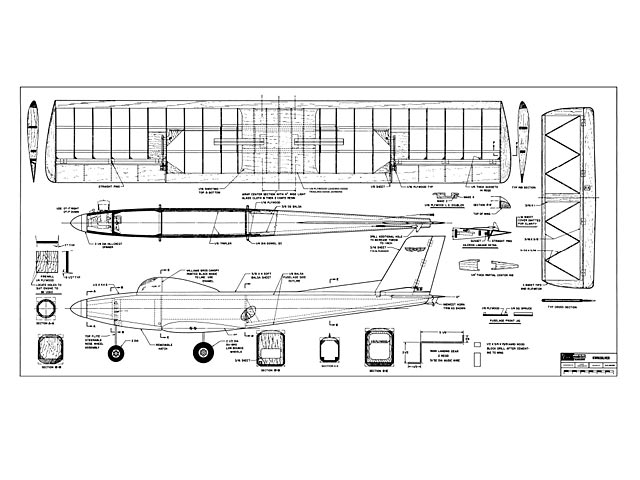 Quote: "A .40 powered compact multi that ranks with the best in competition machines. Wing is modified Falcon 56

A .40 powered, compact multi that ranks with the best in competition machines. Wing is modified Falcon .56.

IT would be nice to begin this article by stating in typical fashion that this is a contest winning airplane that has filled my home with trophies and is the answer to the stunt flyer's dream. However, this would not quite be the truth! Although the Kwiksilver is capable of flying the entire AMA pattern, and flying it very well ineed, I have never entered it in an R/C contest and have no immediate plans to do so. Rather, I fall into that huge mass, loosely classified as 'Sunday Flyers' and enjoy this phase of R/C very much. This should not be misconstrued to mean that there is a significant difference between a good Sunday Flyer and a good pattern airplane, for I feel that most flyers will agree that there is little difference in the flying characteristics of the contest plane vs. the sport plane, if both are sound designs.

After progressing from single channel escapement through pulse rudder, gal-loping ghost, and 10 channel reeds (none of which I mastered), I had an oppor-tunity to fly an airplane equipped with a genuine WORKING proportional sys-tem last year. The airplane was Doug Spreng's late Kwik-Fli (oz6526), equipped with one of the first Micro-Avionics proportional systems. After many hours of defensive flying on reeds (mostly in defense of the crashes while explaining the intricacies of reed flying to my wife), this introduction to proportional was truly thrilling. I was hooked.

Doug finally repossessed his transmiter and took advantage of the opportunity to fly his own airplane while I immediately went home and put my reed rig up for sale. While waiting for a paying customer, I haunted Doug for chances to fly his ship while beginning the difficult process of trying to rationalize to my wife why proportional was such a great thing and just how vital it was to my mental well-being to obtain one.

Finally, after much selling, swapping, and 'intelligent' discussion with the boss at home, she relented ('buy the thing and shut up!'). I immediately did buy it and now have about 10 trouble free months and 225 flights on my Micro-Avionics rig. The highest tribute that I can pay to it is to say that all that I do is to flp the switches and fly, week after week. After acclimating myself to proportional with a Stormer, a couple of Jennys (oz4842), plus some oddballs, I decided that I wanted something a little bit different. I possessed a very compact and light-weight radio system and was tired of 12 ounce fuel tanks and big radio com-partments with the radio lost in one end of them. I felt that a smaller ship could be built which would have all of the attributes of a large multi ship plus the added features of less fuel consumption, less building time (and expense), and which would fit into my car assembled so that I wouldn't have to start strapping it together at the field. I therefore de-cided that the time had arrived for me to become an airplane designer. The result is the Kwiksilver.

The actual designing of the airplane was not too difficult. I took a very short course in the fine art of aero (model) nautical engineering from an article by Chuck Cunningham in RCM. The only deviation from Chuck's teachings was to reduce the overall size of the airplane by a factor of 1 engine size. I felt that the lightweight radio gear and the powerful engines available in the .40 class permitted a reduction in size without an undue increase in wing loading.

The Kwiksilver has a 54 x 10 wing yielding 540 sq inches. At 5 lb flying weight the wing loading is about 21.3 oz/sq ft, a loading that I feel is just about ideal. A 25% stab and a 7.5% fin fill out the picture. Long moments help, too, and the fuselage shape evolved around the engine, fuel tank and radio gear.

I see no advantage to tapered wings or stabs on our models and feel that the old barn door surfaces are about the most efficient. After experimenting with zero dihedral wings on a couple of other models, I decided that they were just as easy to fly, or easier, and a heck of a lot faster to build. The sidewinder engine mounting has become a trademark of mine at the field and I feel that this type of mounting offers great advantages to the modeler. The vibration due to the engine is largely absorbed by the wing..."

Quote: "Attachment is my CAD tracing of the Kwiksilver. The original plan was not particularly clear so I wouldn't be surprised if there were discrepancies between that and my tracing, if you notice any please notify me so I can rectify them. If you choose to build using my drawing measure at least twice before cutting. Al" 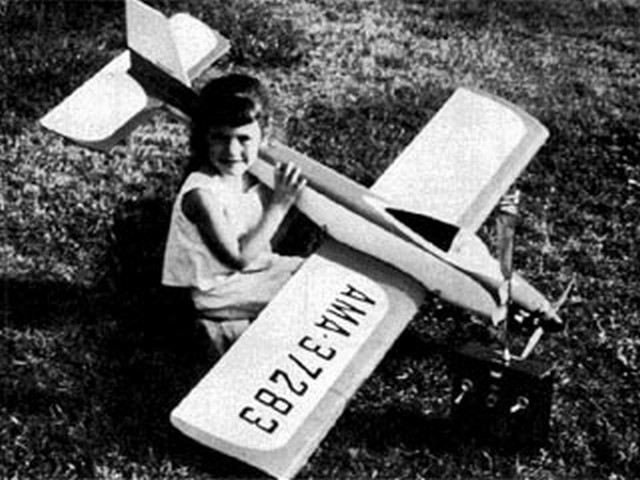