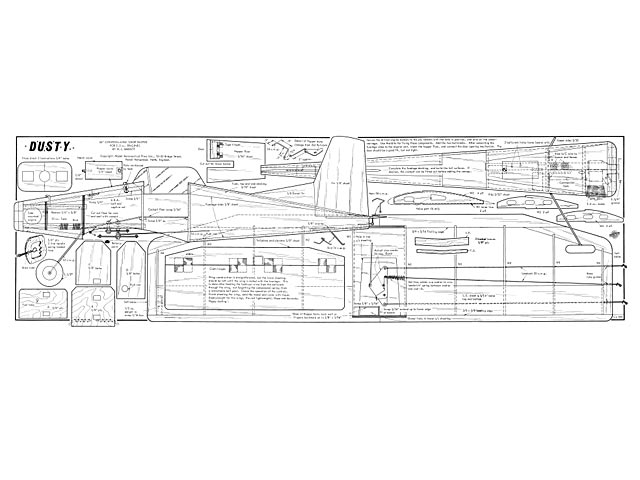 Quote: "LOOKING for an unusual subject for a control-line model? Then how about a semi-scale working crop-duster that is mildly aerobatic and yet simple enough for a beginner to fly? Dusty, by Ian Barrett.

It was the original intention to produce a true scale model, but after examining the various designs flying today, their contours and excess of 'struttery' ruled them out for a low powered model. The only way round the problem was to design a new one! The outcome was 'Dusty', a simple low-wing design of conventional layout. The finished model disguises the fact that there is a straight taper in plan from nose to tail, and the only curved sheets used in the model are those over the wing leading edge.

The dust hopper is of ample size and as it lies over the centre of gravity of the model, dumping the load in the air does not upset the trim. An engine bearer running through the compartment transmits vibration, so agitating the powder and assisting dumping of the load. The cambered wing section shortens take-off when the model is loaded, and makes possible a long glide when the engine cuts.

Construction of the model is easy, provided that it is tackled in the correct sequence. The primary unit consists of the engine bearers, ply formers, undercarriage and tank. Use strong binding thread to fasten the wire to the former and bearer, and cover with Araldite. When the engine unit is complete and dry, bolt on the two bellcranks, ensuring that they do not foul each other. The fuselage sides and the remaining formers can then be added.

Cement in place the floor for the dust hopper, taking care that the door is a good fit, without bind-ing. Couple up the linkage to the small bellcrank, and check its operation. It is most important that the door will close completely under the force of the small compression spring.

The remainder of the fuselage can now be completed, together with the tail surfaces. Before fitting the canopy, the inside of the cockpit should be painted black, and if desired, an instrument panel and pilot added, The original model had a "flying farmer" complete with bald head and ginger beard. He was made from papier mache over a "Plasticine" form, the clay being scraped out after the paper had dried. Poster paints were used for the colour, and the beard was flocked as supplied for model rail-way layouts.

Wing construction is quite straightforward. Dihed-ral is only incorporated for the sake of appearance.

When attaching the wings to the fuselage, cut away the upper centre section sheeting to clear the control system, The lower sheeting is best left until the wing is fastened to the fuselage, and the control system checked for correct working. Feed in the lead-out wires to the bellcrank, not forgetting the spring on the wire for the hatch. This can conveniently be made from a spring found in a retractable ball point pen. It is compressed between two washers, one soldered to the wire and the other cemented to the inboard wing rib. There should be sufficient initial compression to keep the hatch shut.

A special handle with a third line will have to be made - the one shown is simple to make and comfortable to use. When flying the model, do not pull too far back on the middle line, otherwise tension may be lost on the control wires!

A final word of warning. After filling the hold with powder (french chalk, flour, salt, etc) and starting the engine, do not check the third line operation until you are airborne!" 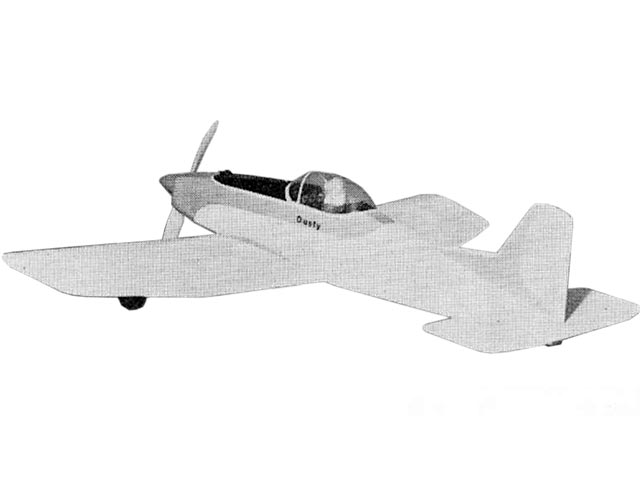 I've built this one: it's complete. It looks a bit quirky on the drawing but once built it looks surprisingly attractive.
Hans - 03/08/2017
Add a comment