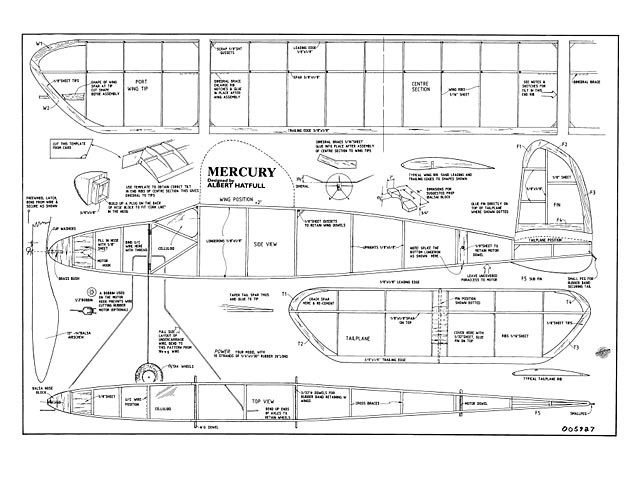 Well, maybe not exactly lost, but it did lapse into obscurity for over 40 years. Albert designed the Mercury in late 1947, sticking to his well-established philosophy of: Simple, Strong; and Stable. The relevant page in his scrapbooks is dated January 1948 and shows the original kit advertisement plus photos of Albert's prototype in both framework and covered forms. This date precedes his Keil Kraft Senator (oz472) by a year.

Unfortunately it was just the wrong time to launch a kit for a free-flight rubber model. With the easy availability of the new diesel engines, the emphasis was on free flight power and control line models. Consequently, sales of the unappreciated Mercury never really took off and it faded quietly out of the picture.

Then, at roughly the same time in the mid '90s, the plan was included in the SAM Year Book No.7 and I visited Albert at his East Anglia home and saw the photos in his scrap books. Smitten, I cast around for a plan, without success (even Albert himself didn't have one!) so started scaling up from YB.7. Then, out of the blue, an original kit plan arrived through the good graces of Ray Jenyon and Terry Rose and I was away. Several fellow club members requested plans and copies were sent to Adrian Bryant and Barry Mallet in Australia.

Being straightforward, the Mercury is much easier and quicker to build than most smaller models, due to the larger wood sections and lack of 'fiddle'. Also it is simplicity itself to trim and is a truly tremendous flyer. Mine went away, after four good years' flying, at Middle Wallop in 1999. In Oz Barry Mallet has lost one, while Adrian Bryant built one which flew away on its second flight. He liked it so much that he built another and this, too, disappeared in short order. In addition, famous Australian engine man Gordon Burford has built a 54 in electric powered R/C version and is delighted with it.

So get building now and finish it in time for the SAM 1066 Euro Champs at Middle Wallop in August. But do fit a dethermaliser if possible. Here are Albert's original construction notes, updated where necessary.

Construction: Fuselage. Cover the plan with plastic film to prevent parts adhering to it. Pin top and bottom longerons to the plan (pin either side of wood, not through) cut and cement joints adjacent to cabin position. Cut the uprights to exact length, fit between top and bottom longerons and cement in place. When all these are set, cut a piece of 1/8 sheet to fill in nose where shown and cement. Also cut the motor dowel retaining member from 1/8 sheet, bore a 3/16 diameter hole for motor dowel and glue the sheet flush between the longerons. Add small gusset pieces. Leave this side to dry thoroughly, then build a second side using the same pins to hold the longerons. When both sides are dry remove all pins.

Clip the rear end temporarily together using a Bulldog type clip, ensuring that both sides line up accurately. Cut cross braces to size shown in plan top view - cut in pairs for accuracy and cement in place, also in pairs, working from the clipped rear end towards the nose. When all cross braces are set remove clip and glue rear ends permanently together... " 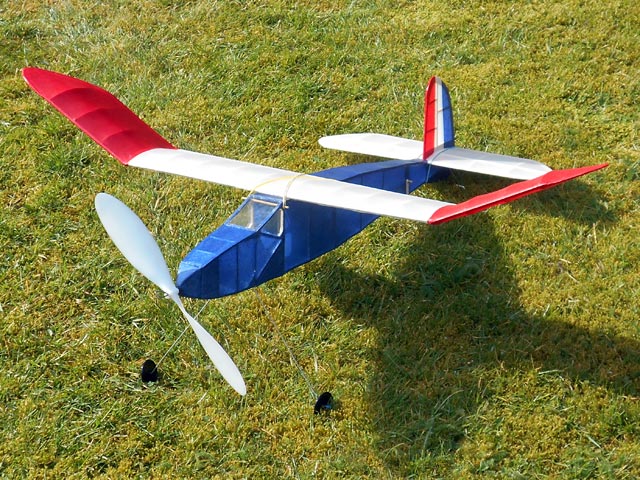