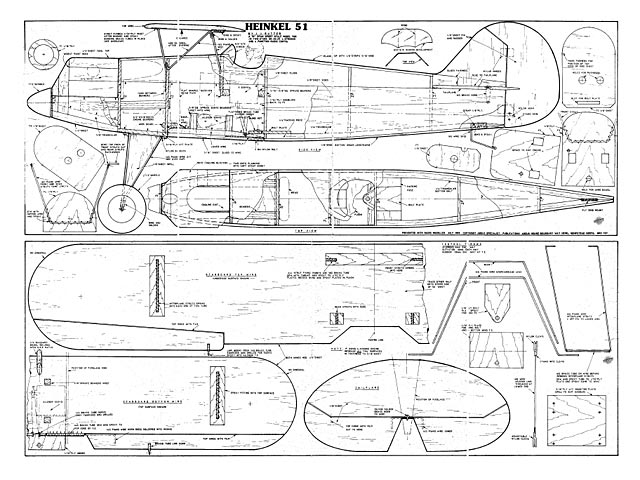 Quote: "Despite simple construction, Rutter's He51 makes a convincing finished model when fully rigged. Power is the prototype is an HP 21 four-stroke but really any motor of similar size, two or four-stroke, will do.

Some aircraft seem as though they were designed with modelling in mind, their lines are simple but attractive, their moments give the proper CG easily and their colour schemes are bright. The He-51 is one of those aircraft, yet despite this there are relatively few models of it and it remains 'different'. During the early part of last year I was looking for a model to put a four-stroke motor into; it virtually had to be a biplane and one that would fly on very little power as the motor hadn't got a lot! The Hawker Fury that I built a couple of years ago came to mind - but then I spotted a plastic kit of the He 51 in a paper shop and was hooked!

The Fury had performed well enough on an OS 10 FSR with all sheet wings so I reasoned that even a four-stroke should be able to pull a similar model into the air. As it turned out the Heinkel performed in a very scale-like fashion and was even better than the Fury. It sounded nice too!

There are few deviations from scale in the outline of the model (well, none that are deliberate but I drew it up from the kit!) but I kept things simple and left off things like gun troughs and exhaust pipes which I am sure could be added easily enough by a more fastidious scale modeller than I. The sheet wings are obviously less efficient than built-up wings but are not a lot thinner than scale and are very easy to build and repair.

Getting started. Construction started with the flying surfaces; these were simply drawn onto sheet that had been made up to the required width and cut out. The aerofoil section was planed and sanded and the control surfaces cut away and chamfered for centre hinging with mylar strip. This should take about an hour from start to finish which has got to be the easiest way to get a pair of wings, a tail and fin! For scale, the top wing should have dihedral but I kept it straight for ease and strength - it's hardly noticeable. As I used a heavy motor I made the tail from fairly heavy 3/16in sheet but, with a lighter two-stroke motor on the front, 1/8 in should be adequate and would avoid the need for a large amount of lead in the nose.

At this point I covered the tail surfaces with silver film (I think the true colour should be light grey but Solarfilm don't have any and silver looks OK) and installed the elevator horn and hinges then put them aside until the fuselage was built up. The wings can't be covered until the fuselage is finished in order to get the struttery in the right place.

Having disposed of the wings, etc, in short order the fuselage has to be next on the list and this follows more normal practice. I personally like to cut a kit of bits before I glue anything together and that seems as good a way to start as any. Bend the wire struts from 16G piano wire (this is quite thick enough without being hard to bend) and bind them to formers 3 and 4. I then glued them in place with 24 hour epoxy, heated the lot up with a heat gun which makes it flow lovely and sets it in half an hour or less! The motor was then fitted into the bearers which in turn were fitted into formers 2 and 3. Check the alignment very carefully against the drawing and repeat the epoxy trick..."

hej Mary and Steve, Plan and article from Radio Modeller July 1989 .15 engine 36in span.I have not built it myself. regards, karsten 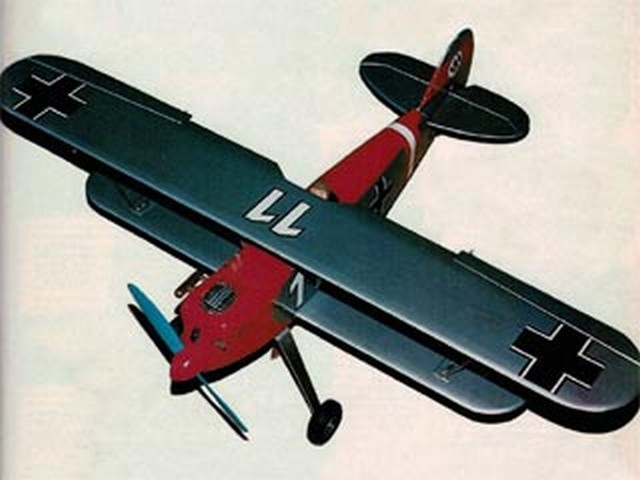