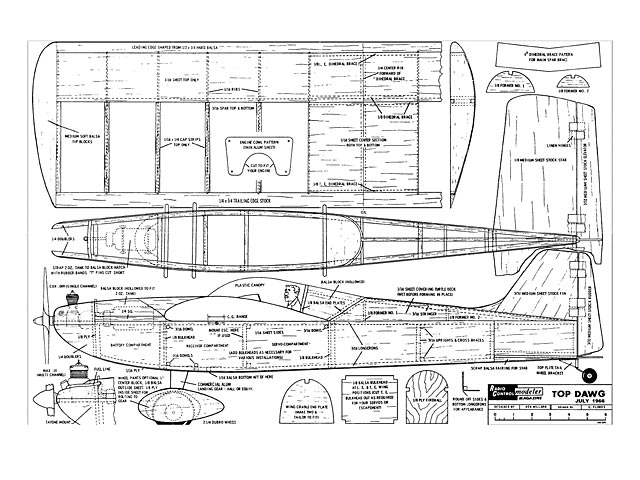 The Top Dawg was designed in response to numerous requests from you Sunday fliers for a good, small sport job that would be suitable for several types of installations for radio gear - escapements, servos, reeds, galloping ghost, and even the more expensive proportional gear, such as the Orbit 3+1, Digitrio, PCS, Micro-Avionics, etc.

It has been an interesting challenge to meet such a broad requirement. From my own standpoint, I added another specification - that it should look hot like a racer, yet be comparatively easy to handle so the sport fliers could enjoy it. You shouldn't have to finish every flight with a severe case of nerves! Probably some of you will anyway - at least until you get used to it, because you'll want the hot version with an .09 or .10. even .15 power. But that's OK too, as long as that's the way you want it!

Some interesting factors were involved in this design. The compartment for the radio gear needed to be large enough for three servos, receiver, and battery pack for proportional gear. Yet the center of gravity location had to be non-critical because of all the possible variations in equipment.

I figured that the version with the proportional gear would probably be the hottest to handle because of the heavier wing loading and higher power required. So that was the first version to be built. A Max .10 was selected to power it. and Art Strahm loaned me his Orbit 3+1 (what sublime faith!) for control.

Now, I don't have a lot of stick time on full house proportional gear, but I decided to make the first test flight anyway. I had done some rudder only proportional flying, and figured I'd just use rudder until I got the feel of it. That first flight was a real thrill!

If you think you can handle it, put in an .09 or a Max .10 - and be ready! I don't recommend it for beginners, even though the .049 version is very good to fly. My suggestion would be to first fry your Top Dawg with .049 power. Then install an .09 or a .10 after you've learned the reaction speed of the model. Three versions were built during the design stage. One had a 15% airfoil with 4 degrees dihedral, and this version is good for full proportional control, since you'll be controlling it all the time. The second version was similar. The difference being that it had 6 degrees dihedral. This is the best all around version, since it will free flight when properly trimmed, and return to level flight from a steep turn all by itself. This is good for single channel flying. The third version had a 10% airfoil and is too hot except for very experienced fliers.

Based on the flight tests, the version with the 15% thick airfoil and 6 degree dihedral was selected for publication. I think you'll like it. Here are a few building hints..."

Update 11/07/2013: Added a full-sized version of the plan, and clearer article pages, thanks to rchopper56.

Article pages, text and pics, thanks to rchopper56. 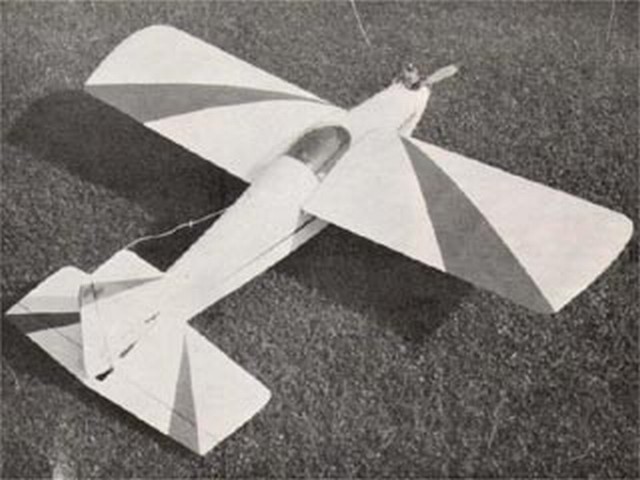