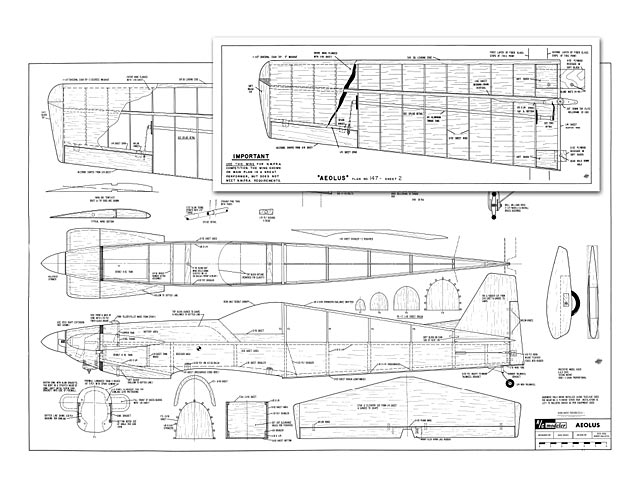 Quote:- "As swift as the lebgendary God of the Winds for which it was named, the Aeolus is a truly remarkable plyon racer - and a potential champion for the 1965 Goodyear Event. RCM selects Dick Riggs' low-winger as number one among the current NMPRA designs.

The first of the new Goodyear Event ships that I had an opportunity to fly was Jerry Nelson's little Cosmic Wind. This plane actually surprised me by its capabilities, flying much better than one would expect. Subsequently, I watched Jerry fly his Bonzo (oz10170) many times - watching being just as good as flying, in many cases, when trying to evaluate design and performance characteristics. Following these flying sessions in Northern California, I attempted to put down on paper the characteristics I had seen that were desirable for incorparation into a Goodyear Event contender.

Both the Bonzo and Cosmic Wind (Little Toni) were somewhat sensitive in control response - not overly so, but probably a bit more than one would desire. There are several ways to overcome this factor. For instance, the Bonzo has an extremely high roll rate due to the very low aspect ratio. So when designing the Aeolus, a slightly higher aspect ratio was used. The Cosmic Wind has a fair to middling AR, but still suffered from sensitivity due to the coupled ailerons and rudder. When you go the coupled aileron and rudder route, you must keep the control throw way down, remembering that these pylon ships move along at quite a pace and the controls can be quite sensitive. Elevator response in all of these designs seemed to be perfectly adequate as long as the Center or Gravity is kept well forward. This is due, in part, to the flat bottom wing, and only becomes particularly critical when you approach a stall point.

I do not feel that a symmetrical, or semi-symmetrieal airfoil would have any particular advantage for these Goodyear racers, except that you could probably get away with an airplane that is a little less longitudinally stable. In other words, it wouldn't he quite as critical in the CG location. The tapered planform of the Aeolus was used not only for the additional structural strength it provides. but to aid in increasing the aspect ratio. This increased AR slows down the roll rate, but at the same time, increases the rolling torque effect of the ailerons. This, then, gives us the desired control response with less variation from high to low speed. In other words, in the glide approach the aileron is still relatively effective due to their excellent generation of torque. Washout was incorporated in the wing to overcome one disadvantage of tapered planforms - they are notoriously laterally unstable as the stall point approaches.

The first test flights on the Aeolus indicated that the CG must be much further forward than one normally uses on a symmetrical, or semi-symmetrical, wing. As it was originally located - at 35% of the chord - it was practically impossible to find the trim condition. In other words, it was either climbing or diving all the time. After the CG was moved forward to approximately 20%, we found a condition that is probably superior to the symmetrical wing. That is, when you set your elevator trim for a normal glide approach, and as the speed increases, the center of pressure travel moves back and accentuates the nose down condition. At the same time, however, the lift generated through the increased speed cancels this factor out, so you end up without having to worry about your elevator trim setting. This same condition was noted in both the Bonze and Little Toni, so perhaps the flat bottomed airfoil has some advantage for our use in this pylon event.

As I mentioned earlier, both the Bonze and Cosmic Wind utilized the coupled rudder and aileron configuration, whish is more than adequate, but greatly increases the control sensitivity. In order to overcome this one undesirable feature, control throw must be kept to a minimum. One distinct advantage to the coupled aileron and rudder set-up is that at low speed on the landing approach, the rudder remains quite effective..."

Note this plan is a composite of the original as printed May 1965 along with a later amended wing layout drawing printed Aug 1965.

Update 15/07/2018: Replaced this plan with a clearer copy, thanks to Balsaworkbench. This is scanned from fullsize and much clearer. Also now includes both wing layout drawings, 2nd sheet showing the amended (longer) wing, which makes the design NMPRA legal. 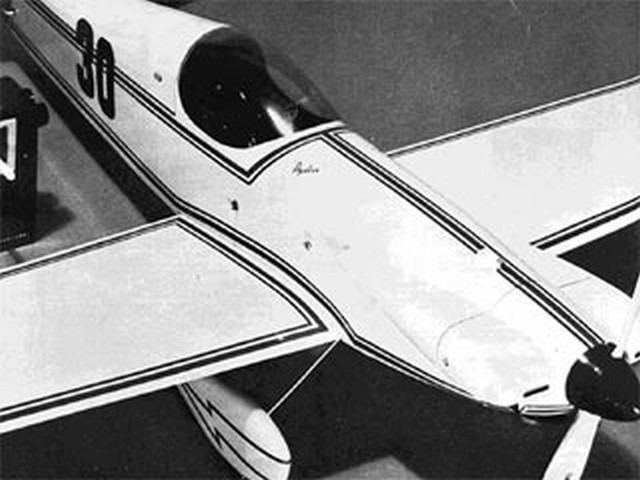