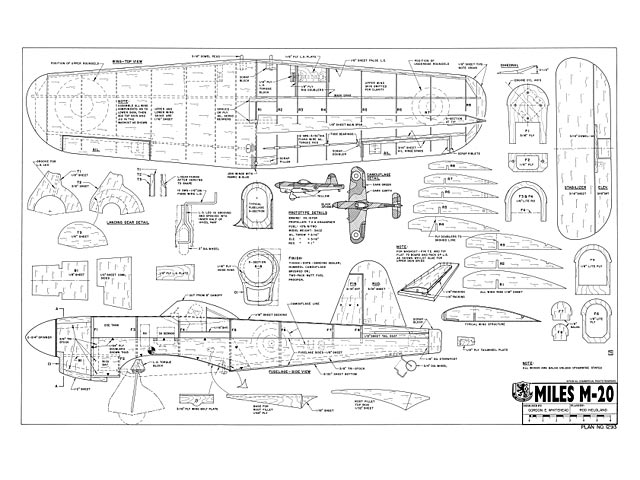 Quote: "Looking for a change of pace, build this exquisite 34in span mini-warbird for .10 to .15 power, and a 4 channel system. Miles M.20, by Gordon Whitehead.

Whenever this miniature replica appears on the club field, it always generates huge interest vastly out of proportion to its size, and it is certainly one of the most stimulating models I have ever made. The usual guess is that it is a Hawker Typhoon, or probably would be if it wasn't for that fixed gear! The better informed onlooker will know that it is a Miles design - but may have some difficulty in choosing the right one.

It's a pity that the machine isn't more instantly recognizable (maybe it will be from now on!) as the story behind its creation is a very satisfying demonstration of what industry can do when the country is up against a major crisis. When the Battle of Britain was at its peak in August 1940, FG Miles persuaded the Ministry of Aircraft Production to give him contract F19/40 to develop a quick-build fighter in case the reserves of Spitfires and Hurricanes became exhausted. The prototype was designed and built in the record time of nine weeks; the all-wooden airframe used standard Miles Master parts where possible, hydraulics were eliminated, and a fixed undercarriage was fitted. In case you feel that you have seen the cowling arrangement before, well that came off a Lancaster, along with the Rolls Royce Merlin XX.

Some accounts sugges that the M-20 carried twelve guns, but photographs show only eight gun ports, In terms of performance, the M-20 had a comparable climb and top speed to the Spitfire and Hurricane, had twice the range, and twice the amount of ammunition, but was less maneuverable.

By the time the first prototype had flown, the Battle of Britain had been won, and production was not required. However, during 1941, the Navy was looking for a fleet fighter, so ordered a navalized prototype fitted with catapult spools, arrestor gear, and a shorter undercarriage. Tests proved that the deck landing characteristics were not up to scratch, and the M-20 finally passed into history.

Whatever the shortcomings of the real machine, this replica handles beautifully. and makes an ideal small sport scale job, so let's build.

Construction. Empennage: First, cut out the tail surfaces, sand them to section, and separate and dry-hinge the control surfaces. These will be needed before the fuselage is finished.

Wings: Sorry about this, but you need to make the wings next, as they too will be needed before the fuselage is finished. Prepare the top and bottom skins by edge joining the 1/16 sheet, cutting them to size (the upper skins are 1/2 in wider in chord to allow for the upper surface curvature), and sanding them smooth. Cut out the ribs, spars, leading edge pieces, the tip outlines, and glue the ply rib doublers to R3/R4 respectively. Using a felt-tip pen, mark the rib and spar positions on the internal surfaces of the lower wing skins. CA the spars in position, followed by the ribs. Next, add the false leading edges, chamfering the lower edge as required. Glue the ply landing gear mount plate to R3 and R4 and then roll the lower sheet up to the leading edge and CA in place. Add the aileron hinge spars, the built-up landing gear torque blocks, wing peg blocks, and the aileron torque rods. The torque rod bearings that l used are lengths of drinking straw, which one finds on those small rectangular individual drink boxes seen in supermarkets, but of course you can use commercial units if you prefer. On the external surface of each lower skin, mark the positions of the aileron gaps using pin holes joined with pencil lines.

Now glue the wings together at the correct dihedral angle, which is achieved by pinning one panel flat on the board and jigging the opposite tip 3-1/2 in up off the board. Next, glue the servo mounting rails in place, cutting away the center rib as required. Screw the aileron servo in place, and using the fact that the aileron torque rods are now at their neutral position, make up the aileron pushrods.

The next step is to add the top skins, along with the correct washout. This is shown in the diagram on the plan. Use an aliphatic resin glue here, and do each panel singly, allowing each to dry thoroughly overnight. Add the leading edge and tips, then sand the wing smooth, You can now wrap the wing center joint with a 1 in wide strip of glass cloth epoxied in place. Finally, separate and dry-hinge the ailerons.

When your wings are finished, you'll note that they have far more dihedral than is visible in the photos of my prototype. The photos were shot before I cut the wing in half at the root and re-joined it with extra dihedral to improve control harmony. I recommend staying with this flight-proven modification to the original design.

Fuselage: First of all, glue the 1/64 ply doublers to the 1/8 sheet sides. followed by the 3/8 balsa triangular corner stock. The battery bay roof must be glued to F1 before the sides are added along with F2, F3, and F4. The remaining formers, stern block fairing and wing bolt plate are added next, after which the fuselage servo, rx and battery installations can be decided. Pin the tail surfaces in place and make up the respective rudder and elevator pushrods. Pin the wing in place and make sure that the servos do not snag anything, and that the receiver, battery, and tank will fit. At this stage you can drill the leading edge for the dowels using the holes in F2 as a guide, then drill and tap the wing bolt plate. You can now finish the fuselage off by adding engine mount, tank, and plumbing, then the cowling and nose ring, tail wheel leg. Next, install top and bottom sheeting, followed by the wing root fillets.

Landing Gear: The landing gear covers (pants) are a must to preserve the character of this machine, but don't worry, they are easy to make. Contrary to frequent comments in the pages of many modeling magazines, wheel pants are no worse for nose-overs in grass than bare wheels - provided you inspect the interior occasionally to clear out any debris. Each wheel fairing is made from six pieces of sheet balsa. The outer and inner halves are made separately, and the inner half grooved for the binding gear leg. The halves are then tack-glued together for shaping. Next, secure each landing gear leg to the wing with saddle clamps, noting the forward rake. Secure the wheels in place with soldered washers, and then test-fit the fairings over the wheels and legs, Next, roughen up the wire legs using coarse sandpaper, and epoxy the wheel fairings in place, ensuring that they are true fore-and-aft..." 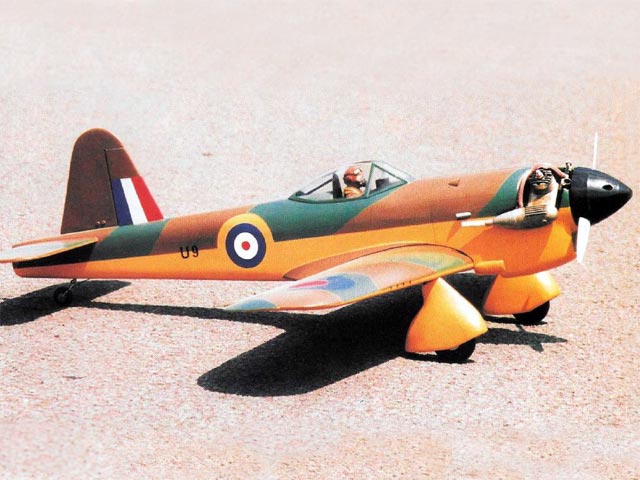