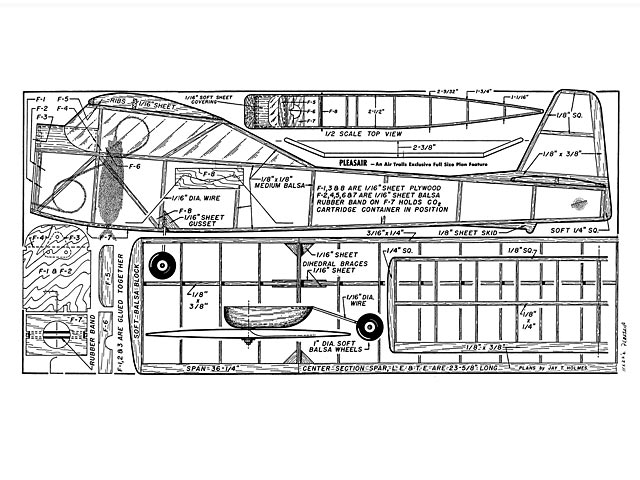 Quote: "In designing the Pleasair, our basic idea was to develop a sport model for pleasure flying that would appeal to the beginner, rather than a high-performance contest job, for the expert. Our aim was to produce a model that had good performance yet be of rugged construction, simple to build, light in weight, stable in flight, and realistic in appearance.

Special care was taken in designing the model to make it easy for the beginner to construct. No sharp curves, tedious or fragile construction is used. As a result, the Pleasair is rather boxy in outline but still manages ,to look like a real airplane, m this case a four place sportplane.

As C02 models go, the Pleasair is a little on the large side, but due to its simple design, it stays within the weight limit recommended for CO2 engines provided care is taken in the selection of material. If the Pleasair seems to have gas model lines, it’s because it was reduced and modified from a gas model design. If a removable wing and tail is preferred, install 1/16in dia dowels to hold wing and tail in place.

Construction is further simplified by the full size plans which should be studied carefully, especially the top fuselage view, to fix in mind the position of formers F5, F6, and F7. Note that after the left half of the wing has been completed, the right half can be made over the same plan by simply reversing the leading and trailing edge position. By placing the center rib back over the position of the center rib of the plan, the remaining ribs will be in their correct position... " 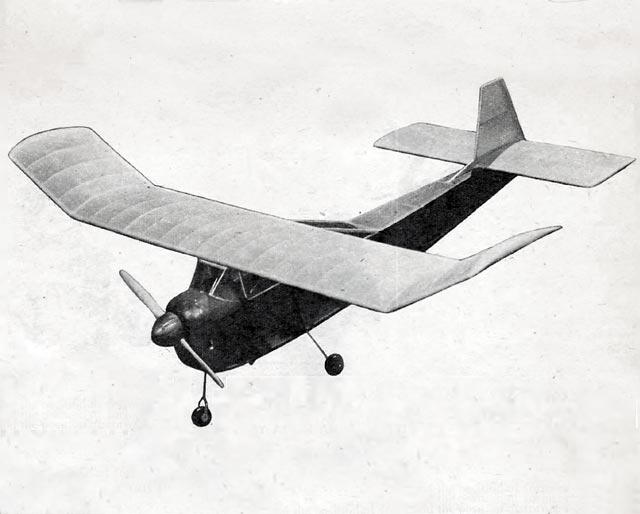