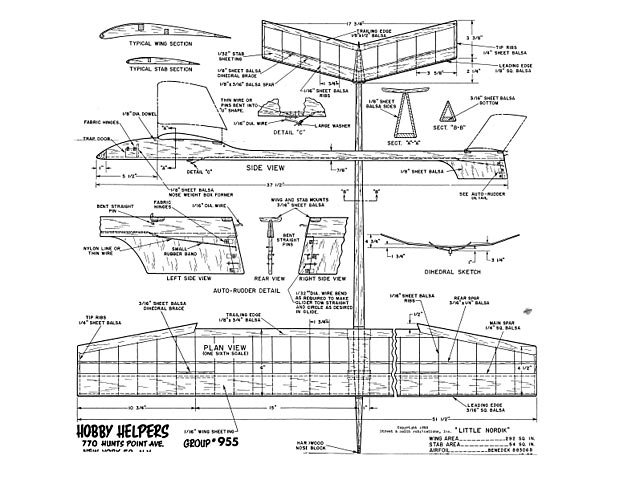 Little Nordik was designed to eliminate fancy formers, bulkheads, and string-ers, yet retain appearance and performance. I have long been an advocate of simplicity of construction mainly because I'm too lazy to build the hard way.

The basic design follows closely that of big brother Nordik which I flew in the 1953 International Glider Championships held in Yugoslavia. The long tail moment arm permits use of an 18% stabilizer. This utilizes the total area of 350 sq in to best advantage by putting most of it in wing area which is what determines to a great extent the glide. First contest Little Nordik entered was the Nationals at Philadelphia where it won the open division with a new na-tional record of 12:13.

The automatic rudder makes possible a straight overhead tow, which contributes considerably to altitude over most present gliders flown in this country. Few American gliders will attain full height on the tow line. This auto-rudder is a variation of European methods.

The wing airfoil section, the Benedek B8306B, was derived from work done by Dr Georges Benedek of Hungary. This section is found on many Continental designs, and has an outstanding lift/drag coefficient.

The construction of the wing and stab is handled in conventional manner like that of most planes you have built, so I will not go into detail. The fuselage, though a bit different, is a pleasure to build. Cut the two sides from one-eighth medium sheet balsa to the shape shown. The bottom is cut from three-sixteenths medium sheet. Bevel the edges of the bottom piece as shown on view A-A, and pin down on a flat board. Bevel the sides at their top as shown on view A-A. Glue the two sides to the bottom and let dry. Before pulling the top of the fuse-lage together, insert the nose weight stop about 3-1/2 in back of the nose and glue. Pull the two fuselage sides together and glue beveled edges. When dry, glue on noseblock and carve to shape. Sand the whole fuselage to a smooth surface, and apply Silkspan over the whole structure. This prevents balsa from splitting under hard landings. Cut notches in fuselage and add the wing and stabilizer mounts. Add dowels for wing attachment, hooks for stab, and glue on sub-rudder. Cover the wing and stab with rubber-powered Silkspan and apply four coats thin dope with a bit of castor oil added.

The auto-rudder is easily manipulated. Slip the tow cord ring over the hook, and slide the spark plug washer with line attached to rudder over end of hook as shown in Detail C. Circling in glide is obtained by bending wire attached to fin to allow rudder positioning. With a little practice, you achieve a straight tow and smooth right circle in the glide.

Be sure to utilize the dethermalizer, because if you fail to light the fuse you may be in for quite a hike.

Remember, it has been said: The only difference between an expert and an ama-teur is plenty of sandpaper and a strong thermal. This may not have been that famous old Chinese philosopher and box-kite flyer, Confucius, but it was a mighty wise man nevertheless." 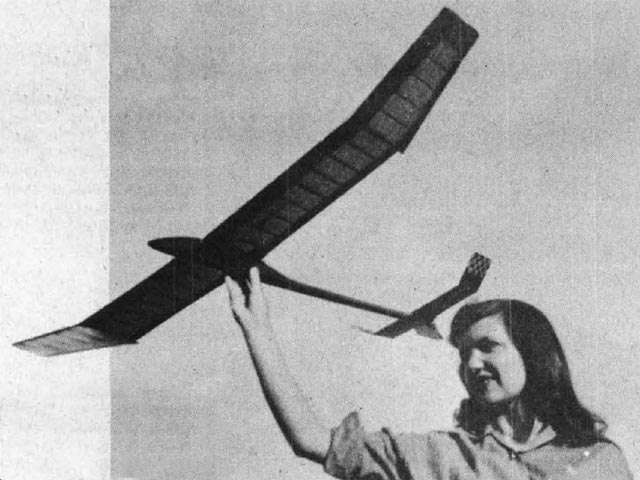