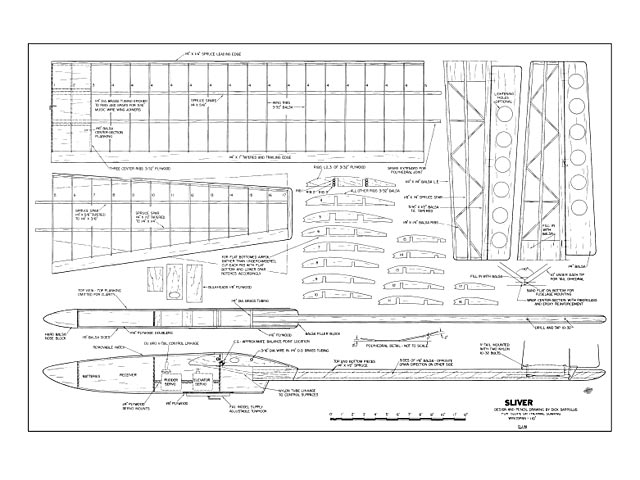 Quote: "This one is not so exotic that you can't build it. This thin-lined bird will soar on the slightest lift. Sliver, by Dick Sarpolus.

This sailplane offers good perfromance, modern styling and easy construction, based on some well proven design features. I hadn't built a sailplane in quite a while and had some new techniques I wanted to try as well as to go back to a proven wing with a long, long history. The airfoil - and the wing - go back to Frank Zaic's Thermic 100 (oz1573) of the 1940s. The airfoil is the well known NACA 6409, with or without the flat bottom modification. This basic wing also offers several choices in the airfoilds and sizes it can easily be built to.

I first encountered this wing as one of my early sailplane ventures with friend Joe Roslyn; the Thermic 100 wing was combined with a Taurus tail assembly for the Thermus, a successful sailplane in 1969 which is still winning trophies today. Frank Zaic later modified the wing, going to a straight tapered tip panel in place of the original 'Wolf' outline. It was sold commercially by Frank and also incorporated into several successful kit sail planes. He later modified the undercambered 6409 airfoil into a flat bottomed section and again offered it commercially in several sizes, from 100 up to 130 inch.

My intent to build this wing with the undercambered airfoil was to have a model which would be well suited to calm air or light breeze conditions. The flat bottomed wing version could be used for windier weather, being faster and better penetrating. The wing's multiple spar and closely spaced rib layout offers easy construction - no planking or capstrips required - and still performs well. The chosen layout uses 34 in span constant chord center panels and 21 in span tapered tip panels for a 110 in span, 906 square inch area. The two main panels con-struction easily mates with two wire joiners through the fuselage for a clean assembly.

This plane is my first with a vee tail, and selection of this feature led to the slender fuselage design. The vee tail is appealing for several reasons - less construction time, less drag, novel appearance, less vulnerable to crash damage. The control linkage chosen was DuBro's new setup, with the mixer link-age mounted on one servo and linked to a second servo, directly behind the first one. With the two servos now mounted in line, it was obvious that a very slender fuselage could be built, using a flat pack battery and a flat receiver. The fuselage was laid out to be barely wide enough to accept the Dubro linkage, the servos, battery and receiver easily fit..." 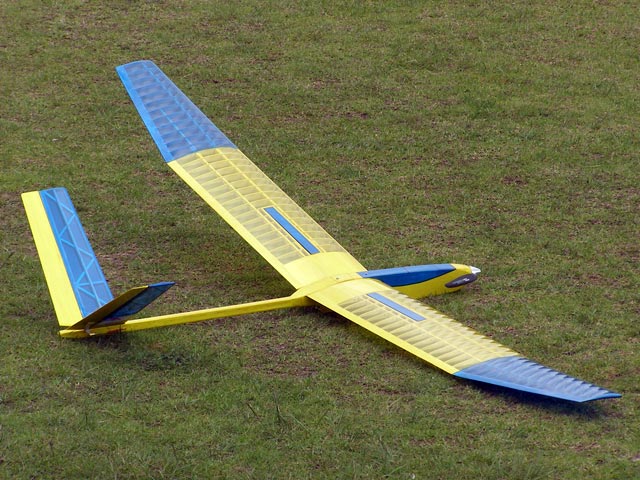