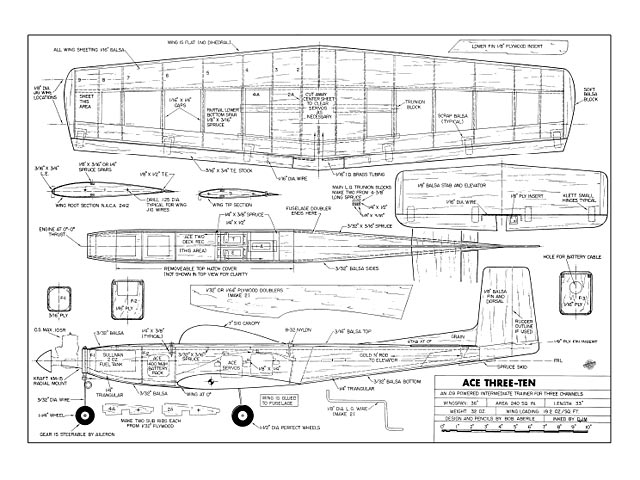 Quote: "One of the most neglected engine sizes (for R/C use) over the years has been the .09 cu in displacement (small class A). Engines of this displacement have always been available. In the past ten year period OS, Enya and Cox, to name a few, have marketed engines in this category. The OS and Enya both being available with reliable R/C type throttles and mufflers. Unfortunately, neither magazine designs nor model aircraft kits have ever explored the full potential of these little engines. Most .09 powered R/C models today are simply high wing, sport or trainer types, but never a high performance type capable of at least intermediate pattern maneuvers.

I had just recently completed a new Ace three channel Digital Commander R/C System kit (see Flying Models, September 1977) and was looking for a suitable subject to flight test the equipment in. At the same time i had just received a brand new OS MAX .10SR (Schnuerle ported) engine. With the availability of both a lightweight radio and an engine I was able to come up with a new .10 powered design that is certainly not a basic trainer.

Design Details: First of all I chose aileron control because of the low wing (no dihedral) configuration. Since I wanted to initially limit myself to the three available channels in the Ace system, I settled on aileron, elevator and throttle control. Using a trike gear arrangement I was able to hook up a steerable nose gear working off the aileron servo. The rudder was fixed in position (not moveable).

I always start my designs by establishing a total estimated weight using known factors such as the weight of the engine, R/C equipment, wheels, landing gear and a guess on the structural weight. In this instance I felt that 30 ounces was a good target weight. I wanted the wing loading light, around 18 oz /sq ft, so that an average flyer could land the model comfortably. From these first two assumptions I arrived at a wing area of 240 sq in. Last consideration was a wingspan not to exceed 36 in so that conventional size balsa lengths could be purchased with a minimum of waste.

To keep the model real simple I permanently glued the wing to the fuselage, which eliminates the need for the hold-down bolts. Radio access is through a removeable top hatch cover which I have used successfully on many of my recent designs.

Plenty of room is provided for the new Ace radio system. Likewise there is plenty of room for the addition of a fourth servo to control the rudder should you want to add this at a later time. Remember, the Ace three channel system can be easily expanded to more channels. The resulting design which I call the Ace Three-Ten (Ace three channel R/C and OS Max .10 engine) certainly fills the gap between the tiny and sometimes tempermental 1/2As and the gas guzzling, high performance .40 to .60 powered models. The O.S. Max .10SR requires only a 2 ounce fuel tank which still provides a respectable 6 minutes of flying time. That's a lot of flying per expensive gallon of fuel. And that fuel won't be getting any cheaper in the future. Maybe we modelers ought to seek a tax rebate or incentive for flying smaller R/C models (Ha!).

Construction: Begin, as always, with the wing. Prepare two 1/16 or 1/32 plywood wing rib templates, one for the root (center) rib and the other for the tip rib. The airfoil section selected for this model is the NACA 24012. Drill two .125 diameter holes into each of the plywood rib templates as shown on the plans. These holes will provide the basis for the wing jig system. Place a stack of 1/16 balsa blanks (a total of 7, One for each rib) between the two template ribs. Drill through the stack and then insert 4-40 hardware to hold it together..." 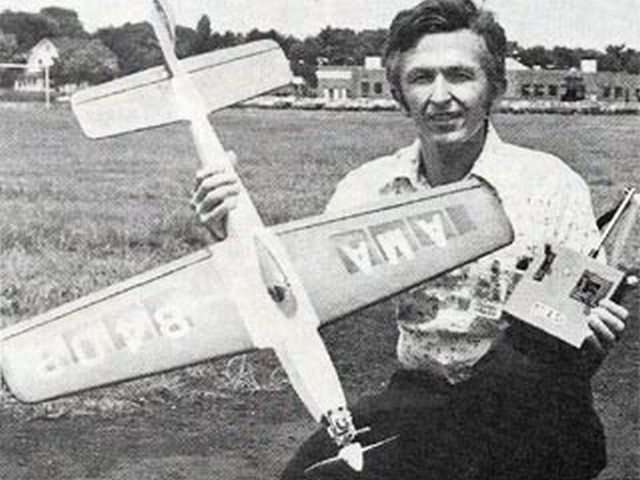