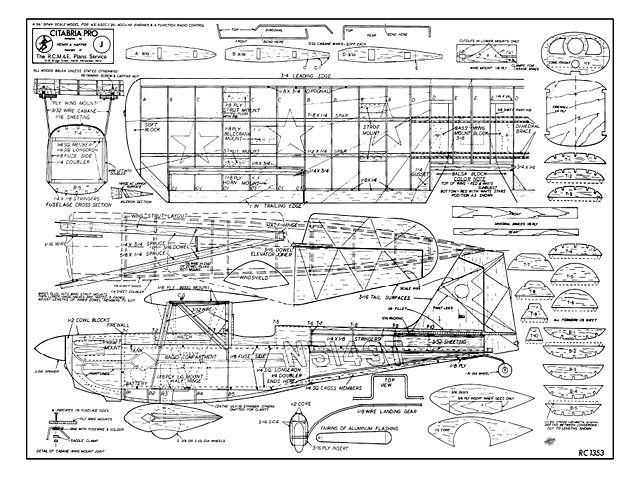 Quote: "56 in span Sport/Scale contest winning design from the USA.

Ten years ago when I received my November 1968 issue of Air Progress in the mail, 1 went through my usual routine of flipping through the pages to see if there was anything of an out-standing nature to be found. When I came to the centre of the publication the centre-spread immediately caught my eye. It was one of the most beautiful aircraft that I had ever seen. A two page colour shot of a high parasol winged sports plane in a gorgeous colour scheme. That subject went right to the top of my 'models to build' list.

The aircraft, built by the Champion Aircraft Company, was designated Model 8KCAB. It was intended for production as a competition acrobatic special for advanced sportsmen. The aircraft had been hand-built using the basic bottom truss structure and tail assembly of the production Akro Citabria. The wing was an entirely new structure using the NACA 1412 airfoil. The nose was of fibreglass and power was the Lycoming 10-360 Special boosted to 200 hp output. The aircraft has a 'G' limit of 6-positive and 5-negative.

Champion sold out to Bellanca shortly after building the Pro and a decision was made not to produce the aircraft. Bellanca donated the original to the EAA.

Not knowing the above details at the time, I searched in vain for additional information on the Pro. Finally, I wrote to Champion Aircraft and got no answer. Several months later, I did get a reply from Bellanca informing me of the situation. There had been a fire in the Champion plant and the material on the Pro had been destroyed so they could not help me.

This did not discourage me, however, and I decided to modify a Sig Citabria kit into a Pro. I bought the kit but never got to it. I had been flying a model of the Citabria for several years. I had designed it from factory three-views sent to me by Champion when the Citabria first appeared. The model was a real fun airplane and quite attractive. It started out as an escapement single channel ship with a Fox .15 for power - that tells you how long ago it was built. Then I flew it with three different radios on three channels. It was a real fun airplane and very easy to fly. I let anyone fly it. My three children all flew it and nearly every flier in South Jersey has had a go with it. After eight or nine years, it was getting pretty beat up around the nose area and had been repaired several times. Finally, I had an elevator servo hang up and did it in, knocking the nose off for the third or fourth time. I decided it was time to build a new fuselage, but would make it into a Pro.

I scaled the fuselage up to fit my 56 in wing and got it built. When it was ready, it was too beautiful to put that old wing on it, so I built a new wing with the proper cutouts and with ailerons. My original Citabria had no ailerons. I had planned to use my three channel Kraft in the model and decided to try coupled rudder and ailerons. I had an old Enya .29 sitting idle so I set the front end up for it. As soon as the model was finished, I took it out to the flying field and took it aloft. It was great. The prettiest thing you had ever seen in the sky. Low fly-bys were fantastic as you can slow it down to next to nothing. It does nice loops and snap rolls and spins like crazy. I doubt if there is an easier-to-fly scale model in existance. Unlike most scale models, this one would make a good trainer. Shortly after the test flights, I took it to Toledo and entered it in the non-Military Sport Scale Event and came home with the fifth place award and the model wasn't finished yet. I flew it in its first contest and it was judged second to Bob Karllson's Ryan PT-22 by only a couple of points.

By the second contest, I had finally finished the detailing on it and it has come out on top in static judging in every contest since that first one. I have also flown it in five AMA events and it has won two firsts, one second, one fourth and one fifth. It has failed to win a trophy in only one contest in two seasons of flying, and that was because it was so windy that with only the .29 powering it, I ran out of fuel before the flight was completed on both my flights and received a zero for my landing as I didn't make it back to the landing area. I ended up in sixth place only eight points behind first. Not bad for a fun ship, winning II trophies in 12 contests over a two year span.

Now that you have the model's background and competitive record, let's get to the building. The model is quite simple to build so here again we do not have to restrict it to only the experienced modellers.

Fuselage: The basic sides are cut from 1/8 balsa. 1/4 square is glued to the inside, top and bottom of each side. Make sure you make one right and one left side. Now form the cabane strut wires and epoxy them in position on the outside of each side sheet. Cut out a pair of 1/4 fuselage doublers which extend from the firewall to the location of T-6. Align the doubler over the side and press into position to mark the underside where the cabane wires are positioned. Now turn them over and with your model knife cut out a slot for the wires to fit into. The doublers can be added to the sides when this is done.

When dry, the sides may be fitted to the fire-wall which has been cut from 1/4 ply. All top and bottom formers are cut from 1/8 balsa and a 1/4 square cross member is cut for each former. The length of these cross members is 3/4 in shorter than the former. Install the cross members and formers back to T-4 and B-5. Let this dry and then pull tail together and glue...
Citabria Pro, RCM&E, November 1978. 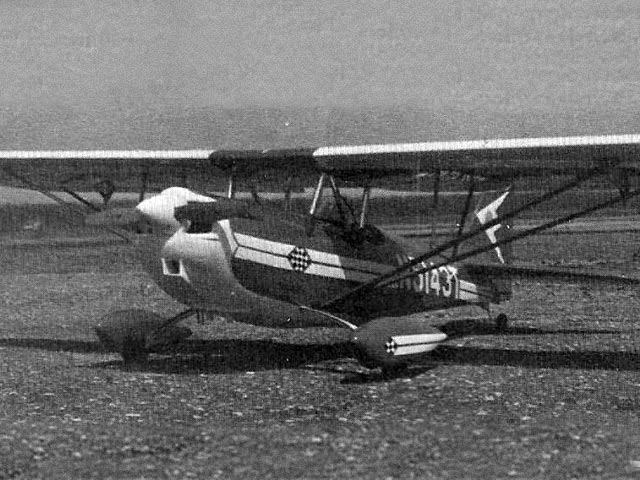