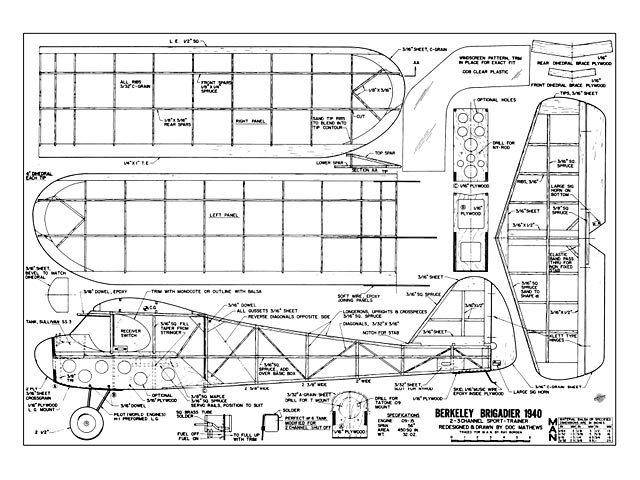 This is a 'two-way' model; a three-channel sport job, or a two-channel thermal-seeker. The Brigadier has been flown both ways with equally satisfactory results. Back in the early days of U-Control we used the term 'two way' to describe Free Flight models with bellcranks and elevators added; fortunately the newer connotation denotes a more successful approach. The Free-Flight to U-Control conversions were also called goats, which says it all; a more appropriate name for this Brigadier would be a lamb.

The Berkeley Models' Brigadier (oz 238) was kitted in 1940 as a powered Free Flight model for beginners; a look at the drawings will reveal a concentrated effort at simplicity of structure rare in a model of that era. Obvious consideration was given to minimization of parts, avoidance of difficult techniques, and ease of maintenance. When compared to the average Free Flight of the immediate pre-WWII era, we can quickly see a parallel concept of the Brigadier with the 'Quick Stick' and similar utilitarian designs of to-day. Although of square design, a certain cuteness characterized the Brigadier, once again proving that classic simplicity can be esthetically appealing.

The Brigadier was promoted as part of the Air Youth of America program initiated and sponsored by the Hobby Industry Association in cooperation with the AMA, much as they support the Delta Dart program of today. Unfortunately, the AYA program was interrupted in its infancy by the events of December 7, 1941, and became only another nostalgic item in the fascinating series of developments that led to the present state of the art in our hobby.

The immediate postwar era saw a program developed by the HIAA and the AMA in conjunction with the Plymouth Motor Co, in what could well have been called the Golden Era of sponsored programs. The local Plymouth Dealers held contests with the winners advancing to regional, then national contests in Detroit, but that's another story.

I've explained the AYA to anticipate the questions that letters on the tail of this 'Brig' always elicit. Under no circumstance is AYA to be confused with Gen George Custer's last words. Everyone knows George's last words were: Wow, look at all them Indians!

I once had a Brigadier Free Flight, powered with an Ohlson and Rice 23 ignition, unfortunately it was from a wartime kit with basswood longerons, cardboard ribs, covered with gift-wrap tissue and painted with enamel; for some reason, it didn't fly well. (The good old days!) As my interest in Radio Assisted Old-Time Free Flight has grown by leaps and bounds, several younger modelers have asked: What would be a good design to begin with? Invariably I've answered: You can't go wrong with a Brig. After seeing the result of building from the original plans, I decided to do a modernization to eliminate several glaring weaknesses in the structure.

Please be cautioned that this model does not meet the rules of the Society of Antique Modelers, and can not be flown legally in their contests. Frankly, the SAM events are degenerating into a situation of one or two predominating designs, powered with screaming Schnuerle-ported engines, and really intense competition - just exactly the thing most of us started flying Old-Timers to get away from. The leadership of SAM is sensitive to the problem and is actively seeking correction before it becomes too late. Good luck, guys! If your bag is with with SAM, go build something else. If however you are in search of a project that will give you many hours of relaxed fun with a minimum of building effort, a cute little .09 sport trainer, then the Brigadier is for you. Let's build one..." 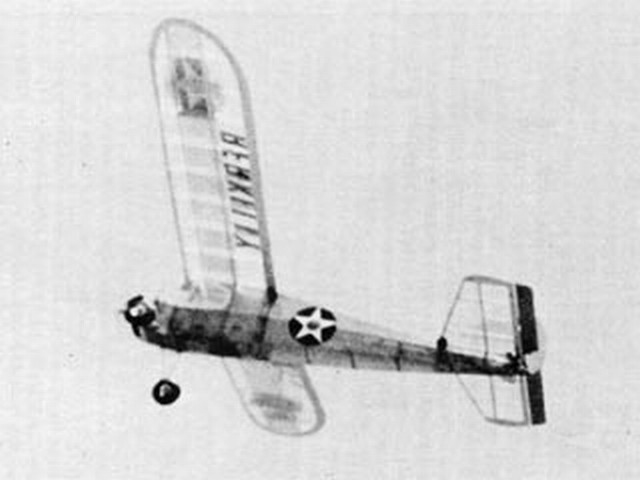