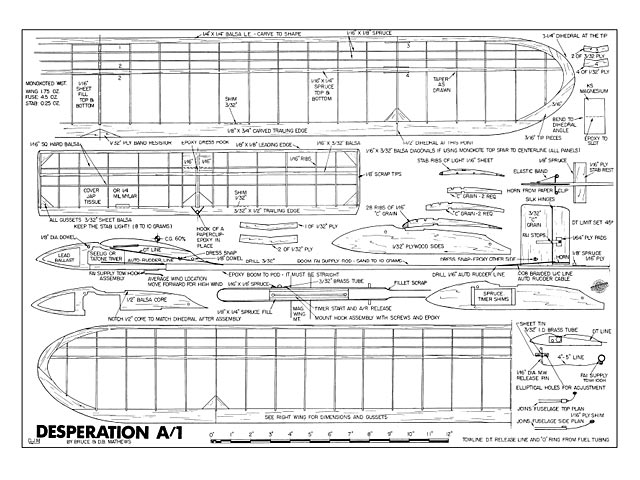 Quote: "Bruce Matthews is no stranger to competition, nor is he unfamiliar with Nordic flying, having won A/2 Nordic at the Nats in '71 at the ripe old age of 10 by clocking a time that would have placed him 4th in Open. He's also set a National record of 15:42 under adverse conditions, and finished second at the Nationals in A/2 Nordic on two other Occasions.

He does not, however, by choice or inclination, spend a bunch of time with the smaller brother of the A/2, the A/1.

The little A/1 is spookier on tow, harder to keep in a thermal, and just generally more of a nuisance to get consistent times out of. It is a challenge, though, and liking challenges, Bruce elected to fly A/1 at the Nats in '74. His only real A/1 contest experience prior to Lake Charles was at the big Southwestern meets in Dallas where he won the event in Jr. A/1 with a modified kit design renamed the 'Lead Sled' for its overweight characteristics.

Wanting a ship more competitive than the 'Sled,' he built two of the most promising magazine designs of '74. Both were consistent, but both were disasters - light, fragile, and useless in wind over 10 mph. They simply would not penetrate.

Finally, a scant week before the trek to Lake Charles, Bruce and his dad, DB ('Doc' to his friends), sat down to analyze the situation at hand. They concluded that they were trying too hard to stay close to the 5.08 oz minimum. Since Bruce had a Wakefield only 15 sq inches bigger that came in at 8.3 oz and still thermaled with any A/1, they reasoned that a Wakefield airfoil might work well in a slightly overweight Nordic.

Jon Davis' Maxine airfoil was chosen for its ability to handle wind. The Maxine wing shape was retained but was reduced to A/1 parameters and covered with Mono-Kote to get away from the perforation problems of tissue. The resultant plane, born in desperation, is heavier than an ultra-sophisticated A/1 but will tow with improved stability, and can take the rough and tumble of contest flying.

Flinging the Pieces Together: The 'Desperation' uses only Sigbond or Titebond for construction. No cement was used because of the necessity of retaining joint flexibility under towing stresses.

The ribs are all of firm but light C-grain 1/16. A 3 x 36 in sheet should weigh 12-15 grams (1/2 oz). Make a pattern from the plans using tracing paper, spray it with Sprayment and stick it onto 3/32 or 1/8 plywood to make a template. The ribs can be stacked, pinned, and cut on a jigsaw or carved. Be certain to cut all spar notches true and accurately.

Cut wing tip pieces in the same manner and glue together, pinned flat on plan, previously covered with Saran Wrap. The trailing edge must be warp free. The best method is to cut if from a sheet of 1/8 A-grain, then use a razor plane and sanding block to create the tapered shape. After final sanding, mark the rib notches over the plan..." 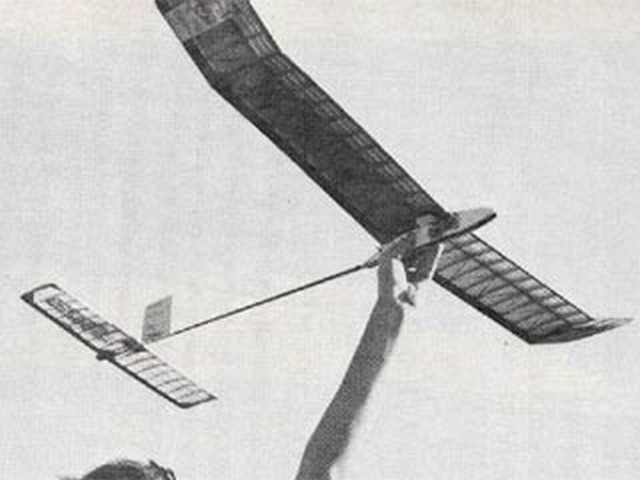