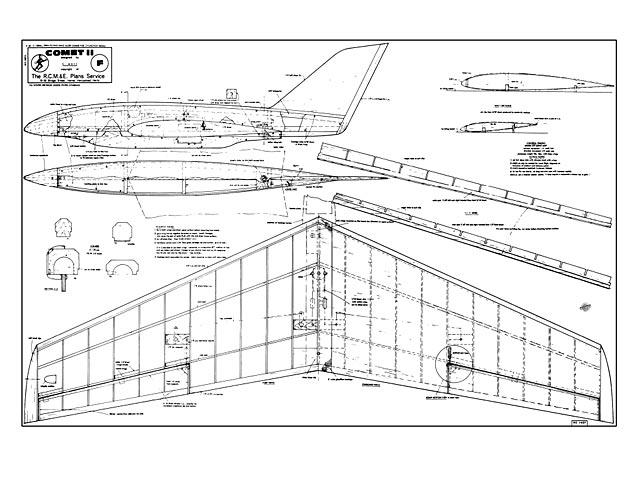 Quote: UNUSUAL AIRCRAFT have always interested me, which probably explains what has become to be an obsession with the Me 163 'Komet'. This interesting rocket powered flying wing fighter was developed during World War II for service with the German Luftwaffe and it did indeed see limited action towards the end of hostilities. My first 'Komet" model was flown as a slope soarer initially, although intended for powered flight, this method seemed an ideal way of sorting out any problems of trim, balance and control response, before powered flight was attempted.

Since the successful completion of the .60 powered stand-off scale Me 163 (oz7303) project, I had often thought that a smaller, purpose-designed slope soaring version would make an attractive model. It would need to be smaller and slimmer than my scale version if it was to match my other design criteria of transportability, manoeuvrability and robustness, and thoughts gradually crystallised into the design of Comet II.

Although the model is in no way scale, nor intended to be, the wing planform is very much based on the successful Me 163 model. The resulting slope soarer is quite fast and aerobatic, but does need a reasonable breeze to keep it aloft, and above all it's appearance in the air certainly fulfills my wish for something unusual.

Construction My first Comet II, Mark I if you like, used a foam cored wing. Blue Styrofoam cores were used, skinned with obechi veneer, strong but not too heavy and quick to make. It is absolutely essential to include the 4-1/2 to 5° washout in each panel, and this must be incorporated at the core-cutting stage. Quite simply, mark a horizontal datum on the root end of the blank, and then make sure that the tip datum slopes up towards the trailing edge by 1/2 in (12mm), It is then important not to distort the cores whilst veneering. Use the

blocks from which the cores have been removed as a support cradle whilst applying the veneer.

Foam cored wings dictate the use of torque rod ailerons connections, the ailerons are the same size and position as for the built-up version, but do use substantial pianowire for the torque rods, 12 swg is fine.

My method of building conventional structure tapered wings bears description, part sandwich method, and part 'jig-sanded'. Cut out tip and root rib templates from aluminium or Formica and produce a roughly finished sandwich of ribs. Mark centre lines on all ribs before dismantling this sandwich. Assemble the spars onto the ribs and then contact glue the templates onto the outside of root and tip ribs. Using a long sanding block, finish sand the intermediate ribs, running the block over the hard facings glued to the root and tip ribs. This method ensures that the gluing surfaces of the ribs match up exactly to the sheeting. Add the false leading and trailing edges and sand again..." 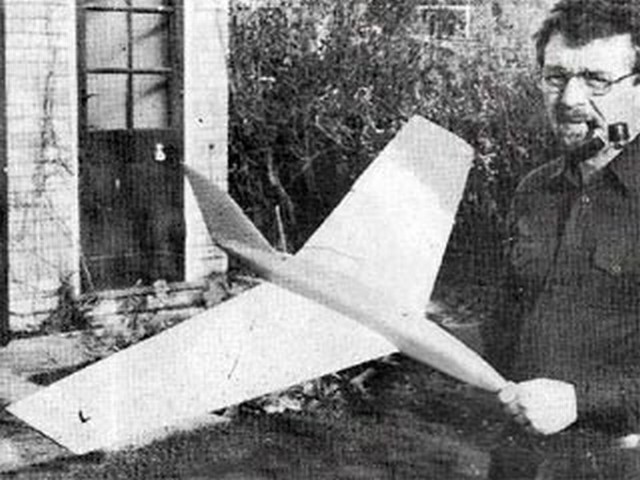