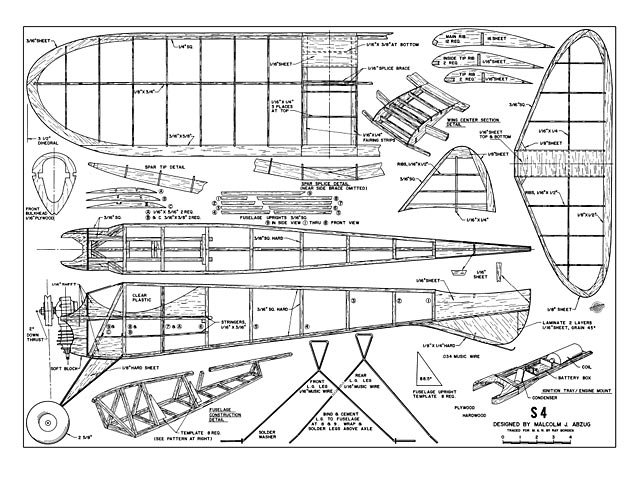 Originally published in MAN, January 1939. This is a later reprint from MAN, October 1979.

Quote: "How to build a three-foot gas model. Here is a beautiful flier that is simple to build and easy to transport.

IF YOU join the large group of gas modelers who are hailing the small gas job as a great step forward in our hobby, you are faced with a peculiar paradox. In almost every field of design that you can think of, full size aeronautics not excepted, progress is achieved by an increase in the size of units. The bigger the ocean liner or air transport, the more reliable it is; and the safer and more efficient does it become. Exactly the opposite seems to be true of gas models.

Why this is so is not evident. All we can say is that while these small gas jobs are not capable of turning out long endurance flights, they are much more dependable. They seem to be able to take 'in their stride' rough handling and hard landings that would demolish models that are twice as large. In addition, they obviously have the edge over the big fellows when it is a question of ease of construction, of transportation and of setting up for flights.

A grave disadvantage of the big gas models is the fear of losing months of work, as well as a considerable sum of money. That throttles whatever original work a builder may be contemplating. On the other hand, a small engine fairly begs to be mounted in a model that is a little out of the ordinary. You see, there is so much less to lose if your friends are right and you are a crackpot after all.

In glancing over the design of the S-4, one thing should be almost instantly apparent. Here is a gas model that is almost as simple as it could be. The elimination of unnecessary construction was kept foremost in mind while the designing was in progress. The result is a model that will fly out of your workshop in about twenty hours to begin a long career of thrilling flights. The S-4 usually outclimbs every large gas job on the field with ease; but like most of the other small gas buggies with which we are familiar, its soaring possibilities are rather limited. However, this last disturbing fact is so far outweighed by the previously stated advantages of these midgets that we are sure that as soon as the movement to put them in a separate, class by themselves at contests becomes widespread, the eight to ten foot 'barn doors' will be definitely on the way out. We're afraid that we are finding it hard to wait for this to happen.

Fuselage: In keeping with the gen-eral simplicity of the S-4 it-self, we have tried to make the plans as clear and as helpful as possible, by including a large number of full sized patterns. Transferring these patterns directly to your materials by means of templates, or carbon and tracing papers, will save quite a bit of building time and give you a better model. Pay particular attention to the odd angles at which the fuselage compression members are cut. Getting these angles made correctly is very important for the strength of the completed fuselage. We suggest that they be cut out of 3/16 square hard balsa directly on the magazine plans, and numbered immediately to avoid confusion. It is also wise to place a spot of ink on either the top or the bottom of each piece to avoid reversing them. A sheet of wax-paper over the plans plus careful work will prevent you from harming your magazine.

This work can be done while the flat basic fuselage framework is drying. The latter is built of 3/16 square hard balsa on a full size top view layout of the fuselage. To judge from the number of requests that a draftsman gets for full size reproductions of the magazine drawings, the job of scaling up plans is the hardest part of building a gas model for many fellows. However, just a little familiarity with a ruler and 30-60-90-triangle should make it easy to enlarge plans. You will find that a roll of ordinary shelving paper is an excellent medium for this work. 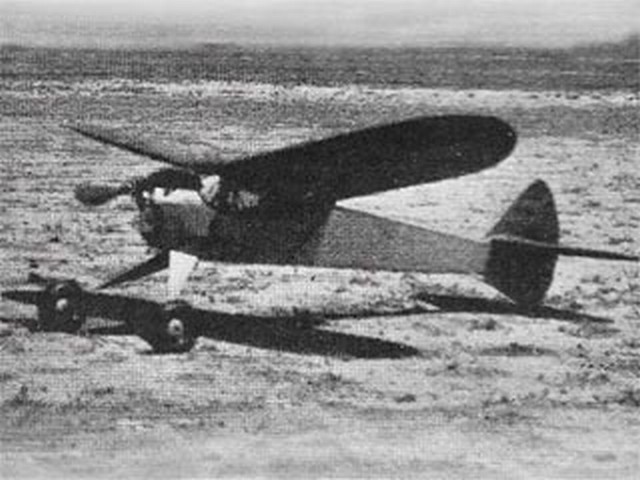