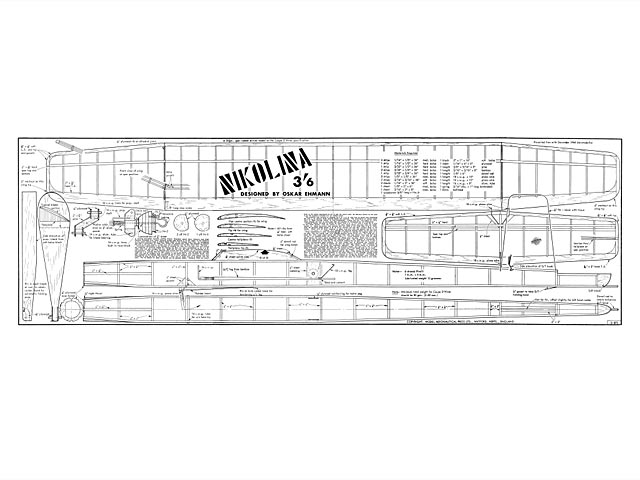 Quote: "A CHANCE DISCUSSION between visiting French Wakefield expert Marc Cheurlot and West German Wakefield flyer Oskar Ehmann during 1963 proved to be the origin of the adoption of the Coupe d'Hiver class of rubber driven model by the German Aero Club. So contageous was Marc's enthusiasm for these little Winter Cup models that Oskar was inspired to promote the idea in his own country. Fifteen year old Uli Schmid won the first event with 'Nikolina'.

Commence construction of the fuselage by building the base over the plan view and cutting the longerons to accurate length but leaving the first two bays unconnected (1/8 x 1/8 in cross piece and sub stringer left out). Make the top over the base, but terminating at the tall platform. Fret the 1/16 plywood nose former and then cement top and bottom fuselage longerons to it, making sure the right thrust is 1/12 in as shown.

Pin the base flat over the plan view and fit uprights from u/c position to the motor peg (4 bays constant depth) then add uprights at fin trailing edge position and fill in other uprights and cross braces with sub stringers at nose as well as tail platform. Take care to make sure all is square over the plan. The fin should be offset as shown and all gussets added.

Distance from the motor hook to the motor peg should be set to suit the motor used..." 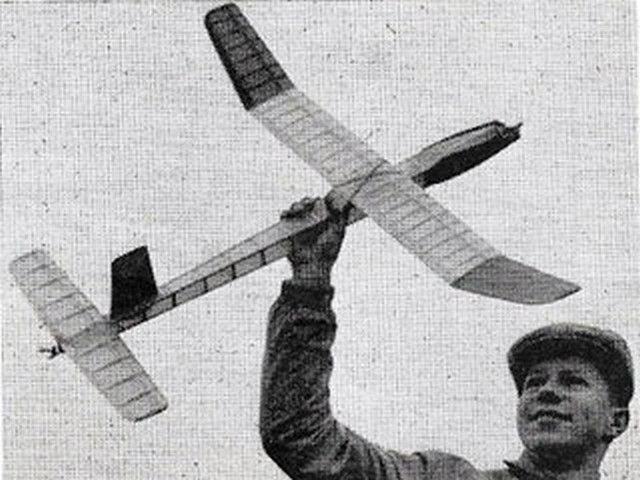 Very happy to see that the Nikolina Plan is up on the Zone. I built this one in the spring of 2015 from this same plan. It's a very straightforward build except for the prop hub. A homemade jig was a big help, along with a lot of forethought... then I had to "forethought" again! But, once I had it, I had it. It ranks right up there as one of my favorite models. I'm sending a few pics of the finished model [more pics 003-006]. Keep up the good work!
David - 10/07/2017
I am now about to get started over delaying a build on the Nikolina for best part of 6 months. I started with the Propellor hub, and have balsa for two sets of prop. blades standing by (since this time last year)! I think I may do two prop hubs and see which is best/offers best strength to weight as I am not sure it will be robust enough with the pine centre. I have some harder Tulip Wood bits to try also. I have also given this part much forethought too, and have found some 16 swg brass bushes to put in centre of the pine hub maybe (instead of just a drilled hole through) - it is very old school. I did actually commence work on this model during my O levels (also old school GCEs!) in 1978. I got as far as most of the fuselage balsa construction before I finished the exams and spent the summer working in a carpet warehouse and pursuing an alternative athletics career. The latter effectively took over from aeromodelling for the next 30 plus years. Now I am using the same Aeromodeller/MAP free plan 40 years later. My Dad kept all this safe for me - plus the unflown Garter Knight I had meticulously built in 1979 for the winter French/English completion. After he died in 2012 I initially meant to build a KK Slicker as I inherited a photo from 1950 of him about to launch this. Instead I got round to a rushed refurb. of the Garter Knight using a Performer kit propeller assembly and entered the Coupe de Brum (at a windy North Luffenham) a couple of years later in 2015 I think. It flew all rounds great with no trimming, but to be fair with my old unadapted Stanley winder and first time helper, I was too scared to put too much turns on with the strange narrow rubber (I could not find the old stash of ?" dark tan Pirelli from Henry J Nicholls). The Garter Knight wing got dashed in half by the strong winds on way back from the last flight at the North Luffenham trip. I did not mind, it was a surreal experience after a 38 year delay and I was just a bit euphoric. I am hoping this little Coupe may make this contest for me again - this year ... or sometime in the future.
JohnWheeler - 14/11/2018
Ok, I am now getting on with it, prop assembly done 2019, and got out again a month ago (September 2021!). But have noticed a few errors on the plan, which are confusing for wing and tailplane. Now I know why I gave up in 1978, it was not just the competing attentions of O levels and working/sport!
So anyone out there reading this, please suggest (if you know) how the wing construction really goes, main section ribs with undercamber, tips with flat bottom rib profile? Is this right? I am now desperate/determined to finish it soon to fly in an event or two...
John Wheeler
PS. I warmed up at end of this summer with a Senator build from the plan - all the ribs on that have the undercamber, tips included!!
John Wheeler - 12/10/2021
Add a comment