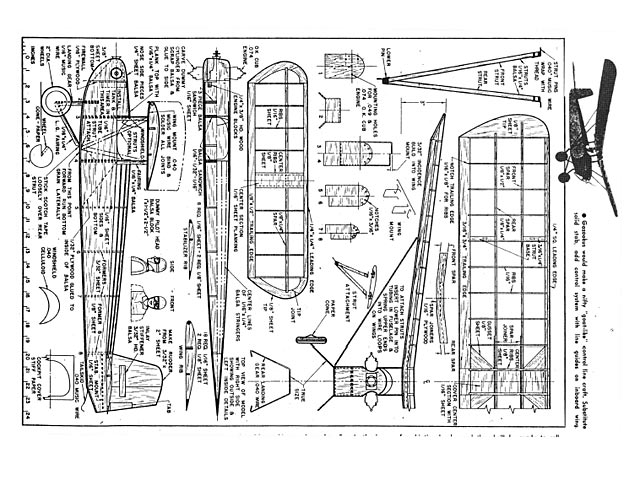 Quote: "It struck me that some readers may have wondered what Gazookus looked like, and in any case it is a fine sports model of the type so popular with enthusiasts today and is truly vintage.

Designed by S Calhoun Smith one of the multi-talented contributors to our model literature it represents a typical American 'home built' of the late 20s early 30s and was described in the August 1950 issue of Air Trails.

Although Cal Smith designed every sort of model he built them 'so lovingly they couldn't help but fly', he was less interested in competition flying but fostered a keen interest in sports models and catered for the average Sunday afternoon flyer by explaining: "Most modellers have only limited flying time available and the best way to get the most out of it is with a good free flight sport design. No new records, no out-of-sight flights - just good looks, good steady flying and the ability to get home in one piece."

He was speaking of his 54in span Sportwagon (oz5310) in this case but this philosophy applied to all the other sportsters he created, including Gazookus.

My Gazookus built some 25 years ago more or less became a family pet, it did a great deal of flying and survived long enough to be re-covered, its only fault was that no timer was fitted and one was never exactly sure how much fuel was in the Cox .049 tank, sometimes the chases (the children loved these) were long romps keeping it in sight. This haphazard operation eventually led to the loss of the model.

Because of the simple outlines the main components can be easily drawn up on a bit of paper with single pencil lines which is adequate for construction. The inch scale provided means that sizes can be picked off directly from the magazine plan with dividers. This will save the expense and trouble of enlarging by photocopier.

Some modification will be called for if a beam mounted engine is used, and bearing in mind the flyaway nature of the design, a timing device should be fitted.

The original powered by the OK Cub .074 (1.2cc) used a wedge tank with the wedge pointing downwards and utilised a Spitfire timer valve in the fuel supply line to the engine. As shown on the plans these components were installed between the engine bulkhead and the cockpit.

Note that the fuselage sides from medium hard 1/16 sheet have 1/32 plywood reinforcements from the engine bulkhead aft to former 5 and this provides the necessary strength in the area of engine bulkhead, undercarriage and centre section cahane struts. Weight the sides down flat until glued to prevent warps. Formers 2, 3 and 4 are two layers of 1/16 sheet with the wire struts for undercarriage and centre section cahane struts sandwiched between them. again weighted down flat to prevent warps when drying.

The fuselage is assembled over the plan view. the first four formers serve to line up the sides which are parallel to former 4. The formers 5 to 8 are rectangular with the curved tops for the stringered turtleback added later. Having got the forward part of the fuselage true the construction of other components is self evident from the plans. Do not omit the cross grain stiffener on the vertical tail surface which makes that component less liable to warp in service..."

Article page, text only. This is not the original 1950 article, actually a later 'nostalgia' section from Aeromodeller, but useful. Also, previous scan version. 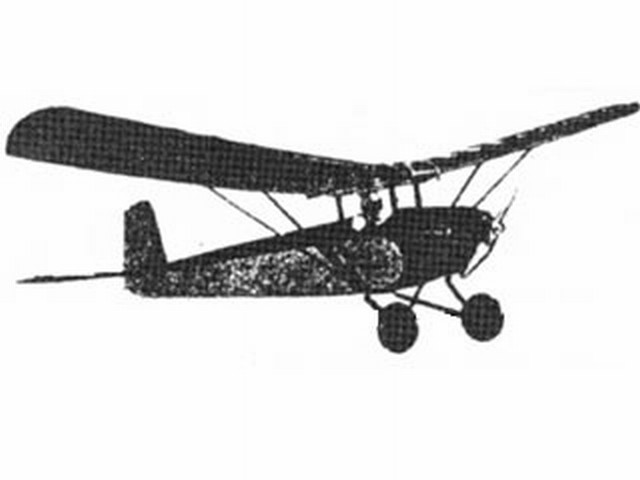 Hi Steve - positive feedback:-) The Gazookus plan is definately workable, and turns into quite a pretty plane. I have just finished a plane based more or less on the plan - but its extensively modified, different wing, different fuse construction, different nose, etc. So, its not really a Gazookus anymore. Regardless - it was fun building it, so thanks again for your site- it brings so much pleasure to so many people.
Al - 08/07/2013
Add a comment