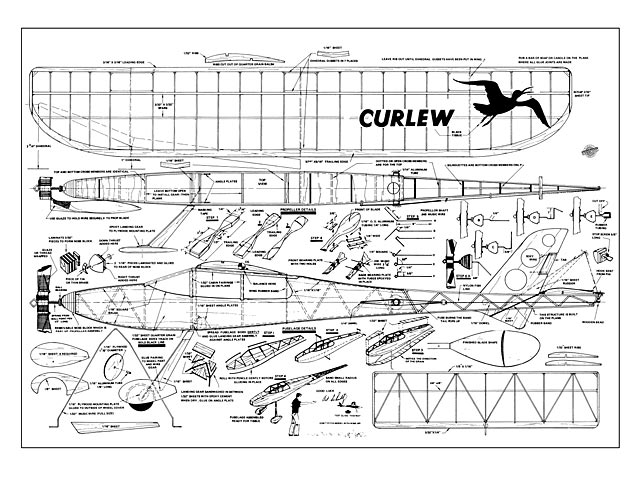 Quote: "A most handsome and stylish rubber model adaptable to Coupe but really intended for sport flying. Duration - about two minutes in dead air.

Fred Bodsworth of Toronto, Canada, has written a book called Last of the Curlews, a classic. The Curlew, which winters on the Antarctic tip of South America and flies almost halfway around the world to breed in the Arctic Circle, has probably become extinct. My model, the Curlew, is a tribute to the stamina and courage of one of the world's most beautiful creatures.

Construction. Fuselage: Trace one side carefully on a 1/32 medium quarter grain sheet using a sharp, medium hard pencil and carbon paper. Cut a second sheet the same length and stack them together with a small piece of masking tape on each end so they will not slip when you cut through both sheets. Now cut out the sides going slowly around the little radius on the back window. Both sides will be identical using this method. Pin the sides down over the plans and glue in the cabin struts and the front window frame.

After cabin struts are dry on both halves, trace the 1/16 stiffeners on the inside of each fuselage half, being care-ful not to press too hard. Glue the longerons on first by rolling them light-ly with a dowel or a round pencil. The 1/16 square stringers will nearly take on the same curve of the body and simplify gluing them in place_ Cut each stiffener and glue in place. Don't forget the landing gear angle pieces, which should be glued well.

Joining the two fuselage halves isn't difficult, but it does take a little patience and care to insure proper align-ment. Prop the sides upright on your workboard and glue in the front di-hedral cross brace and the bottom cross brace. Join the fuselage ends at the back with the cross members directly behind..." 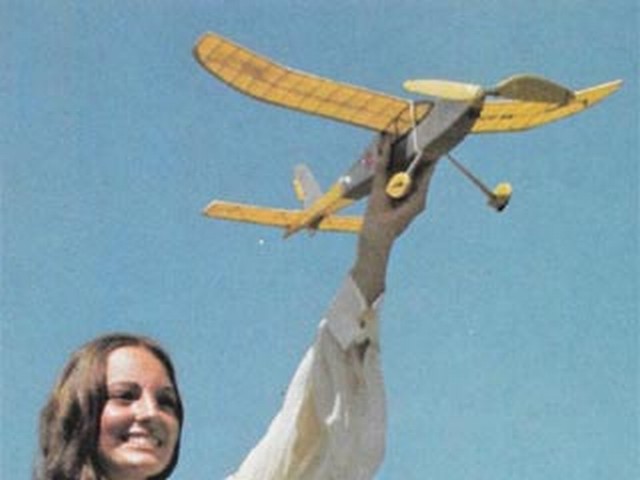