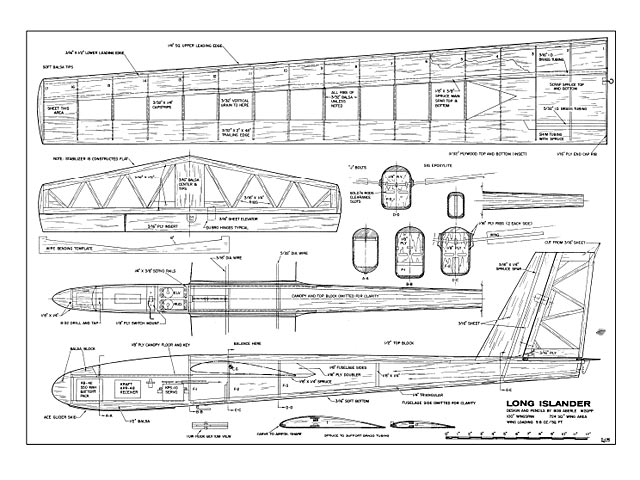 Quote: "The 'Long Islander' is a third generation glider for the author. My attempt, in this particular design, was to have a model of easy construction, with better than average strength and performance. Wingspan was chosen as a function of available 48in balsa and spruce to eliminate the need for splicing smaller lengths. Using an aspect ratio of 13.7 to 1, the resulting wing area was 724 sq in. A wing loading of 10 ounces per square foot was considered a good design goal to provide a compromise between slope and thermal soaring. This works out to a total 'full up' plane weight of 50oz. The original model came close, weighing 49oz, using a 1969 vintage Kraft four channel receiver, 550mah battery pack and two KPS-10 servos. Bare model weight less radio amounted to 37oz. Not bad considering the wood size and selections made. For example, the wings use 3/32 sheet throughout instead of the more common 1/16 and the fuselage employs a top block of 1/2in balsa which is not even hollowed.

For years I've read R/C glider articles in the various magazines. Most articles cover the usual details of building the wing, tail, body, etc. and casually omit the most difficult part of the construction, the mounting of the wing wires and the receiving tubes located in the wing halves. During this article I hope to stress this important point. When the Long Islander was originally drawn up it was hoped that the wing could remain in one piece. The first set of plans were sent to several modeler friends around the country for comments prior to the start of construction. The unanimous opinion was to go to a two piece wing system. The reason for this is not transportation difficulties as you might expect, but the need for some flexing in the center-section. This flexing is essential in absorbing the wing loads imposed during hi-starting, winch towing or even air current drafts encountered during slope soaring. Suffice to say we went to the two piece wing..." 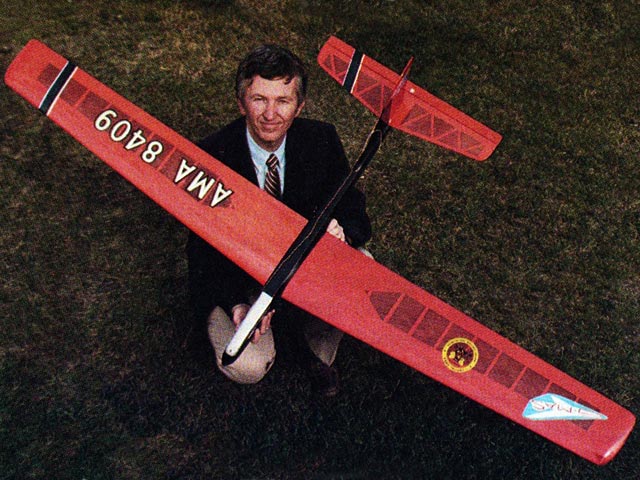