The original Ken Willard Top Dawg (oz901) design was published in RCM 1966. This is the Top Dawg as kitted by Top Flite, a year later.

THE contents of this new Top Flite kit were described in the September RM Trade News and, having built the model, I can now endorse all that was said. Not having built a kit model for some years, perhaps I may be excused for having forgotten the golden rule: Study the plan and building instructions. Some little time spent doing this, and in identifying tile various parts, will pay dividends in avoiding the pitfalls that can be experienced, if one is over-eager to get started.

Constructional Pointers: The fuselage sides are 'framed' with 3/16 square longerons and uprights, after marking off their positions from the plan. The position of the top main longeron is a little vague, due to other parts in the construction; it should lie flush with the top of the fuselage sides, overlapping the cut-outs at the rear ends and ending flush with the front face of the engine bullchead.

A welcome new feature of this kit is the incorporation of a fuselage jig - in the bottom of the box! The fuselage sides slide into the jig and the jig-supports have hooks at their top ends to allow for rubber bands to be stretched across, holding the assembly rigid during construction.

Although the sequence instructions call for the turtle decking to be added before the wing is made, it's a good idea to have the wing finished and held in place on the fuselage before commencing this rather tricky operation. The turtle decking parts are cut oversize, to allow for trimming to size after checking the fit, and this is the only part of the model that does not 'fall together.' Some care and patience is called for here, to ensure a perfect fit at the wing fuselage junction.

The wing is easy to construct and makes up into a very solid unit, the only rather weak point being the plastic moulded tips, which are held to the main structure with either sellotape or strips of MonoKote. If you are going to cover the wing in anything that requires doping, watch those tip ribs! They have no solid wing-tip to support them against the pull of a well doped covering.

The wheel spats are of block and sandwich construction, and add handsomely to the appearance of the finished model, although their ability to stand up to the wear and tear of British type flying fields is limited - mine have already been 'removed', and I fly from a well-kept runway!

Installation: An O.S. 10 R/C engine, 2oz square metal clunk tank, Futaba s/c radio and home-built galloping-ghost actuator, gave an all-up weight of just over 30oz - just about right for Top Dawg's 326 sq in of wing area. A steerable tailwheel fitting is included in the packet of accessories, and I connected this up in high hopes of doing some multi type ground manoeuvres. Trials in the safety of a large hangar proved very successful, but out on a breezy airfield quite the reverse happened. In fact, all hell broke loose when the throttle was opened to full chat for take-off, spectators moving rapidly in all directions, before I remembered to hit the engine-slow button! So the tailwheel was made non-steerable before flying was attempted and is not an idea I recommend for GG.

Flying: The first fiight was 'straight off the board,' the model showing no vices at all. In fact, this is the easiest model I have ever 'first-flown' - honestly! With GG systems, though, the Top Dawg is very sensitive to elevator control. This is, no doubt, due to the very large elevator (by GG standards), which is 1-1/2 in wide, at its widest part. The rudder, on the other hand, is too small and, even when using the maximum throw available, turns are really far too wide. Easily remedied, of course, by making a new rudder from scratch or adding a half-inch strip to the trailing edge of the existing rudder, and reducing the elevator width by about half.

With the O.S. 10 for power, Top Dawg is very nippy and ideal for small-model plyon racing. Throttle the engine back a shade and you have a very docile model. With a simple rudder-only set up, and a good .049 engine, I have no doubt that it would be a very pleasant and safe model for ric beginners. Of course, for the iron-nerved 'pudding stirrers', a .15 engine will put tihe Dawg in the 'hot' class which, apart from turning in some fast circuitry round the pylons, should also be capable of some pretty fancy stunts.

General: To sum up: Top Dawg is a quick-to-build and easy-to-fly model. A little pricey, perhaps, by British kit standards, but when you weigh this against the quality of the parts, accurate die cutting, plastic mouldings and really comprehensive accessories, giving a model that goes together like clockwork - the price doesn't seem unreasonable.

Update 31/12/2020: Added formers file, thanks to Balsaworkbench. Note this is a scan of the die-stamped balsa sheets that came with the kit. 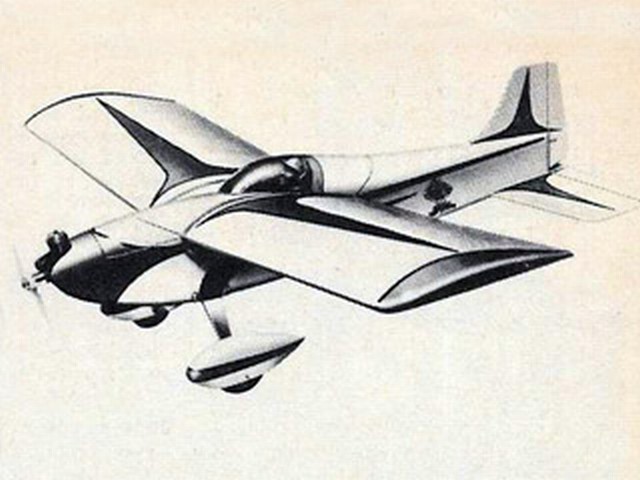