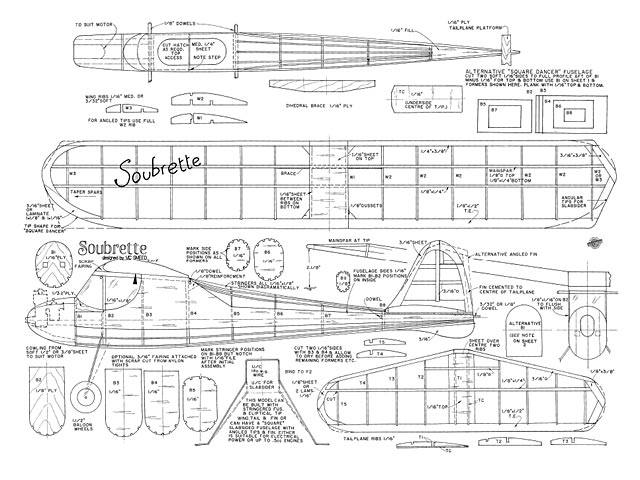 Quote: "Here's a 30 in span, small diesel-powered sports free-flighter for those who like a traditional build. R/C optional if preferred.

This model was designed to take one of the superb Derek Giles 0.5cc motors - before the motor was run and it was realised that it produced at least as much power as a good Mills .75 - strictly a back-to-the-drawing-board situation! To use a Mills .75 it would be advisable to get the drawing blown up to 120%, ie 36 in span (or 130%, 39 in span) something which is easily done nowadays by a print shop such as is found in any reasonable-size town. Most of the wood sizes could remain the same, only the wing leading edge needing to be altered. Otherwise a shade harder stock might be advisable, plus of course a degree of common sense.

The error of producing too small a design was mentioned in a conversation with Mike Parker (Hull) who, on learning that the 30 in drawing existed, expressed interest in seeing it, liked it, built it, and asked if it was okay to make a copy of the plan for Doug Wass, a full-size glider enthusiast wishing to make a return to model-building. Thus these notes are based on the exprience of these two gents, both of whom preferred the stringered, round-tip option.

Option? Well, yes, there are actually two models on the same drawing, the second one, Square Dancer being a slab-sided version with angular tips to wing and tailplane and a different shaped fin. It is all explained on the drawing but at the time of writing, it has not been built. It would be simpler and quicker to build and a better model for anyone wanting a small model for today's miniature R/C, say nudder/motor control or, at most, rudder/elevator/motor. It could be a possible choice for the 'works' of a written-offf RTF park flier?

There is nothing unusual about the construction of either model, though either would better suit someone who has already built two or three models rather than the average complete beginner. For the stringered fuselage, start by cutting the fuselage sides, shown by the heavier lines, and mark them both with the former positions.

Trace and cut the farmers, mark notch positions, but leave them for cutting after basic assembly. MP came up with the neat idea of cementing a 1/4 in sheet spacer between the engine bearers and drilling the engine mounting holes (Banks Mills 0.5) before sliding into place on B1. The undercarriage should also be shaped and bound to B2.

Join the fuselage sides with B3 and B4; if B2 is included at this juncture it will be necessary to let the undercarriage overhang the building board. MP allowed B3 and B4 to dry, cut out the cabin top and then assembled B2, 3 and 4..." 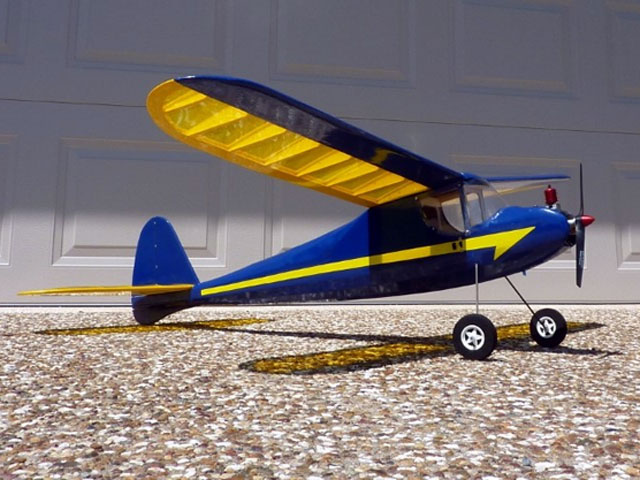 Added lovely pic of the finished model, thanks to AlphaWhisky [model photo].
Mary - 20/01/2020
Add a comment