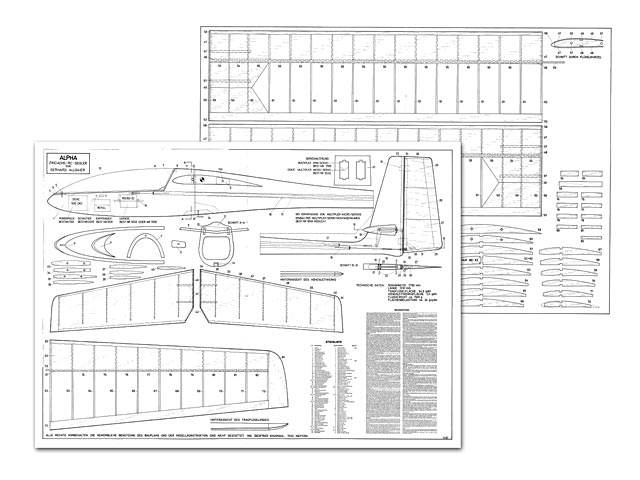 The Multiplex Alpha sailplane was sold in two versions, with either ready-made fibreglass or built-up wooden fuselage construction. For the wood version see Alpha-H (oz8874)

HAVING been somewhat impressed by the elegance and range of this West German manufacturer's kits which are being imported and distributed by Crescent Products, I was particularly pleased to be provided with the opportunity of trying to convert the advertising literature into the flesh!

The Kit: My initial reaction upon receiving the relatively small box was to wonder how a glider, which when complete spans 112 in and is some 48 in long, is packed into such a small area. Removing the lid provides the answer, when one views the number of nicely packed components. Centrepiece is the epoxyglass fuselage and blue canopy. All timber is die-cut apart from sheeting, all components are either numbered or easily identifiable from the two sheet plan and comprehensive building instructions. The quality of timber sheeting was slightly variable but none was bad. Hardware items such as push-rods, hinges, bellcrank and horn are all included.

Building: Well, fellow modellers, this is where I set out, hopefully, to be of assistance to others who build this kit. For from my mistakes you may take heed. However, this is not meant as a reflection on the kit but merely to indicate that if a mistake was possible, rest assured, I made it!

Fuselage: Where do we start? The construction booklet suggests the fuselage and as this seemed to be as good a place as any that is where I began.

1. The first module of construction relates to the canopy formers which, in the booklet, are numbered 3 and 5 but which should, I believe, in fact be 6, 7 and 8. The plan makes this point clearer than the booklet and was the only area of discrepancy I found between the booklet and plan. Former 6 which is partly die-cut on 1/8 ply should, I suggest, be increased in length by approximately 3/16 in to provide the opportunity of ensuring a nice clean fit to the outline of the fuse. Before fitting the canopy, I painted the framework in a blue to match the canopy, thus avoiding a change of colouring where the canopy is glued to the framework.

2. My first faux pas occurred at the next stage, positioning and drilling of the four wing mounting holes. The fuselage contained two small indentations which, I assumed, without checking the root rib or instructions, indicated the correct position for drilling. Alas! I was wrong, the results of which later made it extremely difficult in obtaining correct wing alignment and dihedral. The front steel wing dowel is permanently secured to the ply former by means of two small brackets, which go to make a simple but robust fixing.

3. Location and fixing of the bellcrank for the all-flying tailplane, follows conventional lines, with installation taking place through the rear of the fin. Do not forget to make-up and connect the push-rod to the bellcrank before the final installation. Whilst it is possible to make the connection after the bellcrank has been installed, I do not recommend it (after all you have only to install the radio gear once, so why not do it now!). To help with the positioning of the washers that go either side of the bellcrank, you may find it easier to thread the components on to a piece of cotton and feed either end of the cotton through the inside of the holes drilled in the fuse. This will quickly assist in rough positioning and the cotton can then be threaded through the hollow bear-ing for final positioning of the washers and bellcrank.

4. Final stages of construction relating to the fuselage are straight forward with the make-up of the rudder push-rod and cutting its exit in the rear of the fuse. Lastly the fin sternpost can be epoxied in place.

Rudder and tailplane: From the plan one quickly gets the impression that considerable thought has been given to keeping the tail-end very light. Both the rudder and tailplane are built up using conventional rib and sheet construction. One small problem that arose, which was easily overcome, concerned the six pieces of sheeting that largely comprise the rudder. These were insufficient in depth to give the correct area as depicted by the plan and required some small addition of sheeting to give the correct size. The all-flying tailplane is fully symmetrical, tapered and swept back. Components for each half consists of seven ribs sandwiched between 3/32 balsa sheets, leading edge (not pre-shaped), block-tip and two brass guide tubes.

Construction is straightforward, but one is advised to slightly pack up the leading and trailing edges of the bottom sheet, to ensure good adhesion between the symmetrical rib and sheet. To ensure perfect alignment of the guide tubes, the six appropriate ribs were drilled in sandwich fashion prior to gluing in position. The tailplane sheeting in the review kit, varied in texture and car was needed to avoid instant cracking. The finished structures, despite their light construction, have proved to be adequate for the purpose required.

Wing: Each wing is largely constructed in two separate units, which are eventually joined to give an overall span of 53-1/4 in. The 8-1/4 in chord remains constant for 31-1/2 in of the span. The second unit has a trailing-edge and rib section tapering to the 5-1/2 in chord at the tip.

Building follows conventional techniques and although obviously comprises the largest proportion of actual building time, goes together fairly quickly if one has sufficient room (and building board!) to organise the building of both wings at the same time. A few tips worth noting are as follows: check that all ribs are an accurate fit on the spruce spars, particularly the ply root ribs which carry the guide tubes for the two steel wing dowels. Again, I found it useful to place a 1/4 in width strip of 1/16 under the leading-edge of the bottom sheet to assist the gluing of the.ribs at the leading-edge and the retention of section.

Faux pas number two- nearly happened and concerned the fixing of the trailing-edge. As the ribs are all under-cambered to provide a high-lift section, it is important to ensure that the trailing-edge follows this same section and should not be glued in place, flat on the building board. The instruction booklet provides the answer in diagramatic form!

Building the tapering outer-wing units follows the same pattern and is joined to the main unit before the fixing of the leading edge and top sheeting, both of which are added later when the wash-out is built in.

Finishing: This particular aspect of modelling is very much an individual choice and as I could not imagine the real thing being a mass of colours, I decided just to use silver and red with a few black trim lines. Plastic film was employed to cover the balsa surfaces and matching paints for the fuselage.

The instruction booklet warns that the fuselage may contain small blemishes. My initial examination, in its original state, did not reveal sufficient to give concern. However, after applying the primer, these blemishes are very much easier to identify and largely take the form of tiny pin holes in the surface. Remedial treatment is very simple using the filler of your choice, some fine wet/dry paper and a little elbow exercise!

Up and away (Flying!): Having balanced the model correctly by the addition of 3 oz of lead and provision for a rudder throw of 3/4 in either way and the similar amount of movement on the all flying tail-plane, we were all set for the static photographs and the necessary combination of correct weather and steady nerves.

The photographs did not prove too difficult, but the weather was a different story with winds either being too fierce for first flights or, when the correct strength, were, surprise, surprise, coming from the wrong direction for our slope.

I always prefer the slope to bungee for first flights, as it always seems safer because there is more 'insurance' underneath when I eventually let go. However, after two weekends of waiting, I was determined that, given the smallest opportunity, the following weekend was to be the appointed time slope or bungee.

Late on Sunday afterndon, the wind, although gusty, was just acceptable for a bungee launch and so, therefore, armed with all the bits and pieces, including the model and transmitter, the journey to the club field was made.

Range checked, all OK and all systems set to go. Standard bungee laid out with 125 yards of additional line. First flight was being made with an 11 lb pull. Transmitter and receiver switched on, connected to line. Pulse rate and adrenalin up, breathing in short bursts, quick flick of sticks, no excuses for any further delays, brave smile and signal to let her go - up and away - veering to the right - slight touch of left rudder restores correct climb, feed in a little down to reduce stress on those large flexing wings; climb flattens - prepare for release, apply a little up to stretch the line, and then she is free. From here on in, the flight was normal, the Alpha not showing any tendency to tip stall or indeed any other nasty vices.

Repeated flights indicated that the model is very sensitive, for at every little sign of lift or turbulence the wings rocked, and I am convinced that it will be a great performer, both for slope and thermal soaring. Two warnings: one - avoid too great a poundage on the line and steep climb, for like most models in similar circumstances, the Alpha can become very eratic when climbing under such conditions on the line.

Second warning - do not expect that at a distance of 75 yards and with a height of 10 feet it will land at your feet, it won't happen - not by conventional flying techniques anyway. It just keeps on and on!

Summary: If you want a model that (a) provides you with a goodly portion of building, (b) with an appearance of elegance and style combined with an excellent flight performance, then you will not be disappointed with this kit." 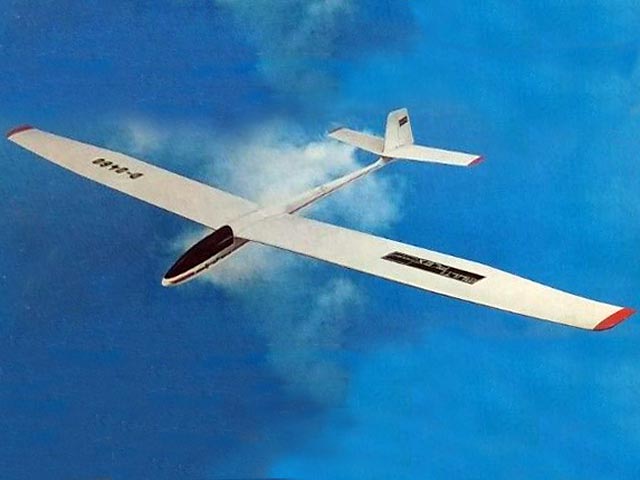