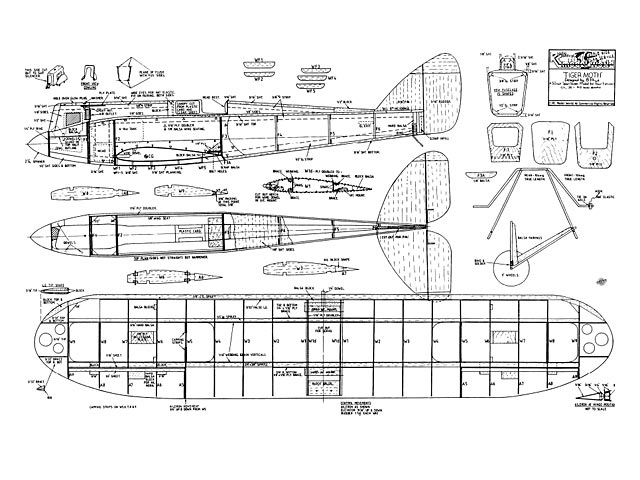 Quote: "On August 27, 1927 the Tiger Moth 71 broke the light plane 100km circuit record at 186.5mph, far in excess of anything possible with any fighter then in in service in the world.

I have always liked 1925-30 type racing monoplanes, and the only Tiger Moth 71 you could get for radio had a very large 80in. span. So I decided to design my own smaller version. Being a very short nosed aircraft with a lot of fuselage aft of the CG, I decided to design a 50in span and put a .35 to .40 engine up front to reduce the ballast needed (anyway the prototype was a racer). The model is close to the scale profile but owing to the large engine I decided to enlarge flying surfaces slightly, to reduce the wing loading.

The Tiger is very simple to build due to the fuselage being all flat sheet and triangular strips. The hardest part is shaping the cowl, but when finished it has a very nice streamlined fuselage. The wing is built up in the usual way. If you wish you could add a dummy engine over the engine cowl, but with a .40 engine this would be difficult. More information can be obtained from scale drawings plans handbook, plan 2959.

Fuselage: Cut out formers F1-F3 from ply, build up F4 and F5 from 1/8 hard sheet, cut out fuselage sides, glue 1/16 ply doubles to sides, making sure you have a left and right hand side..." 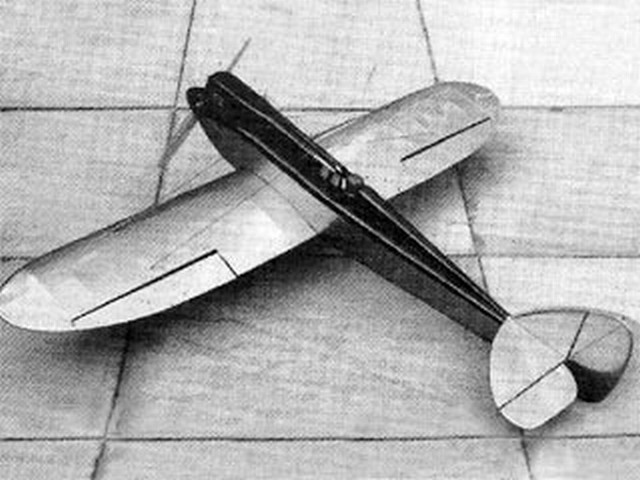 In the description that comes with OZ8873, the writer says he used Plan num. 2959 from the "Scale Drawings Handbook". Can you tell me if it is possible to buy this book and if so where from? I would be most appreciative.
Rob Lee - 02/04/2020
We're not sure which handbook it is, Rob. Does anyone out there know more?
Mary - 02/04/2020
Standard commercial plans collection. Argus Publications. That's what Google comes up with
Hubert - 02/04/2020
Scale Drawings Handbook was just a listing of all the scale drawings published over the years in Aeromodeller. #2959 was the reference number for the dH 71.
RFJ - 02/04/2020
DH 71 in Aeromodeller Jan 1945 if anyone has it.
Ted Avey - 02/04/2020
I built this model as per plans and powered it with an Enya 46-4C. When checking the centre of gravity the model only exhibited slight tail heaviness. Balance angle approx. 3 degrees. The model was unflyable and was lucky to get back in one piece. Setting the C of g balance to zero bubble required over 300 grams of weight. Consequently I moved the wing saddle back 25mm. You will also need to bring the landing gear forward otherwise it will tip on taxi and landing. If you decide to power with internal combustion I would recommend moving the wing saddle back.
An electric model may be able to move the flight battery sufficiently forward.
Good flying model as a racer, aerobatics are not the models strong suite.
Bob - 26/08/2020
You would be surprised how many times published plans are incorrect, center of gravity especially. I know how it's done because I've done it. I always draw my plans first before building the model, in order to work out details on paper before construction. I no longer pencil in the C/G location because it's just a guess at this point. The location shown on the DH71 doesn't look unreasonable but the size of the horizontal stabilizer must be considered, very small on this model. It's been my experience that a model with a small tail must balance in a more forward location to fly well, or at all. The Spitfire is famous for this problem. The opposite is also true. Many old timers have a gigantic stab, resulting in a very nose heavy condition. "Nose heavy models fly poorly, tail heavy models fly once".
Doug Smith - 26/08/2020
Add a comment