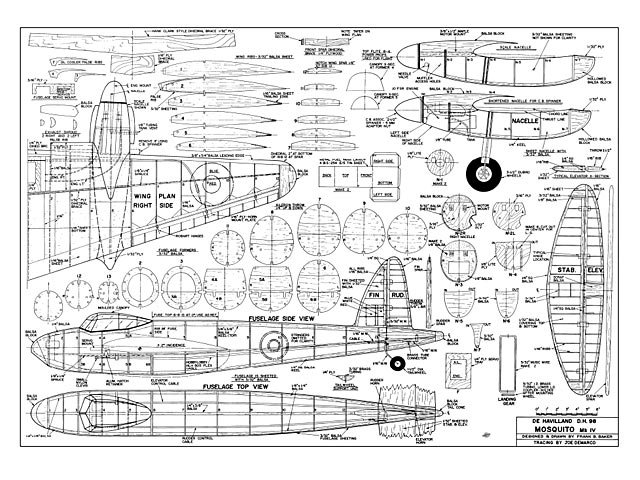 Quote: "Modelers seem to have a special affinity for this aircraft. Maybe it is because so much balsa was used in its construction. The model at 1/12th scale uses two .10 engines and four-channel controls. It's to scale except for the out-thrusted nacelles, a feature which gives the model amazing one-engine-out performance. DH98 Mosquito, by Frank B Baker.

THE PROTOTYPE is one of the best known British aircraft of World War II. For most of the war it was the fastest thing in the air. It was involved in many daring exploits, such as putting a bomb through the front door of the Gestapo headquarters in Oslo, Norway. The Mossie was also flown by a number of squadrons in the US Army Air Force.

A few still survive. Air Progress magazine has reported that Kermitt Weeks of aerobatics fame has one in Florida, but its flying status was not given. Amazingly, the prototype Mosquito survived the war as well as the scrap furnace; it is on display at Salisbury Hall in England, where it was built.

The Mosquito is one of the few full-sized aircraft that, when photographed, looks like a model airplane. This is due, in part, to its plywood and balsa construction that results in an exceptionally smooth exterior surface.

For a number of years, I deliberated between the Mosquito, the Westland Whirlwind, and the Bristol Beaufighter as to which I would model. Each of them suffered from the common problem of having a very short nose moment which would make them tough to build with a reasonable center of gravity location. I finally settled on the Mosquito as the best of the bunch, influenced in part by the fact that only one RC Mosquito had been published. After I finished the model, two Mosquitos showed up at the Scale World Championships!

Despite the obvious appearance of being intrinsically tail heavy, I was really shocked when my model came out somewhat nose heavy. Upon closer checking, I found that the moments aren't much different than the usual sport model.

For a number of years, my flying buddy, the late Owen Kampen, had been chiding me about publishing models that are exact scale except for cheating here and there to get my kind of model. This time I decided to build an exact scale model, and the present one is at a scale of one inch to the foot for a 54 in wingspan.

I started from the excellent drawings that appeared in the December 1966 issue of Aeromodeller. During construction, however, I couldn't find any scale spinners and had to settle for some CB Associates units. They were deeper than scale, so I had to cut out about 3/8 in of the nacelle so that the fronts of the spinners were in the correct position (there went my exact scale!). The plans show both the scale spinner and nacelle as well as the shortened version.

Every time I publish a twin-engined model, I get phone calls from modelers asking about using bigger engines. Each time I explain that there is a balance between the overall size, wing area, weight, and engine displacement that was used as the basis for the design. If I had wanted bigger engines, I would have designed the model for them. The callers never seem to be convinced, and I'm sure there are some overpowered 'bombs' out there that should have been docile sport models. Anyway, I designed this model for OS Max .10FSR engines, and it flies perfectly at a weight of 4-1/2 pounds.

Construction. While not difficult, the Mosquito must be built in the proper order. Since this model is not for a beginner, I will not give a step-by-step account but will highlight some of the major things that must be done in proper sequence, as well as, some of the innovations.

Wing. You must begin here. Construction is conventional. Build the basic panels, and install the nylon tubing for the motor con-trols (Sullivan 507 GRC-3) and the ailerons (Hobby Lobby HLH 805). Be sure to bring the motor control tubes out the bottom of the wing at the leading edge. Note that the right control tube is on the inside of the nacelle while the left one is on the outside.

Butt-glue the wing panels together with the proper dihedral (2 in at Rib 12 of each wing). Use a razor saw to cut a 1/32-in slot through Ribs 1-5 behind the spruce spars. Put plenty of glue in the slots, and slip the 1/32 plywood dihedral brace in place..." 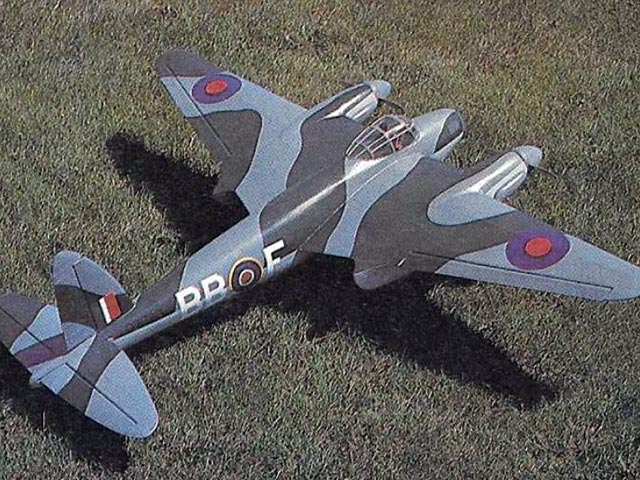