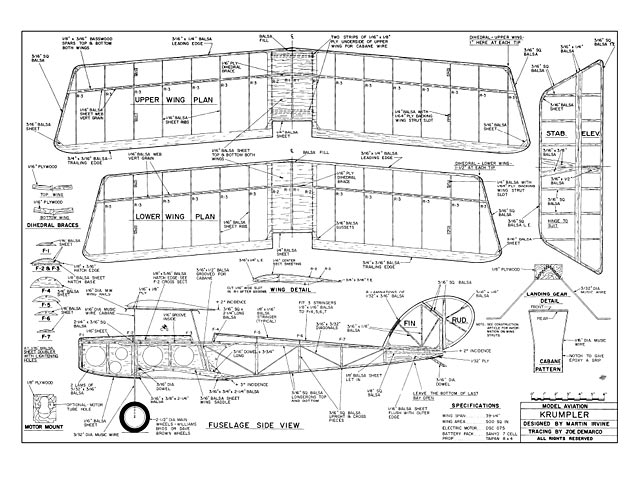 Quote:- "This electric-powered biplane looks like it might actually have been a post-WWI fullscale plane or an early homebuilt - but its not. It's an entirely original design. Build it for a lot of easy sport flying.

TWO WEEKS before the 10th Annual KRC Electric Fun Fly I found myself needing a new airplane. I love WW I biplanes but, of course, 'everyone knows' that Electric bipes require too much power to overcome their drag to be truly practical. (They obviously have never seen Keith Shaw's 60-size Stearman.) I decided that, if I kept the fuselage fairly small and the number of struts to a minimum, it should be OK - a nice slow flier. What I banged together in those two weeks is what you see here.

I test flew it as the sun was going down on Friday September 15, 11 hours before I was to leave for the KRC meet. I'd like to say it flew right off the board (as so many designers do), but I have to admit that it required three-fourths of Right rudder and two clicks of Up elevator trim before it flew straight. Big deal!

I thought that the amount of rudder required is because of a lack of right thrust in the motor. Small bipes often require side-and down-thrust, but in my haste I forgot the side-thrust. I tried it on the model, but it still required some right trim. I can't see any warps in it, but anyway I don't mind the small amount of trim.

The down-thrust is built in by way of the wing incidence, (+2-1/2° and +3° in the top and bottom wings, respectively), and the stabilizer incidence (+2°). This causes the airplane to fly at a slight downward angle; effectively giving down-thrust.

I flew a number of flights at the KRC meet, (a terrific weekend that anyone interested in Electrics should attend at least once) and got requests for plans from five people. This made me think that it might have a wider appeal, so this article is the result.

The specification table will tell you most of what you might want to know about the Krumpler, but there are just a couple of additional notes needed.

I first used a DSC 075 motor which is sim-ilar to most of the 075/550-size motors in the current generation of 'complete kit' Electric trainers and sport planes. The battery pack was a Sanyo seven-cell 900SCR pack, and the prop used was a Taipan 8 x 4. With this combination the motor draws 19 amps, which calculates to a total power input of 130 watts. I think the airplane needs the seven-cell pack if you use the 550-type motor and you want reliable takeoffs on
grass. Although they can be done with six cells, it is marginal and not much fun.

Then I remotored it with a Great Planes Goldfire motor, which has much more poop than the usual 550, but of course at the ex-pense of a much higher current (over 30 amps). My current-limiting STW speed controller wouldn't let more than 26 amps get through, so flight times were short but not absurd. Then I tried the Futaba MCR 4A receiver with great success and was able to use the six-cell packs.

But I am getting ahead of myself. Let's build it first.

Construction: Wings: I make a plywood master rib and cut all my ribs with a sharp No.11 blade. For the center section ribs, just trim 1/16 off their top and bottom surfaces. Decide what size spars you want, and make the spar cut-outs to suit. I used 1/8 x 3/16 basswood spars - a rather uncommon size - so you might use 1/8 x 1/4 bass or spruce. Don't use balsa spars! They won't be as strong, and the weight saving would be negligible.

Use medium weight, straight-grained balsa for the rest of the wing. The dihedral brace is ply and goes between the spars, as does the shear webbing. Don't leave this webbing out. It weighs little but adds a lot of strength.

You can build either the top or the lower wing first. It will be constructed one panel at a time. Start by laying down the lower spar and the trailing edge. Place the ribs in position, (angling the root rib a bit for dihedral), and add the top spar dry (ie, no glue). Eyeball everything to assure it is straight, and then use thin CyA to glue things solid. Add the leading edge, being careful to shim it up so that it is lined up with the top and bottom of the ribs..." 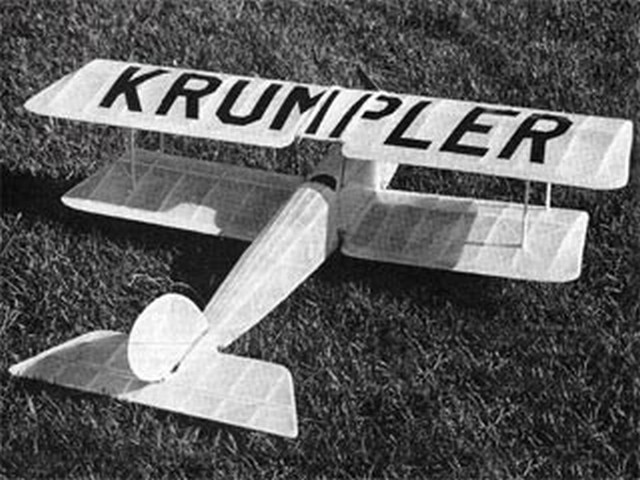