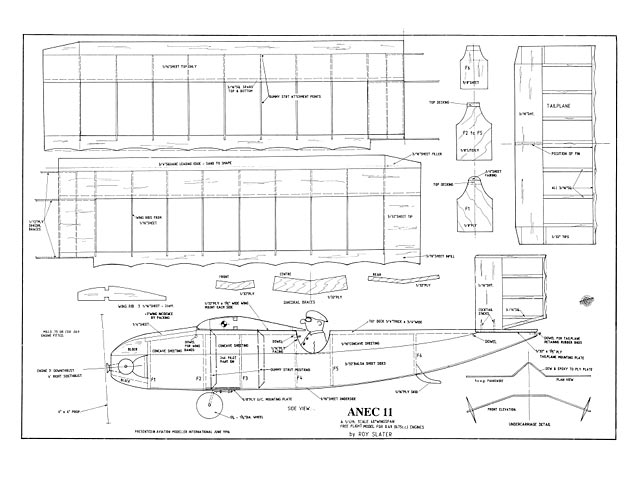 Quote: "Having recently specialised in large models, after 40 years of aeromodelling, I was looking for something different. On a miserable winter's evening thoughts returned to Cosford, Duxford and Old Warden when, after a day's flying, evenings were spent eating and drinking. First signs of obesity after various Christmas lunches and thoughts turned to possible exercise!

In the 50's and early 60's free flight with A2 gliders and rubber powered duration models kept. body weight within bounds so let's solve the present problems in two ways. First, by participating in evening free flight contests at LMA events, by flying a scale model of a large model. Secondly, if it flew well then self-retrieving, not delegating this task, would be necessary.

In 1993 I designed, built and flew a 1/3rd scale ANEC I of 12ft wing-span, looking very small against the Mal Gittins/Paul Heckles' late magnificent Halifax at Cosford.

The next stage of natural progression was to an ANEC II at 1/2 scale, 19 ft wing-span, weight over 20 kg and powered by a 3W 120cc twin. Now in the opposite direction this free flight model is 39 in span and powered by 0.49 size engine!

ANEC stands for the Addlestone Surrey works of AIR NAVIGATION ENGINEERING COMPANY who, after building Bleriots and Spads under contract in World War I, turned to design and construction of only four of their own aeroplanes. The ANEC I was designed and build for the 1923 Daily Mail Lympne trials where it excelled, winning prizes for the greatest distance flown on one gallon of petrol (87.5 miles) and reached a staggering 14,400 ft height. It narrowly missed the prize of the fastest aeroplane being less than 2 mph slower than the winner.

With considerable confidence they then entered the 1924 competition. Construction of the ANEC II was similar to that of the earlier single seater. The fuselage was much the same although changes were made to give the pilots better forward view. This was achieved by making the fuselage decking narrower and by making the nose decking concave. The crew practically sat on the floor; their eye level just below the wing.

The wings were built on two spars of box section and were covered with 3-ply back to the rear spar on the underside and the front spar on the top.

The tailplane was fixed and of narrow chord, hinged to it was a much larger one-piece elevator. Above this was mounted a tall rectangular fin an even larger rectangular rudder, the simple undercarriage consisted of a bent steel tube that passed across the fuselage projecting on each side.

This aeroplane fared badly at the 1924 trials, it performed well with only one person up but refused to leave the ground with two, which was the whole point of the competition. Later it was discovered that one cylinder of the engine had no compression and when it was dismantled a broken valve spring was found to be the culprit.

Later; this aeroplane was registered G-EBJO and was fitted with a 32 hp Bristol Cherub engine and the performance was transformed. The last flight of this aeroplane was in 1935 and the registration was cancelled in 1937. It was then stored for many years by the Shuttleworth Collection at Old Warden, is now being restored to flying condition by Don Cashmore and will hopefully again be seen flying at Old Warden.

Over to the construction of the small free flight model.

Place the bottom spar leading edge and trailing edge on the board, add ribs followed by top spar. Finally, add top sheeting and wing tip to scale shape with slight sweep back on tip leading edge. Repeat on other wing and then join with 1/32 full depth ply joint on both spars..." 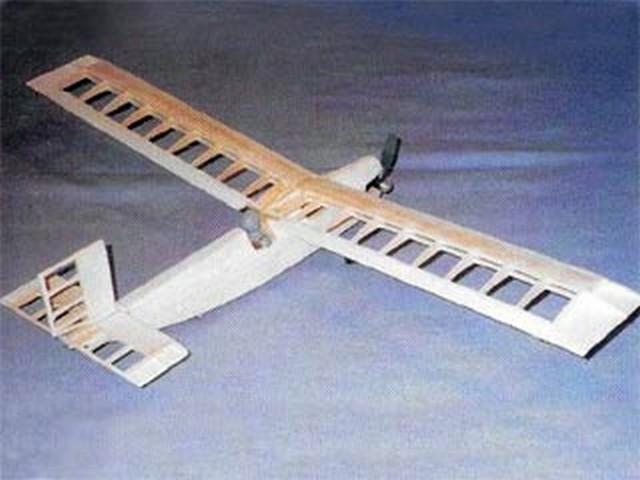