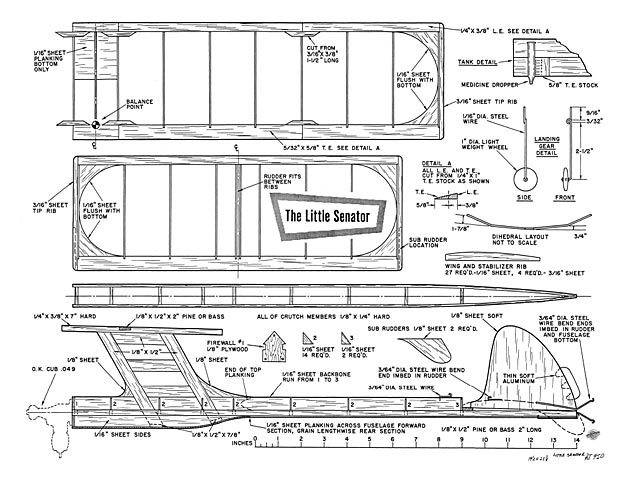 Quote: "Worthy contender for 'Half-A' honors, is this simple, high-performance free flight designed by the creator of famous Senator. The Little Senator, by Carl R Wheeley

Editor's Note: One of the most successful free flight designs presented in Air Trails was Mr Wheeley's Senator (oz8377) .29 and .30 national record holder and Plymouth Meet winner. This little gassie which follows in the same general design trend is remarkable for its simplicity and flyability. Hera is an 'A/2' job that can be built in one evening and you'll sacrifice nothing of performance because it is a speedily built job. In general, the model follows current trends in 'under-.09' competition - it has more area than the early Half-A's, it features an almost symmetrical airfoil, and its fuel tank is made from an eye-dropper.

The introduction of a Half-A Class with a top displacement limit of .05 cubic inches was one of the best things to happen in model competition for years. It has opened a new field to the fellow living in a small apartment and gives the younger boys a chance at competition.

With about $10 worth of material, an A/2 job can be built and flown for nearly six months. The inherent lightness and compactness seem to resist the damage which generally occurs when a model is a little out of adjustment. This gives the newcomer a chance to adjust his ship and make a few mistakes without having to go back to the workbench.

Although the Half-A Class has not been established long enough to tell fully what the Little Senator will do in competition, extensive test flights have shown that it really has climb and glide ability. In Tact, with a large single front main float and two smaller elevator skid floats, John I. Smith of Washington, DC now holds the Class II (Senior) A/2 ROW record using this design.

The fuselage is simple, yet strong, using the crutch type of construction. Build the crutch from 1/8 x 1/4 balsa, add the firewall (No. 1) with mounting holes drilled and motor mounting nuts securely cemented to the rear (no up, down, or side thrust), and cement the backbone down the top center crutch line (do not cut slots for pylon until you are ready to insert it). Add all formers (Nos. 2 and 3) and while drying, build the pylon framework consisting of five pieces of 1/8 x 1/2 in balsa.

Cut the backbone where indicated, when dry, insert the pylon, making sure it is centered, cement the two 1/16 sheet sides to the bottom of the crutch, and add the cross braces at the bottom of the pylon. The entire fuselage underside is now planked. Bevel backbone and crutch edges slightly from the firewall to No. 3 to receive 1/16 sheeting..." 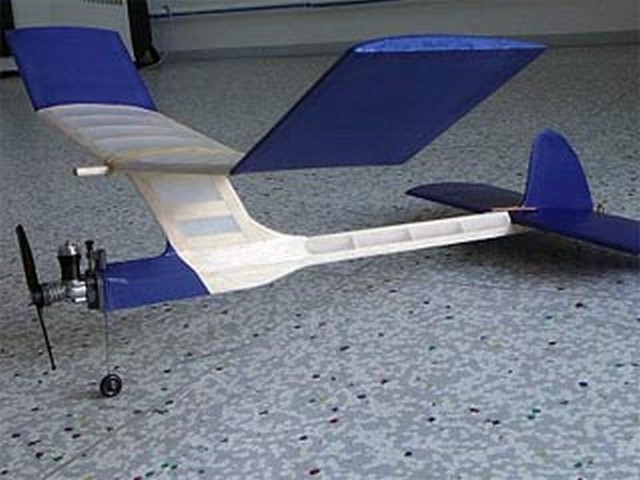 Hello again, this time I send you a photo of my finished Little senator. It is built from a plan from your site. Thank you.
janyx - 13/07/2012
Add a comment