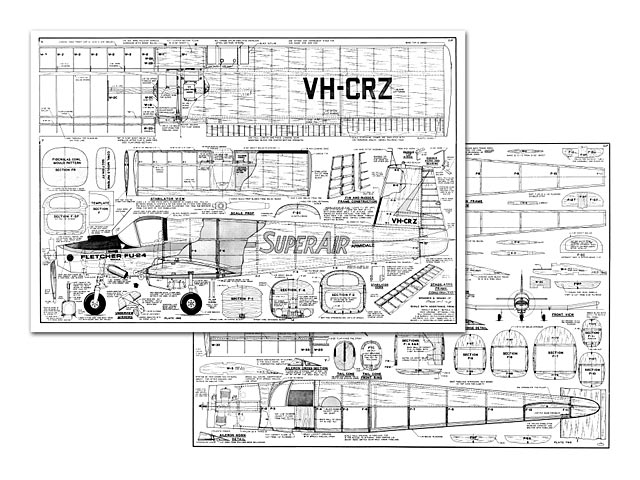 Quote: "This down-under duster has every desirable feature a scale modeler could ask for. Plenty of details can be added, structure is simple, flies like a trainer. Fletcher FU-24, by Claude McCullough.

DICK GRAHAM FIRST NOTICED the possibilities of the Fletcher for RC scale when it appeared in a spark plug ad! To find more data, he contacted the FU-24 Project Engineer for the Sargent-Fletcher Co, Gerald M Barden, who turned out to be a modeler of over 40 years standing and was glad to assist with the project. Design rights for the aircraft had been sold to Air Parts Ltd, of New Zealand, and Barden had spent some time there helping get it into production and test-flying the first 42 off the line.

Only a few drawings were still available in the US and the 'General Arrangement' unfortunately proved to be like many factory drawings of this type - very general, not really meant to be an accurate outline but more a pictorial representation. It was fine for some purposes but not for modeling. In this case, the side view did not match with the top, and Dick became discouraged with the idea of presenting this to a judge as proof of fidelity.

However, I couldn't get the Fletcher's trike gear, generous area of thick wing, and functional lines out of my head and mentioned this interest to a kindred scale enthusiast, Major Langdon Halls. In quick succession, he located FU-24's at Armidale, Australia; photographed and measured them on a bitterly cold day; drew a set of his superb 3-views (subsequently published in Australian Modeler); and supplied me with copies. With such friends, it's no wonder scale is a growing fraternity.

Since the Bremen World Champs and the first International RC Scale meet were coming up in a few months, the Fletcher looked like an ideal subject. Its non-complex lines, with no compound curves, would make for speedy building and planking. To meet. the FAI 11-lb limit, I sweat over each piece during construction, but by using restraint with the ply and epoxy and building with Sig Contest balsa wood, the ship eventually turned out just under 10 lb.

Its slim nose proved an ideal test bed for Ben Shereshaw's experimental 60 twin-cylinder engine, now going into production. The Bantam lays to rest old theories that said a twin wouldn't have good power or idle. It pulls a big model around with ease. As for idle, at Bremen I hadn't had time to install brakes but was able to come to a complete stop without them for proto taxi. The Fletcher also made the only touch and go of the meet. Scale has long needed a twin but this engine also should find plenty of use elsewhere, since the vibration level won't shake radio equipment apart. Use of a standard 60 in the model will require extending the head through the cowl, side-mounted or inverted.

The all-moving stabilator of the Fletcher was eyed with a little tredpidation, since some attempts to use these on RC jobs haven't worked out well. However, in this design the control response proved just about right, without any deviation from scale or resorting to servo movement reducing gimmicks. Luckily the plane has a deep enough fuselage under the tail to get in a sufficiently long control horn (make it as long as is possible). Also keep in mind that an adjustment of the clevis has a much greater effect than in a conventional stab-elevator setup. After the last test flight at Frankfurt before the Bremen contest, we applied a little too much correction for a slight nose down tendency and overdid it, causing some trim problems during official flying. (Some time after the International meet, it was discovered that the computer goofed and the Fletcher should have been placed sixth instead of seventh as announced.)

Construction: The only readily available published information on the Fletcher appeared in the May 1962 Flying Magazine. It features a pilot report and history on the aircraft, along with photos of the utility version which is equipped with windows and seats for passengers. This would be an interesting modification of the basic model for those who don't want to get into the functional detail of the duster.

Don Halls has loaned me the negatives of his fine pictures in color and black and white and I'll undertake supplying copies at cost. Send a self-addressed, stamped envelope to Claude McCullough, Rural Route 5, Ottumwa, Iowa 52501, for complete information. There is no substitute for having photos of the prototype for accurate details and this set of shots shows closeups of the landing gear, cockpit, cowl, dust box, etc., as well as views of the complete airplane.

Sig will assist in duplicating the model by providing the big canopy and some small moldings for lights and scoops. Cost is $3.25 plus 50 cents postage. Mark the item: 'Attention: Maxey Hester.'

Most of the necessary construction information is on the plan. The only unusual area is the nose section which requires some ingenuity to get everything shoe-horned in and still leave some structure. A complete cockpit with reasonably thin walls also must be accommodated. The design worked out well, as shown, but care must be taken to join solidly all joints between the ply and balsa sandwich which forms the sides of the nose and the rest of the fuselage. All the corners in this area should be reinforced with epoxied spruce angles.

Do not omit the cockpit floor since the channel strength formed by the sides and bottom is necessary to keep the structural integrity. Note particularly that F-1 is not attached until after the landing gear, tanks, rear cowl attachment blocks and exhaust augmenter tubes are installed.

One part of the nose construction not shown on the plans depends on the engine being used. Where the mounting bolts for the motor or motor mounts go through the firewall F-1, put a full length 1/8 x 3/8 ply doubler on the rear side. Two pieces of 1/8 ply are then hand-fitted into the area between F-1 and F-2, one end in the corner formed by a side of the mounting bolt doublers and the other end epoxied against F-2 in the area between the tank holes. (See photo of nose with cowling off.) The depth of these pieces is determined by the available space. With the Bantam, one side was full depth, the other only partial because the thrust angle puts one tank in the way. The final result is very strong..."

Steve & Mary - Here's Claude McCullough's 74in span Fletcher FU-24 from September 1971 American Aircraft Modeler. Very nicely done model powered by a 2-cylinder horizontally-opposed .60. It looks like he designed it to be a Sig kit, but I don't remember them picking it up. 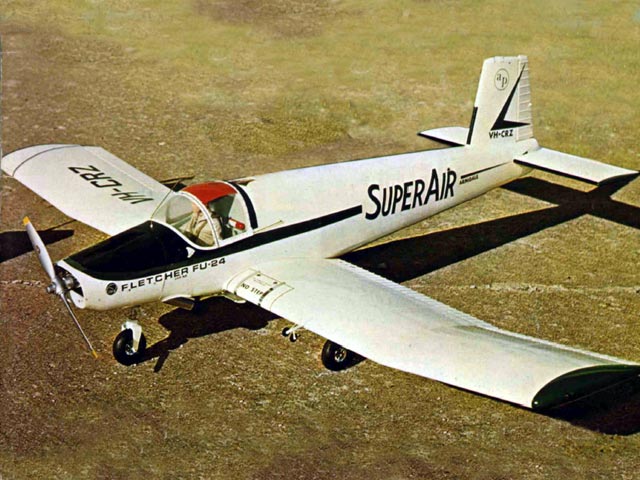