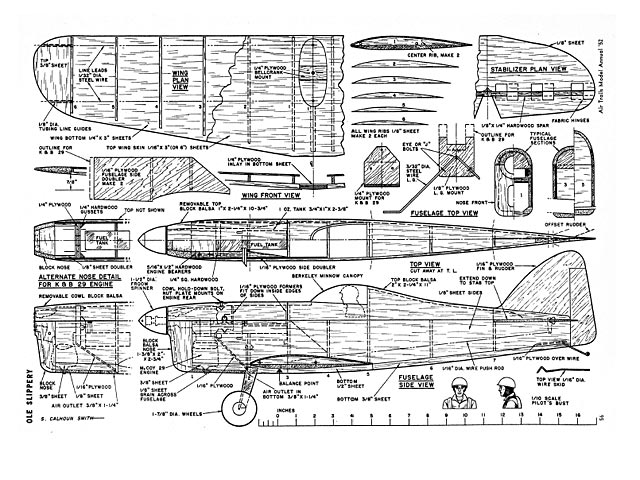 Quote: "Ole Slippery was conceived a while back when team racing was first starting. It originated in an illustration in Air Trails. The gap between picture and model has been filled in with considerable time watching and flying in team races. We don't claim Ole Slippery to be the final word, but rather an incorporation of pet design ideas.

Construction is conventional and has proved rugged and light. AMA rules governing fuselage size are complied with. Button-head, the pilot, is close to size. Wing area is 140 sq in, considerably greater than the 125 sq in minimum. The lifting airfoil (zip-zip section) is thicker than ordinarily used. The reduction in wing loading is a definite aid to acceler-ation and helps the model get air borne more quickly. It is doubtful that the slightly increased drag of this type of wing offsets its advantages.

Weight is 23 oz. This figure could probably be reduced by using medium grade balsa, rather than the heavier, hard grade used in the original model. However, don't employ such soft wood that overall strength suffers.

Construction may be started with the fuselage. As can be seen from the drawings this will vary slightly depending on the engine used. The K&B .29 is mounted radially on a piece of 1/4 in hardwood plywood. The McCoy .29 is beam-mounted on 5/16 x 1/2 in hardwood bearers. Before starting construction, study the plans for differences in structure for the particular engine you with to install.

Cut out the 1/16 in plywood fuselage side doublers and the hardwood engine bearers. These should be joined with Weldwood glue. Put a couple of small wood screws through the plywood into the bearers for a tight joint. Cut out the 1/2 in sheet fuselage sides and glue the plywood doublers to the front portion..."

Article, thanks to Mary from https://rclibrary.co.uk/title_details.asp?ID=2132 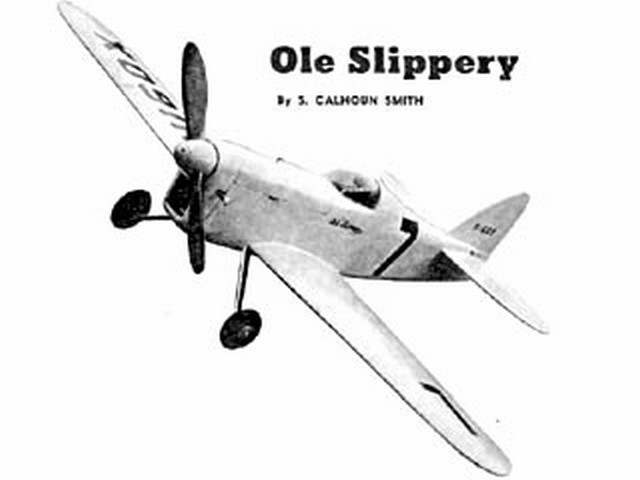