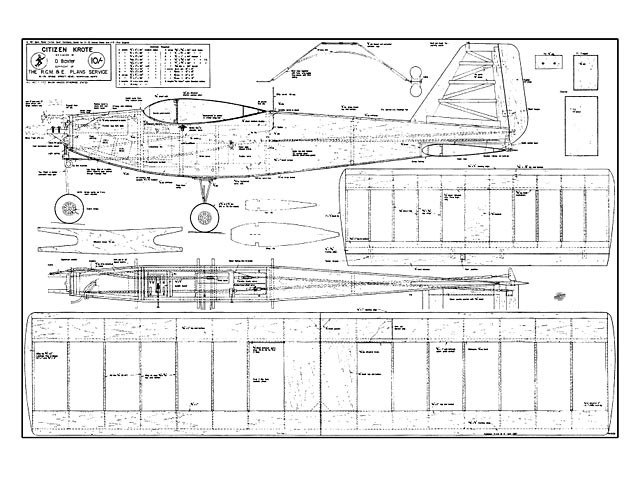 Quote: "A rugged 49in span intermediate multimodel for sports flying.

AFTER forty flights now, Citizen Krote is still performing well, and has more than lived up to expectations.

The need for a new model to try out my Citizen-Ship proportional gear led to the basic conception of the machine. I wanted something straight-forward, light and with reasonably clean lines. The family of 'Krotes' have, hitherto, all been 'heavies', and I had already experienced too many downfalls with flying fast, heavy, overloaded and overpowered machines. So this one had to be different. It's suprising just how different it is to build light after years of hairy monsters!

I had always been a fan of the late PE Norman and admired his original approach to rugged designs, albeit a bit on the heavy side for my liking, and I have often marvelled at the ultra light-weights of Mick Farthing, somewhere there had to be a balance. Attention was given therefore to weights, and a Krote of 3-1/2 lb was evolved, not burdensome for a 490 sq im wing.

The next important factor to consider was the wings section. I have used numerous sections and decided on a fully symmetrical section, very thick. This was to attain a reasonably slow flying speed with good penetration qualities.

The first time the machine was flown was at last years' South Midland Area picnic at RAF Upwood. This was my first attempt at proportional flying, and needless to say, I was a bit apprehensive, so I took along my good old faithful reed job in the wagon, just in case.

I decided to go mad and try the new Krote out first. Conditions were ideal, hardly any wind and not many hods about. The Oliver Tiger motor started easily and I adjusted the speed for a fast tick-over. I then taxied across the runway, trying out the steering and brakes, all systems go! Taking my courage in both hands I turned her into what wind there was and open up. The model lunged forward, and apart from very slight correction, ran very straight. She travelled for about fifty to sixty feet, and then I started gently easing the stick back. The nose came up and almost immediately she unstuck, proceeding into a steady climb to the left. Slight right trim was applied and flying continued. I flew the remains of the tank out and landed okay.

I was then conned into partaking in the spot-landing contest, and although I didn't come anywhere near the spot, at least I took the model home in one piece and Citizen Krote had survived its first contest! Three flights on the clock now and the next outing was a spot landing event at our local Croxley Moor flying field. The opposing team did not show up, so all we had to do was to fly..." 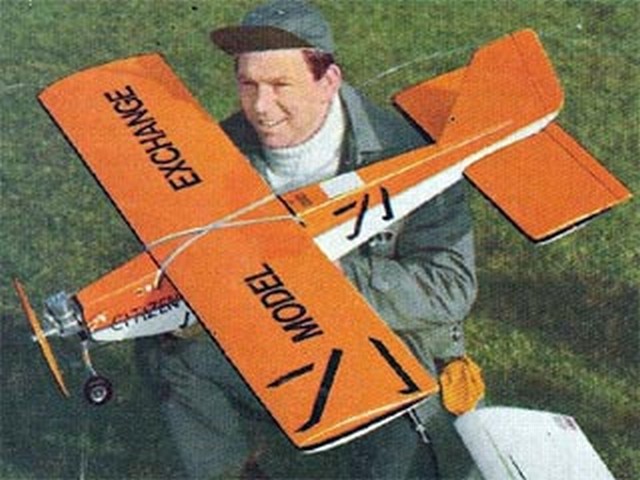