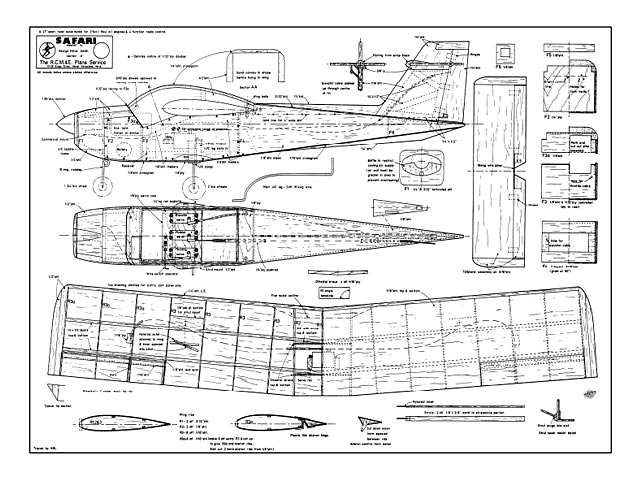 Quote: "The Saab MFI-15 Safari (or Supporter if you like military colour schemes) has developed over the course of nearly twenty years from the Bolkow Junior. Designer Borg Andreasson went for simplicity of manufacture, avoiding complex curves but still producing an aircraft of undeniable character. I have tried to do the same with my model.

The Aircraft. The Safari has rarely attracted much attention outside flying circles. But it can claim one brief moment of glory, in a development form known as the MFI-9 Junior it made the world's headlines during the 1969 Biafran war. Six Swedish pilots led by the late Count Gustav von Rosen carried out a series of daring low level attacks against Nigerian airfields. Skilfully exploiting the element of surprise the tiny 130 mph MFI-9's caused havoc among the jet fighters on the ground and then vanished back into the jungle.

The military lessons learnt from these tactics helped in the development of the Supporter which can carry rockets or bombs or missiles and has gone into service with the Pakistan and the Danish airforces.

My own introduction to the Saab Supporter came during a very wet filming session at the 1974 Farnborough Air Show. Having dashed for shelter under the large delta wing of the all-weather Saab Viggen complete with tripods, cameras and a muttering camera man, we discovered that for some reason the Viggen's wing is full of little holes rhich let the rain drain through. And besides which the height of the wing forced us to bend double so that the rain could run straight down inside one's collar. When the next downpour interrupted filming I headed for a more dignified shelter which happened to be the Supporter. Well, to cut a long story short I stayed dry and got a good chance to study it in close up. From then on I've been hooked on Saab's little milit-ary trainer.

The technical problems of the large cockpit and the high tail seemed (at the time) to make it unsuitable as a radio model, but I came across some pilot notes on flying and performance of the MFI-15 and they were so full ofpraise that I knew that I had to build a model somehow. By the time Farnborough 1976 had come around I'd a basic plan and a lot of good intentions. After another good look at the parked Supporter, now in the colours of the Royal Danish Air Force, and a short chat with the Saab-Scania sales staff my mind was made up. My wife hardly saw me for the next few weeks, but a month after Farnborough my model of the Supporter first flew. And it's been flying ever since.

The Model. The basic outline of the model is to scale except for two changes which hardly show. The wing root leading edge cut out has been omitted on the plan as with my first model. I did in fact put it in on the next one, but as you can see in the photos, it's difficult to judge whether it's there or not, and so not worth the constructional hassle it causes. The other deviation from scale is an increase in tailplane area by about 15 per cent.

Construction. Fuselage. Each side is made from one sheet of 1/8 in x 4 in medium balsa. Butt join the extra piece needed (with Zap or equivalent) before cutting out the shape. Then laminate with 1 mm ply from front to F4. Don't forget that there's a right hand and a left hand side! Try to build in the curve at the front (see fuselage top plan) at this stage as this cuts down internal stresses where the fuselage takes most knocks..." 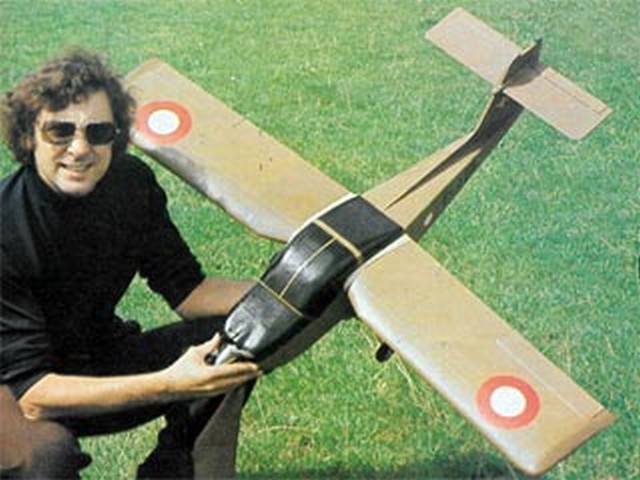