Quote: "A simple to build 12th scale model of a pre-war ultra-light for .5 - .75 cc engines, which includes pendulum control to the rudder and ailerons to aid stability.

WHILE LOOKING for a scale model suitable for flying in a small field, I discovered the range of delightful light aircraft designed for the Air Ministry Trials held at Lympne between 1924 and 1926 and decided to build the MkII version of the Supermarine Sparrow.

This was the first design by RJH Mitchell who later became famous for a range of air-craft he designed for Supermarine culminating in the Spitfire.

For model work, the Sparrow offered a considerable challenge in trimming, due to the lack of dihedral, so it was necessary to fit a pendulum control system. Pendulum control was developed to a fine art by the late PE Norman during the '50s. He was able to make pendulum controlled free flight models perform considerable aerobatic feats, but in our case, we are using the pendulum just as a stabilizing device.

The Sparrow flies well, but is essentially a calm weather model - just the thing for a warm summer evening - aeromodelling at its most enjoyable in fact.

Construction. Fuselage. Cut the fuselage sides from 1/16 in sheet medium soft balsa and also formers 4 to 9. Former 1 is from 1/8 ply and F2 and F3 from 1/8 in medium balsa. Start by marking the positions of the formers on the inside surface of the fuselage sides. A fibre tip pen is ideal for this job. The next step is to glue F3 and F5 to one side of the fuselage, making sure these formers are square. An old set square with the corner cut away to clear the cement joint is the best tool for the job.

Next, glue former F4 to the other side of the fuselage, allow a good half hour for the formers to set and then join both sides together. Lay the centre top edge of the fuselage onto a flat surface to ensure that both sides are parallel. Fix all the other farmers in place making sure that the engine bearers have 30 side thrust and 3° down thrust.

Bind the undercarriage to a piece of scrap 1/2 in sheet and cement well to the fuselage. Glue the wing struts to formers 2, 3 and 4a and use balsa cement or a small amount of epoxy. Now sheet in the bottom of the fuse-lage with the grain going across the width of the fuselage. The tail skid can now be glued in place..." 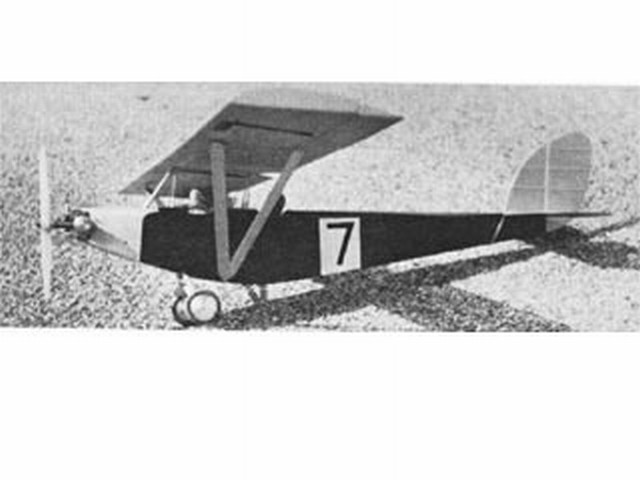