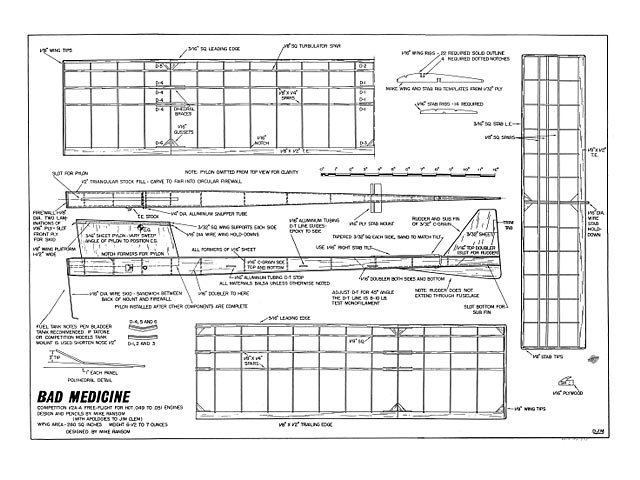 Quote: "1/2A or A, two events with the simple switch of an engine. A scorching climband a soaring glide. Contests are ahead! Bad Medicine, by Mike Ransom.

Once the last fall contest is over and a whole season's castor-oil is mopped up off of wings, stabilizers, and the living room carpet, every Free Flighter looks forward to the halcyon days of winter - days spent in recuperation, re-building, and explaining the castor-oil in the carpet to the lady of the house.

Time spent with a tall, cool one in hand, leaning back watching the NFL and con-templating next year's building project is not really time wasted. Its a solace to the soul - a necessary spiritual aspirin for knotted nerves - a mental medicinal to pre-pare you for the winter's onslaught of clouds of balsa dust and curing dope fumes that is sure to come.

Such medicinal musings provided Mike Ransom an opportunity for diagnosis, and just as surely a cure for contest anxieties in the form of 'Bad Medicine,' a 1/2A screamer that's certain to give observers a crick in the neck from following its power pattern.

Compounding the Prescription: Carrying just 280 squares, Bad Medicine tippy-toes a fine line between optimum climb and acceptable glide, offering the best of both worlds. The plane was developed by Mike early in the '74 contest season, originally intended to be a back-up ship for this year's Nats. However, its performance capabilities quickly made it Mike's number one tourniquet for shutting off the competition.

Beginning with the airfoil from Jim Clem's 'Medicine Man' (Feb '74 FM) Mike felt a personal commitment to his past experience with pylon/rear fin con-figuration, due to seemingly superior glide characteristics. A very light tapered-box fuselage with an interesting pylon installation was filled with one of Dale Kirn's jewel-like .049's by Cox. A careful compounding of other components such as a pen-bladder pressure system and an all-up weight of (5.5 oz allowed Bad Medicine to offer potential headaches to 1/2A opponents during the past season.

Active Ingredients: Bad Medicine's tapered-box fuselage, used successfully on planes such as the Ramrod (oz6344) and its many relatives, offers a decided weight and structural advantage. It's not really any more difficult to build than the slab-sided Starduster (oz2098) variety. It just employs some different techniques. The fuselage is built inverted on the building board..." 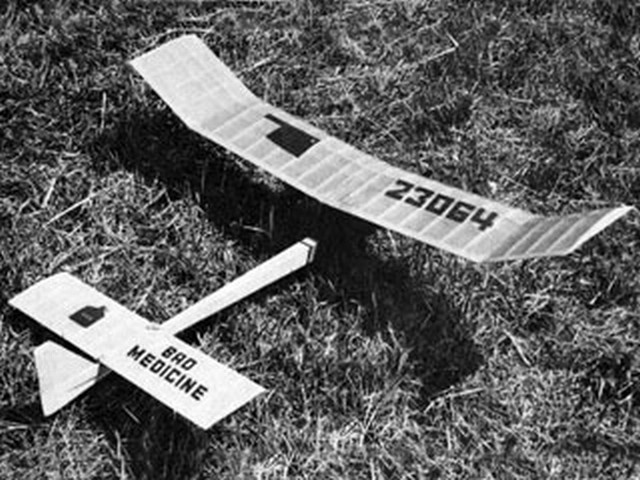