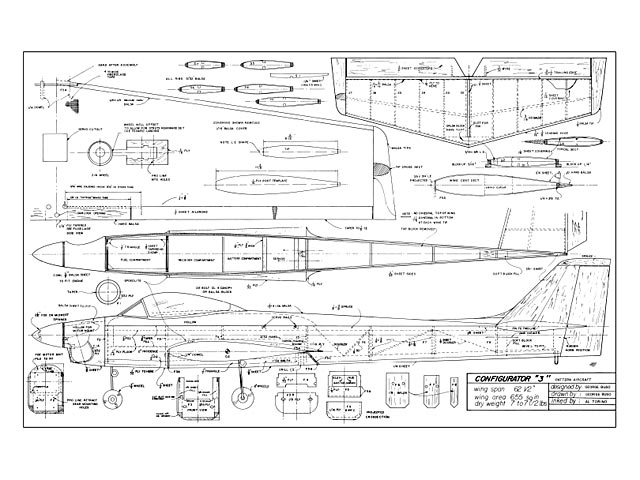 Quote: "A direct descendant of the A-6 Intruder, this model perpetuates the exacting standards of excellence in pattern design which the late Jim Kirkland held so highly. Configurator III, by George Buso.

One direct and extremely influential ancestor of the Configurator is the late Jim Kirkland's Intruder design. After two years of modification and experiments, the Configurator still strongly resembles the Intruder, especially in the top or planform view. However, the Configurator employs many important changes that make it an even more forgiving and stable aircraft, with no negative tendencies whatsoever.

A new name was most certainly warranted after several modifications gradually evolved for the airfoil, thrust line, rudder and fin shape, fuselage width, and the wing and fuselage construction. The airplane has been changed considerably over a two-year period, hence, the new name - Configurator III (it performs a prescribed configuration of maneuvers). This third generation model has now been endowed with more desirable flying features, which make it perform, with confidence at full throttle and also at lower approach and stall speeds.

In March 1973 the airplane placed first in the Pattern Aircraft category at the Eastern WRAMS Show where the entries were judged for original design, as well as for overall construction and finish. By the end of April, in windy, blustery weather, the Webra 61 in the Configurator had gulped down only one gallon of fuel. The only trim adjustment needed for 15 flights of various lengths (including one dead stick after about 18 minutes of air time) was a 'tweak' of left aileron.

If you are interested in a fast, steady contest flying machine that grooves as if on rails, then consider building the Configurator. Make certain that everything is square and true during construction for maximum flying enjoyment.

CONSTRUCTION: Only specific construction points, will be highlighted here. Anyone building, this aircraft will probably be familiar enough with building techniques to complete a Configurator without a great deal of detailed explanation.

Begin the wing construction by cutting out the foam wing cores, using the root and tip templates shown on the plans. A solid balsa leading edge is utilrized, which makes the foam cutting somewhat easier. Only a top and bottom outline cut is required, without the necessity of cuffing around the critical leading edge airfoil shape. The 1/16 balsa wing skins are also easier to make, because the skins do not wrap completely around the leading edge. The rearward sweep would make a one-piece wing skin much more difficult to construct and to fit correctly..." 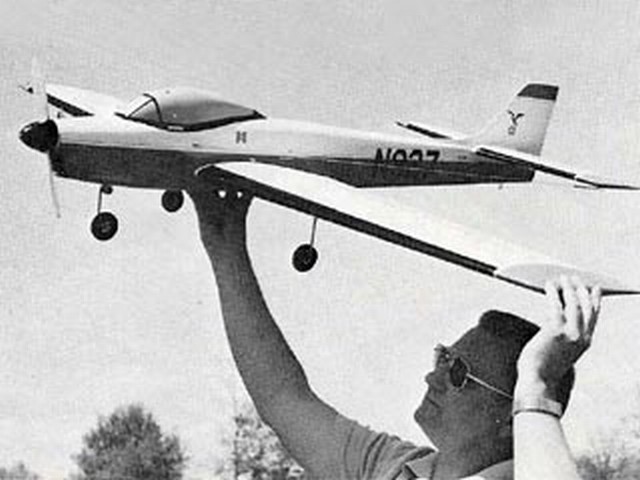