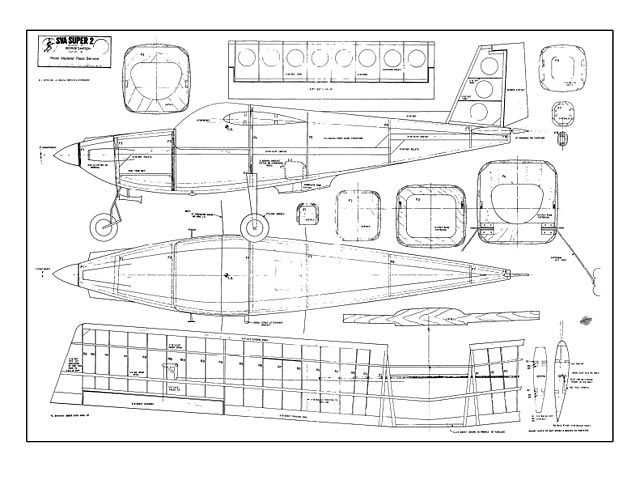 Quote: "I first saw this aircraft featured on the BBC programme 'Business Matters', and thought that it would be a suitable subject for a scale model. After writing to the manufacturers I received a rather 'sketchy' outline of the aircraft and proceeded to produce a drawing to 1/5th scale, which gave the model a wingspan of 68-1/2 in and a weight of 6lb, producing a wing loading of 32 oz / square foot.

Getting cracking: Construction is pretty well straightforward, but as the fuselage formers are assembled onto the crutch 'in the hand', care must be taken to ensure that these components are true and in alignment. Cut out former F4, cut slots for the insertions of the ducal u/cart legs, bolt on to the former the 1/2 in x 1/2 in aluminium angle and bolt on to this the u/c legs and wing strut mounts.

Having cut out the formers and glued the balsa doublers onto formers F3 and F4 in the cockpit area, assemble onto the crutch and just tack with cyano glue. Use rubber bands. etc. to pull the crutch sides together on to the formers, check for square and alignment and finally glue permanently into place. Cut 1/4 in balsa sheet sides, slightly oversize, and glue to the edges of the formers. Next fit the fuel bay floor and fuel tank. Cut top decking. again slightly oversize and, glue into place. Cut bottom sheet oversize. make saw nicks across the grain where the sheet has to bend around the bottom of the fuselage and again glue into place.

Next trim all the sheeting down to the 45 degree corners of the formers, and again fill in with 1/4 sheet_ These in turn can now be planed down flush with the main sheeting and the final shape planed and sanded to shape.

The engine mount can now be screwed onto the 3/8 ply firewall, the engine temporarily fitted, and the cowl made up with sheet balsa. There will be a certain amount of carving within the cowl to fit around the engine as the nose arrows quite appreciably. Formers F1 can now he glued into place and the cowl assembly carved and sanded to shape.

Tail bits: Tailplane and fin are both straightforward construction on a sheet core, glued into place and fillets made up with soft block. Receiver, servos and control runs can now be fitted and the cabin details constructed. The seats are carved from 'blue foam' and covered in stretch material. The seat belts are simply boot laces with shim aluminium buckles..." 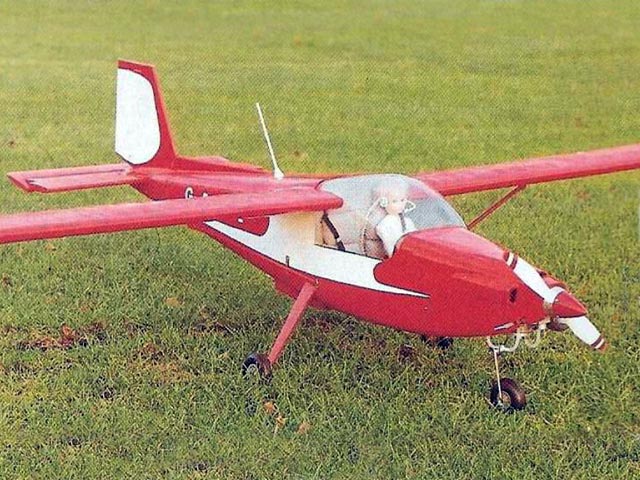