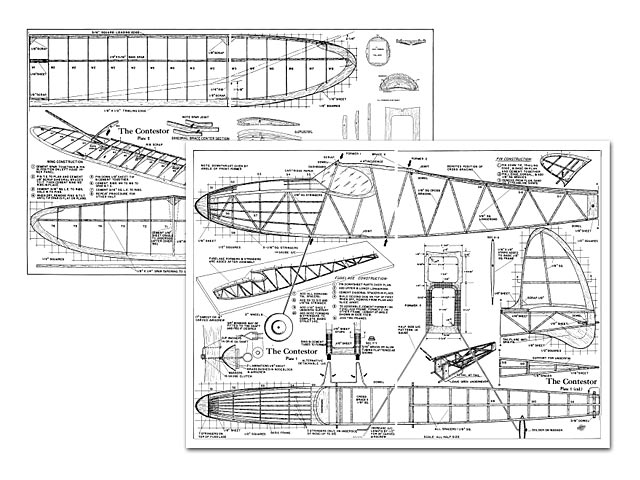 The original KK Contestor (oz4448) plan and kit date from 1946. This is the Contestor plan as it appeared in Flying Models in Oct 1948.

Quote: "Flying Models is pleased to present this Wakefield model by one of Great Britain's outstanding designers, featuring a novel method of fuselage construction. Plans of this model are published by permission of Keilkraft Kits and copyright 1948 by E Keil and Co Ltd.

An advanced Wakefield design of semi-scale appearance, the Contestor is capable of flights of three to four minutes - in still air. Several new building methods have been developed to both simplify and ensure accurate assembly. The original was shown at the 1946 National Model Aircraft Exhibition in London, gaining third prize in the Wakefield class.

BUILDING THE FUSELAGE: The essential features of the fuselage construction are sheet nose longerons to prevent distortion at the nose, 'W' bracing to eliminate power twist, and assembly formers to ensure a dead square section.

The sheet longerons that outline the nose and cabin, are pinned down over the side view of the fuselage and the 1/8 square longerons joined to them. Build the second side over the first and separate with a razor blade when dry. Bind and cement the u/c (under carriage, landing gear) to former 1 before joining the two sides by means of formers 1 and 2. Taper the insides of the sheet rear post and join at the tail end. Pull in at the nose and cement in the sheet cross brace nose supports followed by the upper and lower spacers.

Add the nose formers (S1 to S7), nose stringers and upper stringer, in that order. Cartridge (Bond) paper is used to cover between S5 and the dashboard. Make a pattern for the windshield and then cement the celluloid windshield in place. Only the rear peg reinforcements, and the wing and tailplane (tail surface) dowels remain to be fitted.

BUILDING THE NOSE-BLOCK AND AIRSCREW (Propeller): Lightly cement the nose block to S1 and carve to the approximate shape, finishing off with fine sandpaper. Cut away again and cement the 1/8 sheet plug to the rear face - then screw the bushing in at right angles. The freewheeling device is conventional and should be started at the rear hook end.

Concentrate on drawing up an accurate air screw (propeller) block, carefully drilling the center hole. Finish off the backs com-pletely before starting to carve the fronts. Check the drawings for cross-section thickness. Cover the finished airscrew with tissue and give three coats of clear dope. A bobbin should be fitted to prevent the rubber creeping over the hook.

BUILDING THE WING: The wing has polyhedral for stability and is built in four distinct stages. Build up the main spar flat on the plan to obtain the correct dihedral angles. Thank Carl Goldberg for the neat method of joining on the tip spars. Pin the left-hand inner panel spar to the plan, blocking up with scrap sheet. Carve the trailing edge to a knife edge and pin in place. Attach the spar joiners, followed by the ribs and the leading edge. When dry, remove the pins and tilt until the tip spar is flat on the plan (support the inner panel with several books). Cement the sheet tips together and pin down..." 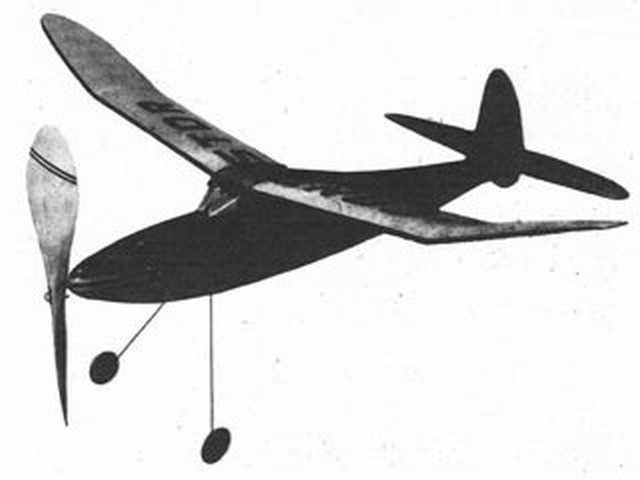