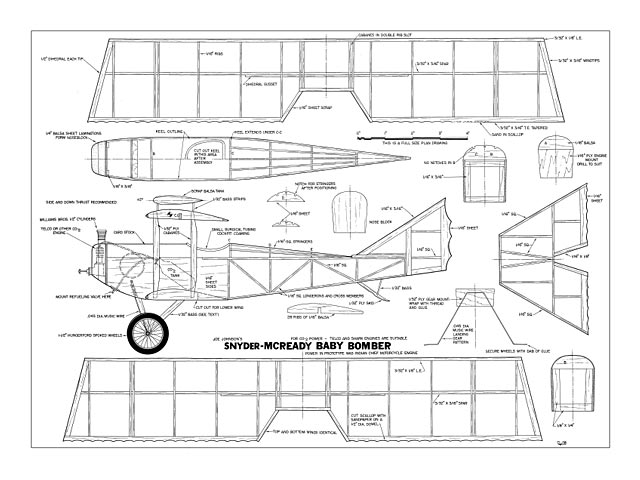 The 'Baby Bomber' was developed by 0. H. Snyder beginning in 1921. Pow-ered by a two cylinder, fifteen horsepower Indian motorcycle engine, it was one of the few practical and proven designs available to the home builder in the early 1920's. One should remember that no Federal regulatory body even existed until the 1930's to dictate the safety of design and materials used in aviation. Consequently, many homebuilt designs existed but precious few were flyable and/or safe.

The Baby Bomber spanned twenty one feet seven inches, had a three foot nine inch chord, and weighed a whopping 314 pounds empty and only 500 pounds full. Needless to say, pilot weight was critical with only 176 pounds available in useful load including fuel. A problem similar to the experience of Doug Bianchi and his Santos Dumont Demoiselle reproduction made for 'Those Magnificent Men' arose when the reproduction refused to leave the ground until someone discovered that Santos Dumont weighed only 110 pounds dripping wet! Joan Hughes, a petite lady pilot, was hired and the Demoiselle flew quite nicely as the movie demonstrated.

The use of a converted motorcycle engine was not novel to the Baby Bomber, although it was one of the few successful applications. The drive shaft was placed towards the tail, driving a reducing gear on the prop shaft which ran in journals below the engine. The normal 2500 rpm was reduced to 1200 rpm and drove a left hand prop. The Indian Chief displaced 71 cubic inches and was gravity fueled from a tank mounted over the upper wing centersection.

No information exists to my limited knowledge concerning color and markings. The photo in 'The Lightplane Since 1909' appears to reproduce a dark fuselage color, lighter wings, and a silver or white engine area. The number '39' on the fuselage sides are shown on Gordon Coddings drawings and presumably were placed when the aircraft was entered in the 1924 Dayton Air Races. Of course no 'N' numbers were placed as no CAA existed.

I had purchased a set of 1/12th drawings from Gordon Codding many years ago with the intent to someday develop a Free-Flight Scale model from them. When Joe began considering a replacement for his much flown Farman Sport, he commented on the previously mentioned photo in 'Light-planes' and I recalled the long ignored drawings. A hasty ruler application revealed an ideally proportioned bipe for CO2 could be developed by using a 0.8 factor. As a consequence, the model is in 8/10 th inch to the foot scale, a little strange granted, but a simple scale ruler can be developed for competition use by following the instructions in the AMA rule book.

The resultant model is of considerable eye appeal, and also flies exceptionally well. Frankly, CO2 power is simply great for fun type flying. A model of this size will fit in a box from the grocery store, can be carried in the smallest of sub-compact cars, and requires only the charger in the pocket and the model in the hand. Playgrounds and even empty lots provide sufficient flying space. No one complains of noise (there isn't any) and operation is so clean one can fly in his business suit and tie if so inclined.

After watching several modelers fly these powerplants and reflecting back on my personal experiences in the early 1950's, I am convinced that these little COs powerplants are the wave of the future for fun flying. This concept is going to sweep the model world with as big a splash as Peanut Scale has. If you question my enthusiasm you simply have not tried CO2 yet. This little model is a great place for you to start, so let's build one!

General Construction Notes: All the balsa sheet used in this project is light but firm 1/16 sheet Contest grade. Basswood is available to your hobby dealer from Rev Model Products and/or model railroad suppliers. The wheel can be ordered from Peck Polymers, Box 2498, La Mesa, California 92041, Cyano Acrylate (Hot Stuff, etc) is exceptionally handy on models of this size. Never mark anything on this model with a ball point pen, the finish will only cover over light pencil marks.

The Fuselage: Make yourself a 'kit' by cutting all parts out before assembly is begun. Trace the patterns from the plan onto typing paper or tracing paper, cut out to rough size, then spray lightly with Sprayment or such. Stick onto sheet (watch grain direction) and carefully cut to correct outline. Drill holes for motor mount and tubing.

Two identical fuselage sides are built one over the other using Saran Wrap as a separator. When finished, gently poplipart with a table knife. Mark a left and right side with pencil for cabane strut reference lines. Pin fuselage keel directly over plan, position A-B and C using a triangle to assure parallelism, then Hot Stuff to place.

The two sides can now be placed and Hot Stuffed to the keel and bulkheads. Pull the tail posts together using the top view as a guide. Hot Stuff tail posts then add 1/16 sq cross members..."

Attached is my scan of the Snyder-McReady Baby Bomber from Flying Models magazine issue 08-78. 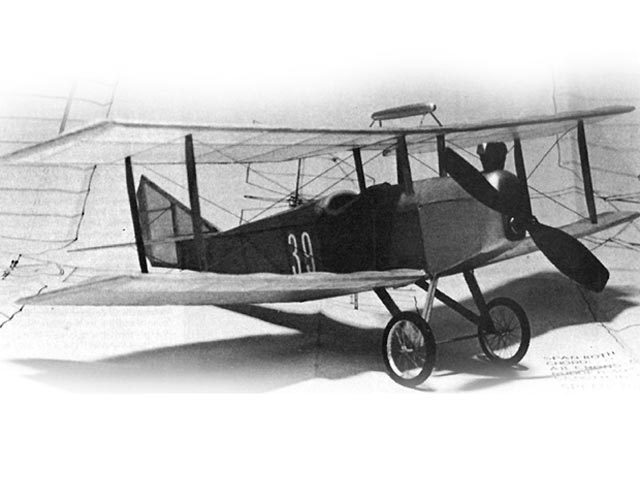