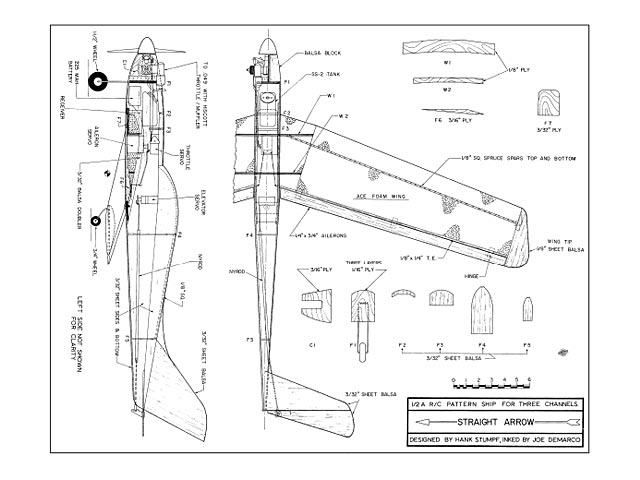 Quote: "Tired of look-alike 1/2A aerobatic jobs? Grouchy over the cost of everything? With neutral stability, this exotic 24 oz, 3-channel bird performs advanced maneouvers with unusual precision - and gets 15 to 20 minutes on a 2oz tank. But it's not for the beginning pilot.

Combining a swept-back wing and tail, and adding a throttle-equipped engine and tripod gear. Straight Arrow is, in Hank's eyes, a second generation of 1/2A stunters. We'll buy that!

WHEN the Ace Pacer (oz7186) was introduced, it revolutionized 1/2A flying by providing for the first time pattern ship appearance and performance. Since then it has been imitated by numerous designs similar in appearance and capability.

The Straight Arrow is not more of the same. It is the next generation in 1/2A pattern flying, combining swept back wing and tail, tripod landing gear and throttle-equipped engine.

As you can see, in addition to sweep back, the wing has anhedral. This is required to cancel out the aerodynamic dihedral effect of the swept back wing and, incidentally, has the desirable result of making the tip-mounted wheel struts shorter. The result is a plane with neutral stability and flight characteristics similar to the Pacer.

The availability of micro miniature radio flight packs, such as the Litco Systems and Ace RC equipment, makes the three-channel setup pos-sible with a total airplane weight of only 24 ounces. If you desire, rudder and nose wheel steering could be added for one more ounce to make your Straight Arrow full-house.

Similarly, there is a group of throttles now available for Cox TD engines. In order of cost they are Hiscott, $16.95 (includes muffler), Tarno, $12.95, and the Ace Throttle Sleeve, $2.50. A Hiscott was used because it includes a muffler and noise abatement is very important in our field. This unit does reduce engine power somewhat, so if you want a throttle with almost zero power loss use the Ace Sleeve. I have also tried this unit and found a noticeable improve-ment in airplane speed and climb rate.

Wing: Foam cores are Ace part no: 13L207 wing kit, $4.75. These cores are joined at the center by two 1/8 ply carry-through spars which establish both wing sweep and anhedral angle. The constant-chord foam section must be sawed into six pieces at the correct angles to form the center section which is the heart of the wing..." 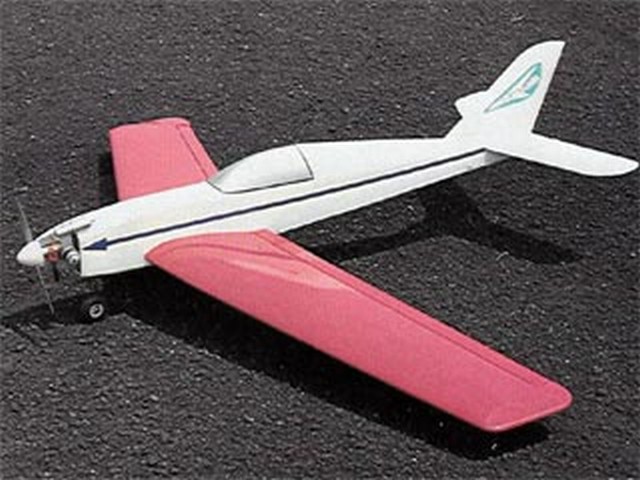