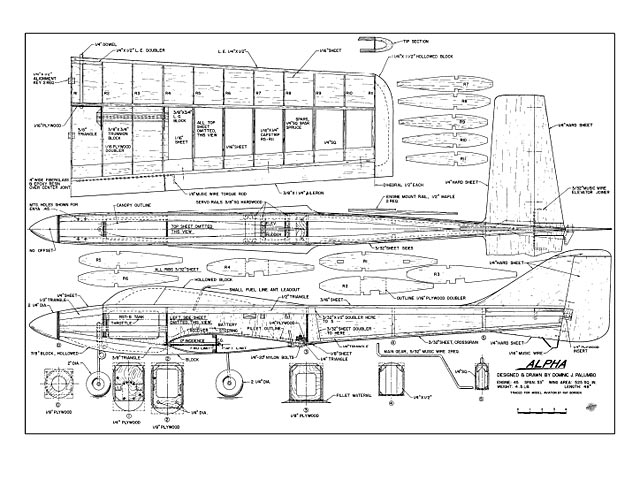 Quote: "We would be remiss not to make special note ofthis excellent design. Mr Palumbo deserves high praise for his execution of a specialized aircraft. An aeronautical engineer, he was able to gild the lily with a wing design that really does improve stability and performance. A skilled flier, he can realistically appraise his creation in the hands of others. Many prior efforts have been made in this direction in all magazines, including this one but so-called sport 40-powered aerobatic jobs for Sunday fliers usually are all too often merely smaller, standard pattern machines. We believe we can recommend this one without reservation. It appears to be right on.

IN DESIGNING Alpha my objective was to come up with an easy-to-build, racy looking airplane having full acrobatic capabilities with a standard engine and non-retractable trike gear. The primary motivation was to provide a relatively inexpensive answer for those interested in developing their skills as aerobatic fliers. Note that I said aerobatic fliers and not necessarily pattern fliers. Even though Alpha will perform all maneuvers required by the AMA Masters pattern.

I believe that there are lots of fliers who, like myself, have neither the time, nor the desire, nor the bankroll necessary to become serious contenders in pattern competition. We so-called 'sport' fliers enjoy acrobatic flying for its own sake, and in its purest form, without super-excessive power loadings or electronic switching gadgetry. So Alpha was designed to look fast, fly fast, yield snappy performance, and cost much less than your typical full-blown pattern aircraft

Evolution of the Design: Among the many factors which enter into the design of highly aerobatic aircraft, there are two which stand out as most important; namely, drag and weight. Every aircraft is a unique compromise of these very important factors, but the vertical maneuver capabilities which acrobatic aircraft must pos-sess make these two factors increasingly important.

Hence, every effort has been made to keep Alpha as light as possible while maintaining sufficiently sound structural strength to take the high Gs imposed during maneuvering. Drag has been minimized by presenting as small a frontal area as practical to the oncoming flow and stream-lining the contours wherever possible.

My desire to use fixed conventional tricycle gear was primarily to keep the expense and weight to a minimum, so an extra effort was required to keep the airframe drag down. The fuselage lines are very similar to the Bridi UFO (oz6024). The graceful lines of that strikingly beautiful aircraft provided the inspiration for Alpha's lines. The side view was duplicated as closely as possible while maintaining the proper moments and lateral area distribution to insure balance without ballast and good knife-edge flight characteristics.

I suppose that I should mention at this time that I hold a Doctorate in Aeronautics and have designed and scratch-built over 20 original RC aircraft in the past seven years. My professional experience in the field of airfoil design was put to good use on all of Alpha's predecessors, and the progressive airfoils used on designing Alpha's wing, when coupled with the particular wing planform chosen, eliminates the possibility of tip stall and provides a lift distribution which mini-mizes the loading at the root. The net advantage is a more slender wing which can be built much lighter than most you will see on acrobatic aircraft this size.

The extra effort spent in designing the structure paid off. The overall weight with Cirrus radio is only 4.5 pounds. The resulting comparatively low wing loading makes for nice slow landings and very smooth takeoffs. In fact, one could even install retracts, if that's your bag, and still have a wing loading in the nice-and-easy category. Flight characteristics will be discussed later..." 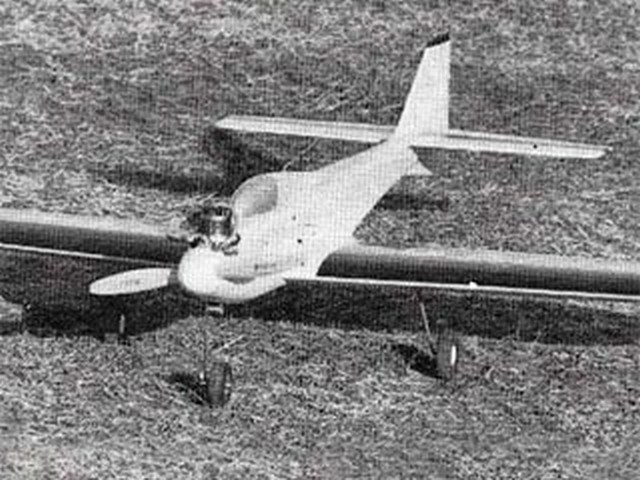