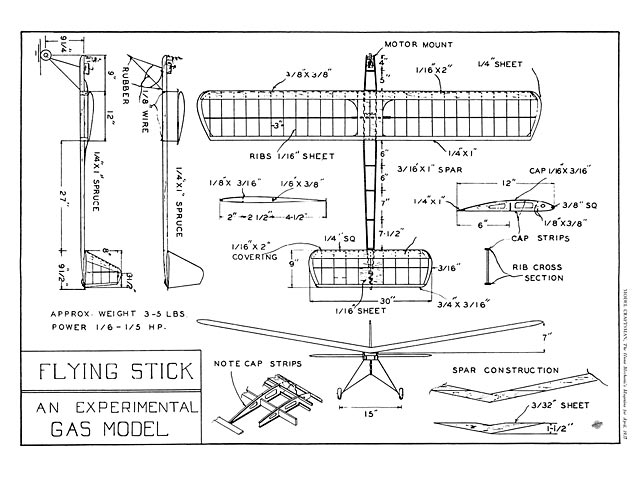 Quote: "We hope that the stick model will open a field of experimentation to the veteran builder as well as provide a stepping stone for the beginner. What better way is there to familiarize oneself with the habits of a gas model than the construction of a stick model and the flying thereof? True, they are not much to look at. but they are simple to build, cost little, and fly well. The cost of a good stick model (excluding motor) should not be more than a few dollars.

It is because of the simple construction, little inconvenience caused, and little skill (if we may take the liberty of calling it that) required that stick models are good for the beginner. By conducting experiments with regard to torque compensations and incidence setups, much valuable data and experience may be gained by the expert as well as the beginner. A stick model also provides one with many pleasurable moments as they may be literally flown to death.

Another advantage of the stick-job is the charm that it seems to carry with it when it flies. The fact remains that they hardly ever suffer from a major crack up. Perhaps it is that we are much more carefree with them than we are with the average plane, the reason for this being that we have much less to risk. I still recall seeing Larry Low's seven foot stick job giving some trees acute case of 'scareitis' as it glided down to land right between them. It not only did this once but repeated the performance for the benefit of the onlookers.

Incidentally, Larry's plane was built in one day. One day he felt a sudden urge to fly a gas model and, having an extra set of wing and tail surfaces about the shop, he proceeded to build a stick model. The result was invigorating, for it gave him many hours of enjoyment especially considering the little time spent.

These plans are offered as a suggestion rather than a cut and dried design. It is our wish that people would rather design their own crates or at least add some improvements to these. The plane as shown on the drawing is very simple in construction and can be made even more simply by omitting some of the details. The wing and tail have no taper which makes the construction of them an easy matter, the wing tips are also a simple affair. Now to get down to the construction.

The fuselage consists of two members of 1/4 by 1in hard wood, preferably spruce. These two members are joined together by intermediate braces, the location of which you will find on the plans. They are held in place by thin wire brads and a generous bit of glue, that is at least three coats..." 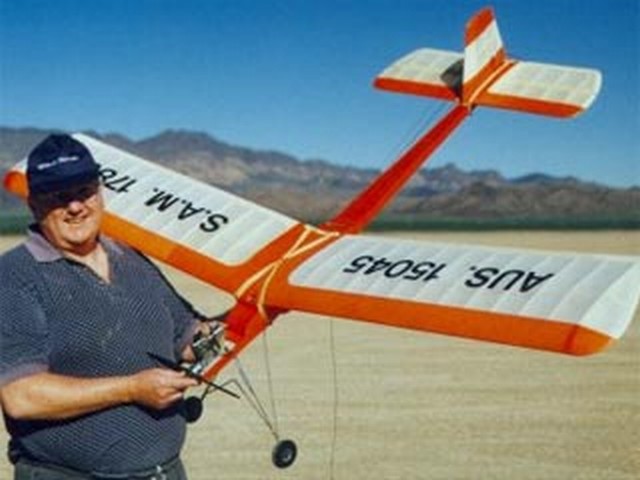