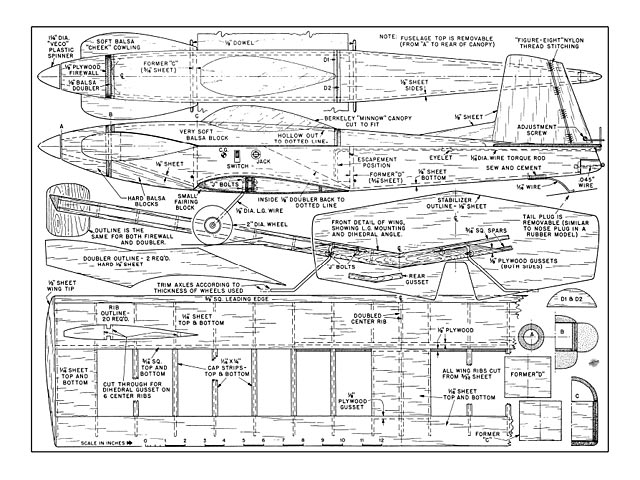 Quote: "Radio controlled pylon racing with pit stops by Half-A powered planes is latest experiment by the SLOW Club of Washington DC. This job really gets around!

Just picture this: there you are, transmitter in hand, your pylon racer has just become airborne, and you head for that #1 pylon. Oops - that was a little wide of the mark so you bear down on pylon #2 more accurately now, but this time you cut it too close. So on #3 you've just about timed your 'keying' right; on you go, round and round. The 1/2 ounce tank doesn't hold much, so there's a pit-stop coming up soon. You leave the transmitter on and quickly refuel - on smooth ground you start up and prepare to ROG (on rough ground you'll lose precious moments in getting back to the take-off area, but that contributes to the excitement). Time for the flight is scored from the initial release until you cross the finish line after the last lap, so you can see it is quite exciting, what with the pit-stops required by the intentionally small fuel tank.

These 36 in span 1/2A Pylon Racers are really exciting, and it does not hurt financially, either. It is really pylon R/C flying on a small budget - you'll be amazed at how much fun the triangular course is. Visually the models are exciting what with their bright colors and large racing numbers. If that isn't enough, give serious thought to the fact that these jobs require little flying space and are quiet compared to the .19 to .29 jobs flown in many areas. Important factors to consider, as many, many flying sites have been lost due to the encroachment of constant building developments or from complaints regarding the noise developed by larger engines. Even a 'hot' 1/2A doesn't hold a candle to a .29 as regards noise, so let's get going on making a Pylon-Polisher.

Medium balsa is to be used, except where noted otherwise. The fuselage sides are cut from 1/8 sheet first, and after the various formers are cut out, the assembly can be started. Do this over the top view - pin things together inverted, with the front area forward of former 'C' overhanging the workbench. The sheet bottom piece aft of the wing is cut as per the top view outline (minus the 1/8 in dimension on each side for the side sheeting). The amount of formers shown on the plans may just be considered a minimum - once the various components are mounted, additional bracing and/or formers may easily be added as you see fit. Former grain should be cross-wise for maximum strength. For the small penalty in weight, be sure to cement joints well, especially in areas of concentrated stress, such as the landing gear, spars, and nose of fuselage. Be sure to sheet in the area of the fuselage bottom that is directly over the wing, as this will be the weakest area if left uncovered.

Various blocks finish off the balance of the fuselage. In the case of the top-fuselage blocks; tack-cement them in place - once the rough shaping of the outside is accomplished, they are re-moved and hollowed out. Cap the ends of the removable top block with 1/8 sheet for strength. Also the front end of the turtle-deck section (from cockpit rear to rudder). The bottom cowl block can now be shaped..." 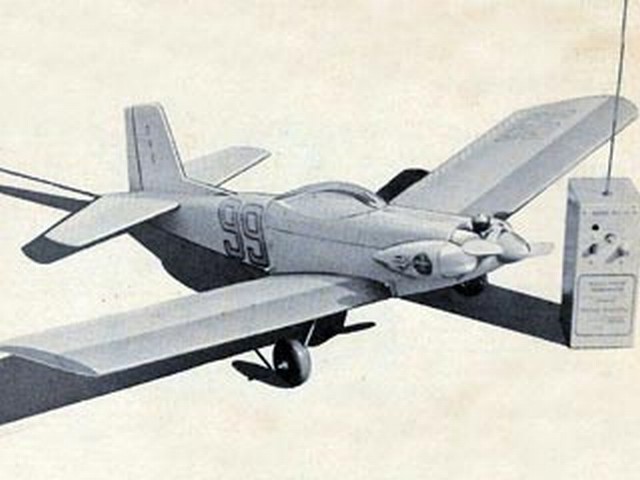