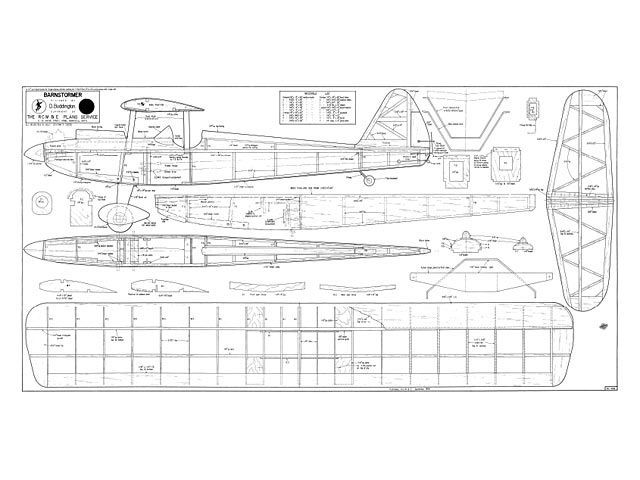 Quote: "THERE is a general and constant outcry from R/C aeromodellers for 'different' types of R/C designs to allow them to get away from the 'standard' models. Perhaps the majority of single-channel models are high wing cabin types with slab-sided fuselages, and multi models tend to be low wing bombs with tricycle undercarriages of apparent identical appearance. Perhaps, also, the average modeller does not want to go to the time and trouble of building scale models but there are problems in presenting 'out of the rut' designs.

For one thing, these types do not always have sufficiently popular appeal - and magazines must try to cater for the majority of readers - and frequently with single-channel designs, the designs do not have the flying qualities of models such as the Pal Joey (oz4719), the Robot (oz6906), the Super Sixty (oz552), the Tyro (oz558) etc. It is possible to have a different design which remains easy and pleasant to fly and, equally, be simple enough to build to appeal to a wide section of modellers.

The Barnstormer was designed with these aims in view and the prototype now in its third year of flying, has suggested that these aims have been fairly well met. With its parasol wing and open cockpit, the Barnstormer is reminiscent of aircraft of the late 1920's and early '30s', an era when aeroplanes were full of character. One problem with parasol wing models is the formation of the carbane struts, this is usually overcome by using piano wire struts faired with balsa. The bending of the piano wire has to be accurate otherwise the wing seating is out of alignment and this problem alone is enough to frighten off many would-be builders. Dural flat strip material has been used for the carbane struts on the Barnstormer; this material is easy to bend to shape (it is only bent in one plane) provided it is accurately marked.

One bonus in using a parasol wing is the high efficiency of the total wing area due to its 'clean' state and lack of fuselage wing junction drag. Despite the relatively high (12-14 sq ft) wing loading, the glide is extremely flat and the position of the wing makes for a very stable configuration. Motor control is a definite advantage with this model if only to allow slow, low fly-pasts to take full advantage of the model's attractive appearance in flight. The only trouble encountered with the prototype was the fixing of the carbane struts to the fuselage. After the model had been upturned in the long grass of our flying field a few times the struts were knocked off. The method of fixing the carbane struts has now been revised.

Take care in building the Barnstormer both accurately and strong and you will be rewarded with months of faithful service and enjoyment..."

This plan appeared in the David Boddington book 'Radio Control Primer', printed 1974. This scan of the plan is from that book. Note this is a low resolution scan.

Update 07/11/2017: Replaced this plan with a clearer copy (scanned from fullsize) thanks to AndyLuckett.

Quote: "Hi Mary and Steve, David Boddington's Barnstormer is the 'model of the meet' for F/F and R/C at Oily Hand in 2018. Here is a copy of the Aeromodeller plan for the original 1965 52in version. The one currently on Outerzone prints out poorly as it is a blow up of the page from David's book: Radio Control Primer. This one even has an oil spot to show it has been built from [edit: fixed now, see morepics 009]. That should help modellers get out the tools and build from the plan rather than let it languish as a file on their computer. At Oily Hand we expect to see about thirty Barnstormers. All diesel powered. Regards, Andy" 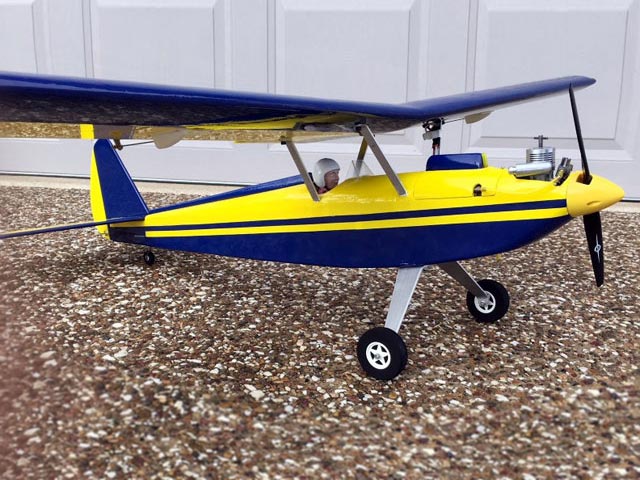 Hi Mary and Steve! It was, once again, with great joy that I saw you adding another creation of David Boddington (DB) to your Database, namely the Barnstormer. My dear friend Elias Silva built one in the 1980s and I was fortunate in flying it too, as he usually 'delegated' the test pilot functions onto me! He used two wings on his Barnstormer - first the plan one, later the wing from his Tyro Major (the dark red and black one on the photos) [model photo & more pics 004-008]. I seem to remember that the Tyro Major wing actually gave the model an even more benign flying behaviour! As the Barnstormer was to be a *training* aircraft as far as Elias was concerned, he wisely decided to change the wing's fixing method, incorporating rubber bands - I still think this is the best method to fix wings on a aircraft that might face its fair share of *arrivals*! One interesting characteristic of these Single Channel models from the great DB was the undercarriage fixed with rubber bands - a trait that was very useful when the landings became 'arrivals' as can be seen in one of the photos! In the 80s, we were naturally flying them as 3ch models with fully proportional radios, but good flying characteristics are always more than welcomed! I say '*Them*' because I mean not only the Barnstormer but also the Tyro, Tyro Major and Tinker that we flew in those days of yore. Thank You Mr DB, and Thank You, Mary and Steve, for preserving these treasures, while allowing us to enjoy them once more! I apologize for the 'less than average' photos' quality... they are slide scans and the model was rather small in most of those slides...
ArnaldoCorreia - 06/06/2017
I first came across this model in the late 1960s when we were dabbling with the single channel radio and rubber escapements etc. The subject surfaced again when it was designated as one of the 'model-of-the-meet' subjects for last year's (2018) 'Oily Hand' rallies here in Australia. I just had to build another, but this time using fool-proof modern radio gear. My model was built very much according to plan, but I decided to go four function with ailerons and throttle in addition to rudder and elevator [more pics 009, 010]. It had to be diesel powered so the engine I selected was a PAW 19 with r/c carb. Covering was regular HK plastic film. The model flew very nicely from the outset and with only minimal trimming was capable of basic aerobatics - loops, rolls, cuban eights etc. Unfortunately, after less than a dozen flights the elevator servo went u/s and the model was badly damaged and never made it to the rally.....
AlanW - 15/05/2019
I have returned to the hobby and have uncovered an almost complete Barnstormer in the loft. It was built by my late father in the 70's . Complete with MacGregor SC radio and servos.
I preferred FF sport so am building an Ebernezer for a bit of fun!
bob beaumont - 23/01/2021
Add a comment