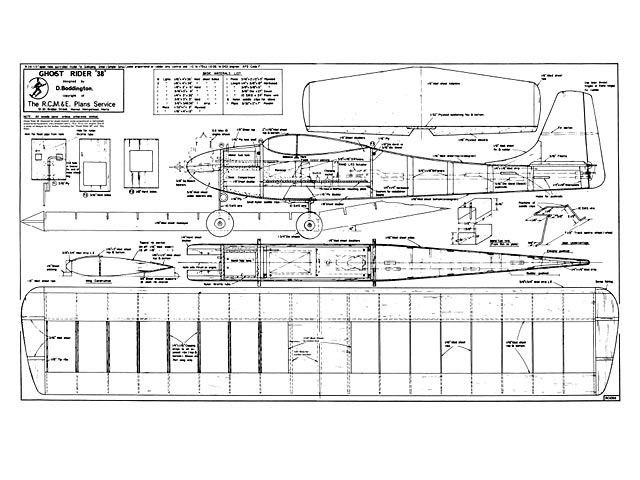 Quote: "WHEN the Ghost Rider 50 (oz7679) design was presented it was only after a certain amount of discussion and debate between the Editor and myself. Your Editor was in favour of publishing the 38 in span version, now presented here, but I stuck out for the larger model. The reason I did this was because of my doubts about the abilities of some modellers to handle the smaller model. This may all sound very conceited and your reaction will probably be - if he can fly it why cannot I? Well! I was flying the GR 38 with reasonably lightweight GG outfits (7-8 oz) and if this had been substituted by one of the outfits using dual battery supplies, heavier actuator and possibly heavier building of the model itself, it might have finished up as a vicious little beast.

So why present the design now? Since flying the models initially on GG systems I have checked them out on two function light-weight proportional equipment and the results have been well worth the time spent in installation. With a radio payload of around 11-12 oz (Rx switch harness 500 DEACs and two S4 servos) the GR 38 gives very snappy flying. Its ability to carry this complement of radio equipment does also prove that it would also take the heavier GG equipment too.

One word of warning though, the higher the wing loading the faster must be your landing approach and touch down. Slow down too much and there is the risk of reaching the stall and dropping a wing. This condition could be aided by introducing some washout to the wings but I do not believe that the characteristic is bad enough to warrant the nuisance of doing this - just get used to bringing the model in a little faster than the average sports model.

With some models you know as soon as you finish them that they are going to be 'flyers', but with others you face the flying field with great trepidation - hoping your first attempts will be totally unobserved. Fortunately the GR 38 was one of the former types and test flights quickly proved that this initial confidence was not misplaced. In fact it is one of the few models that I have been able to resist the urge to 'improve'. Most of our flying is carried out in grass fields where the length of grass and the roughness of the ground prohibits take-offs, but on the occasions that I have flown her from a tarmac strip, the way she tracks and lifts off has caused appreciative comments..." 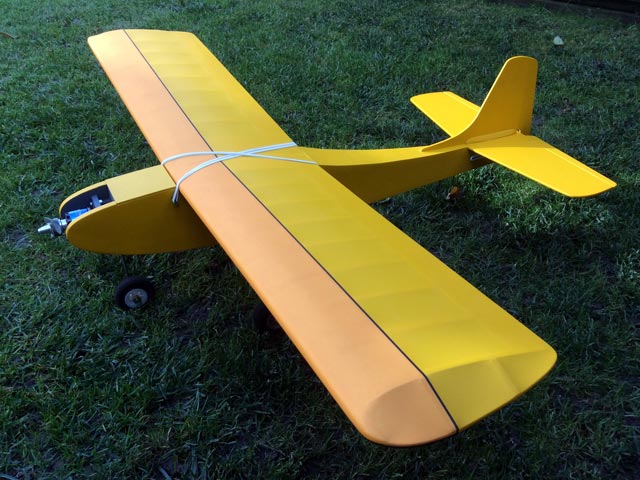