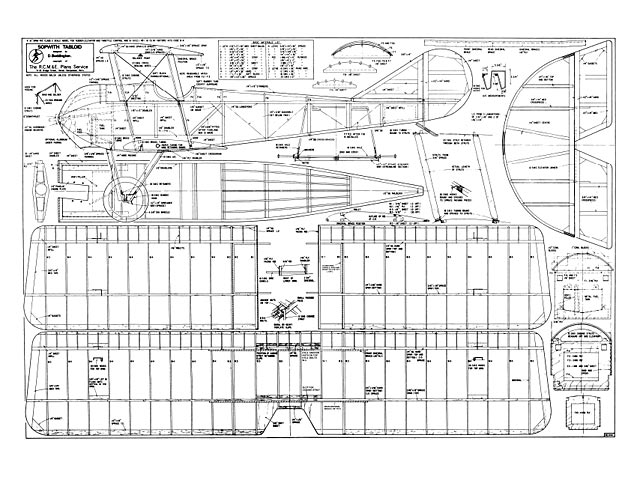 Quote: "IT is over three years now since the plans of my Sopwith Pup were published in RCME and this has proved to be a popular model with the sports/scale modeller. Because of its pleasant and easy flying characteristics (one modeller I know actually built it as a first R/C model and learnt to fly with it) I decided to follow it up with a similar design - hence the Tabloid.

Like its stablemate, the Tabloid is a Class Two scale model as it does not feature a true scale wing section and, with the prototype at least, a lot of detail was omitted. There is no reason, however, why the Tabloid should not be 'worked up' to a top scale model as the basic outlines are correct and the model proven in flying ability.

On searching through the reference books and plans for a successor to the Pup my choice was narrowed down to the Tabloid or the Martinsyde S1. The latter aircraft was very similar to the Tabloid, an obvious copy, in fact, but what decided me eventually on the Sopwith version was the report that the full-size Martinsyde was inferior in per-formance and tended to be unstable both fore and aft and laterally. Why the Martinsyde should exhibit these faults and the Tabloid, with almost identical layout, be satisfactory in flight I cannot guess, but I thought it would be prudent to opt for the more stable version.

The prototype Tabloid, built in 1913, was unique in its time for its simplicity and its performance, reaching a speed of 92 mph and a climb rate of 1,200 feet per minute - very commendable for those days. It also featured wing warping, ie no ailerons, which appealed to me from the modelling point of view, and twin skids to the undercarriage, which did not appeal to me as a modeller. Fortunately, later versions of the Tabloid were fitted with simple Vee strut undercarriages and, to help the modellers who prefer them, ailerons on the top and bottom wings.

To further add to the versatility of this little machine the prototype and production versions (known as the Sopwith Schneider) were fitted with floats. When a more powerful version of the seaplane was required, with a Clerget 110 hp rotary engine, the type became known as the 'Baby' and differed from the Schneider in the horseshoe shape cowl and enlarged fin.

At the time of designing this model I was quite actively engaged in floatplane work and it was my intention to fit floats to the Tabloid and try it off water. Regrettably, I have never made time to do this, but the Tabloid is still in one piece and perhaps I shall get around to it one day. The delightfully shaped floats, mahogany veneered, would certainly add to the appearance of the model. Incidentally, anyone contemplating building a seaplane version would be well advised to visit the Royal Navy Museum at Yeovilton in Somerset, where they have a beautiful Sopwith Baby replica. This aircraft apart, the museum is well worth a visit by any would-be scale modeller.

The prototype model was fitted with a Merco 61, with the intention of fitting floats, but this proved to be more than adequate for normal flying and a 0.45 or 0.49 engine would suffice. I hate to see a model of this type tearing around the sky and the Tabloid has a low enough wing loading to fly safely at low speeds. It is not the ideal aircraft for flying in windy weather, and, although it will cope with a stiff breeze, it is at its most pleasant in conditions of moderate winds, when flying becomes a sheer joy. I have no doubt that with this model fitted with ailerons, beefed up, and a powerful engine fitted, it would be 'flyable' in a greater range of weather conditions, but at the expense of overall stability and good slow flying characteristics. You 'pays your money and takes your pick', but I would rather forgo the occasional day's flying with the Tabloid in order to thoroughly enjoy it on a suitable day.

Construction: Time, so they say, is money, and this makes the Tabloid a quite expensive model to build. No, you cannot complete this model in a couple of evenings - any more than you can many of the so-called almost-ready-to-fly kits. It needs just a little more patience and man hours than the average sports model and if you are short of either of these ingredients, be warned, do not start building this model. Not that the Tabloid is difficult to build, far from it, and I guarantee that anyone who perseveres and completes the model will not be disappointed or consider it a waste of time. So, if you are looking for an interesting and rewarding subject for the long dark evenings forget about her and start building the Tabloid instead.

Be careful in selecting your materials, make sure the wing spars are firm, hard and straight. Keep the rear end of the model as light as possible, otherwise you may find yourself having to put a mass of lead in the nose to obtain the correct balance. I would suggest cutting out all of the balsa and plywood parts before commencing assembly, simply because this is one of the least pleasant chores and, once out of the way, then the exciting part commences.

Wire bending, of the cabane struts and undercarriage is not complex but must be accurate, if you make a mistake, throw the part away and start again. Approach the bending slowly and systematically, protecting the marks on the piano wire with Sellotape and using a wooden block to bend the wire, firmly held in a well-fixed vice.

Do avoid the temptation of 'beefing up' the construction. For one thing, it becomes a vicious circle and ends up with a model grossly overweight, almost unflyable and still not strong enough. At that point you will probably write to me to tell me that my design is at fault, as the model does not fly. The construction may look flimsy in its uncovered state, but you should take a look at a full-size aircraft, of similar type, before covering and that would terrify you.

Fuselage: Construction of the fuselage follows the basic method of building the two sides over the plan and then forming a box structure. With a very wide fuselage, such as this one, it is imperative that the curvature on the sides, as they close together on the stern block, are equal, otherwise the whole of the tail assembly will be misaligned. The cabane struts are bound and epoxied to the Formers F2 and F4 before they are positioned in the fuselage, the cross bracing wires being soldered at their lower points but not at the top. Do not omit those cross bracing wires, as they add considerably to the strength of the cabane assembly.

The purpose-made tin plate fuel tank worked very well on the original model and has the advantage of being completely outside of the general fuselage area and with no risk of fuel getting into the radio bay..."

I have just discovered the cloth and dope model I have had hanging in the workshop for many years is this ACTUAL one from the article. Everything matches, from the covering to the decals to the colour, literally everything. What a proper piece of history.
Bo - 10/06/2019
Hello my new model Sopwith Tabloid oz8773 [pics 005-007] Author Vít Pucher Czech Republic, Inspired serial Salvage Hunters.
Vitek Pucher - 06/06/2021
Add a comment